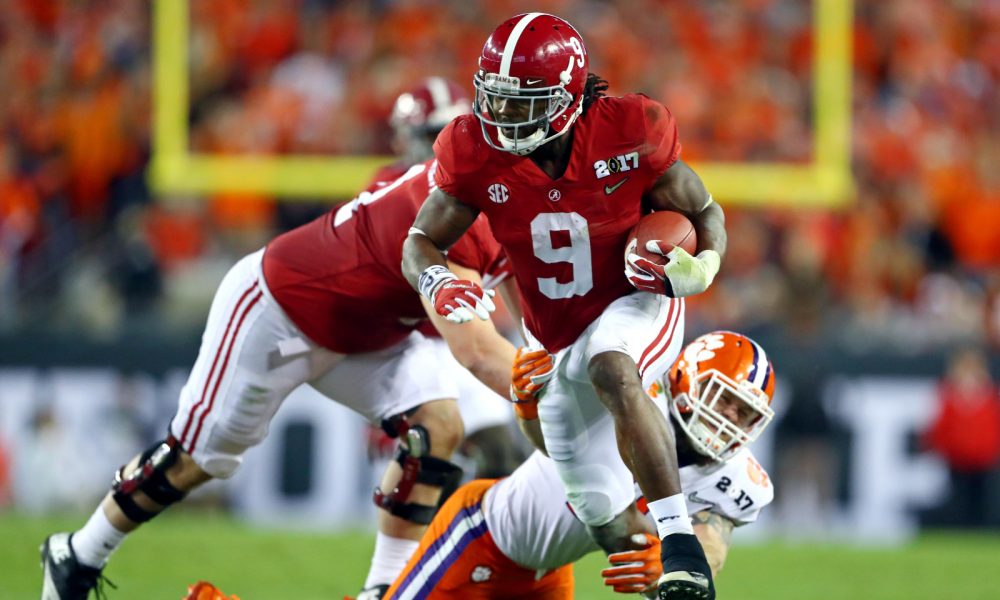 As a T-Town native, the alumnus of the University of Alabama is hosting a youth football clinic on July 10. He shared the information via Twitter as the clinic will be at Central High School and will go from 1-8 p.m. According to the flyer he posted, youth from ages 7-14 will be there from 9 a.m. to 1 p.m. Afterwards, youth from ages 14-18 will participate from 5-8 p.m.

That time has come where the best of the best show case their talent video cameras and pictures taken by vega one on ones special guests and more come showcase your talent and showcase the best of all #scars#watchis#showdown @tuscaloosanews @tuscaloosacity pic.twitter.com/KD4vELqg6U

Scarbrough said it is time to show where the best of the best come from. He was a superstar athlete at Northridge High School before spending his senior year at IMG Academy.

He totaled 1,468 rushing yards and 20 touchdowns in 10 games. The five-star recruit arrived on the Crimson Tide’s campus in 2015 and was part of a national championship team.

Scarbrough would explode onto the scene in 2016, especially in the College Football Playoff semifinal matchup against Washington.

He earned Offensive MVP honors as he pounded the Huskies for 180 yards with two scores on 19 carries. Scarbrough’s career performance allowed Alabama to earn a 24-7 victory.

He rushed for two touchdowns against Clemson in the national championship game; however, a leg injury forced him to an early exit. Scarbrough’s absence hurt the Tide as it fell, 31-35, to Deshaun Watson and the Tigers.

RELATED: A 12 team College Football Playoff is becoming more of a possibility

Scarbrough was taken in the seventh round of the 2018 NFL Draft by the Dallas Cowboys.

He was released on Oct. 9 of that year, and things did not pan out with the Jacksonville Jaguars or Seattle Seahawks. Scarbrough found a home with the Detriot Lions in 2019, but he was waived on Oct. 31. He returned to the Seahawks on Nov. 11, 2020, but he suffered a torn hamstring in the fourth quarter against the Arizona Cardinals on November 19. He was elevated to the team’s active roster for the matchup.

The injury sent him back to the practice squad four days later, and his contract with the team expired on Jan. 18, 2021. Through it all, Scarbrough has kept a positive mindset.

He’s always been about helping the next athlete.

His youth clinic will be one to enjoy.