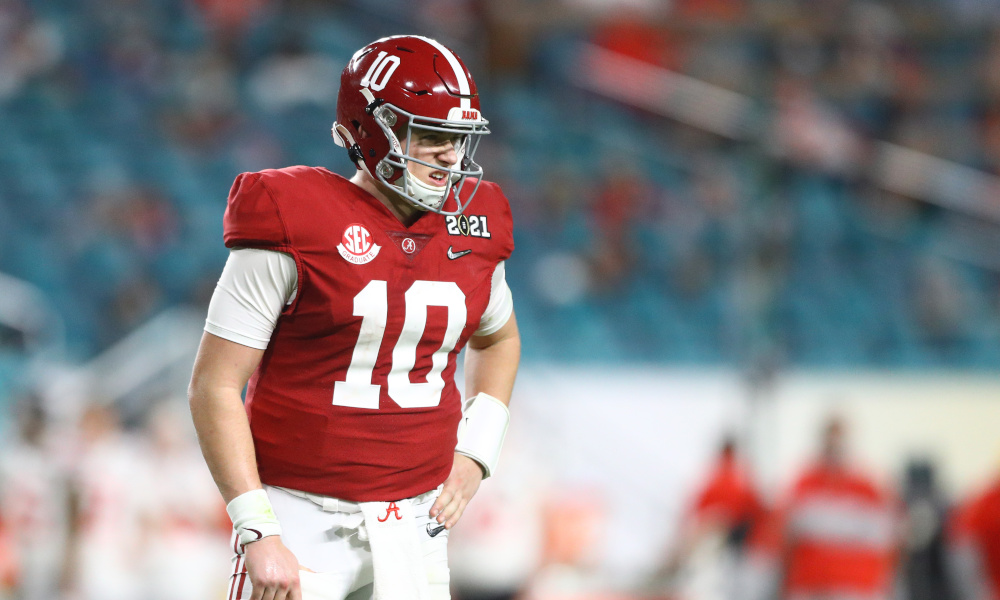 Football came to him as a child, and Mac Jones did everything to pursue a career in it.

He has a high passion for the game, and people notice how he carries himself. After proving critics wrong in high school and at the University of Alabama, the 2020 national champion is in the National Football League. Jones was taken by the New England Patriots at No. 15 overall in the NFL Draft. He was impressive at rookie minicamp, and the Patriots have increased his workload during mandatory minicamp.

A native of Jacksonville, Fla., Jones is earning the respect of everyone inside the organization. On Wednesday, he was the first player on the field for practice.

Video of Mac Jones first on the field for Patriots practice.

First on the field this morning: Mac Jones. pic.twitter.com/xr2DsMg3pG

In wearing No. 50, he did warmup exercises with the ball. Despite some horrible weather conditions, Jones has shown Bill Belichick and his coaching staff he has command of the ball and the offense. According to Alex Barth, a reporter and sports radio host for 98.5 The Sports Hub in Boston, Mass., he said Jones ‘is a very controlled, smart, and calculated player on the field.’

*Barth talks about Mac Jones’ mind and arm at the 27:20 mark

“He can use his mind and his arm to take a defense apart,” Barth said via In My Own Words.

“That is what the system is predicated on in New England. So having a quarterback who projects to be that kind of guy where maybe he’s not the playmaker Cam [Newton] is but he is going to be pick offense a little better in pre-snap, which Cam has said he struggled with. I think that is the excitement. With all the talent they have brought in around him, Mac Jones is a guy who can manage things and make sure there are not too many mistakes going on.”

Jones is developing a relationship with offensive coordinator Josh McDaniels.

Barth said the two go back and forth, and McDaniels allows Jones to give his input on things. Trent Brown, a veteran offensive tackle, told reporters that one cannot look at Jones as a young player. He sees the rookie quarterback being ‘special in the future’ for the team. Newton will start the season at quarterback; however, the Patriots will turn to Jones if he struggles.

Jones was responsible for a single-season school record in passing yards (4,500) last season for Alabama.