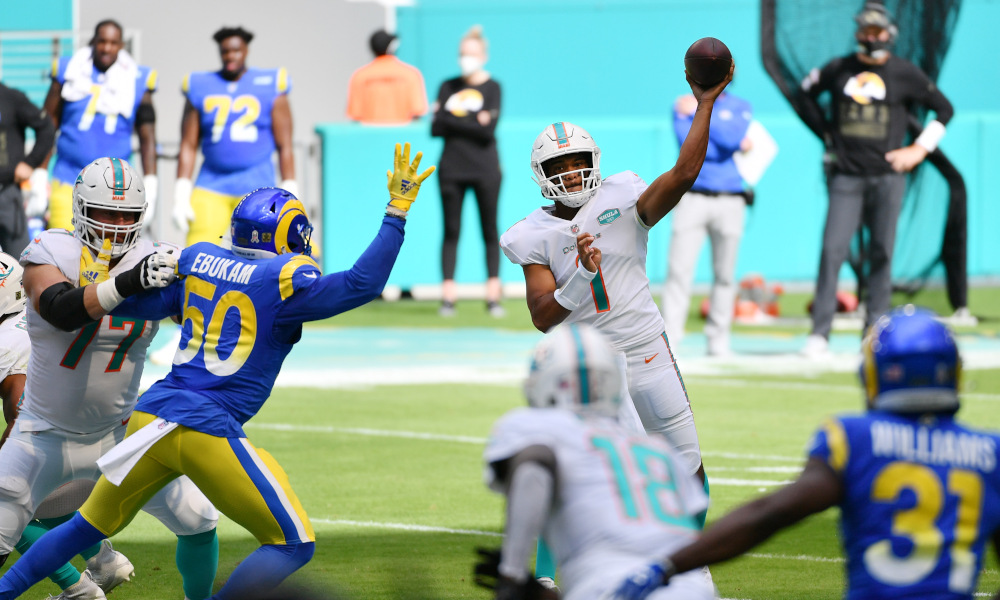 Bart Starr, Joe Namath, and Kenneth Stabler all had success in the National Football League as quarterbacks from Alabama.

All three won at least one Super Bowl and were leaders for their respective teams. It was a great moment for the Crimson Tide; however, a different narrative has been cast on the program.

In today’s society, the thought is an Alabama signal-caller does not pan out in the NFL.

Players such as John Parker Wilson, Greg McElroy, Jacob Coker, and Blake Sims did not cut in the pros.

AJ McCarron, a two-time national championship starting quarterback at Alabama, is a backup for the Atlanta Falcons. He has not had a true opportunity to show what he can do. Critics look at the Tide as a program that can not produce a winning quarterback at the NFL level.

The stigma could end this year as a trio of guys with Alabama ties are set to wake up the league.

He earned his bachelor’s degree from the University of Alabama and was on two Southeastern Conference title teams.

Hurts guided the Crimson Tide to the 2018 College Football Playoff National Championship Game, despite being benched for Tua Tagovailoa in the second half. He came off the bench in the second half of the SEC Championship Game that year and led Alabama to a 35-28 comeback victory over Georgia. After bringing life to the Eagles’ offense in 2020, Hurts has performed well thus far in training camp. The connection between him and DeVonta Smith is on point, and Eagle fans are excited about the fall.

RELATED: Tua Tagovailoa says the “it” is coming out after second practice for Dolphins

Tagovailoa is back at full strength from a horrible hip injury.

Regardless of him not knowing the playbook, he was still 6-3 as a starter for the Miami Dolphins.

He overcame complications from the injury and turned in a pair of 300-yard passing performances. Tagovailoa has been hit with much criticism, but he has been in training camp.

He stated that the “it” factor of his game is coming out. The native Hawaiian is feeling confident in his short to intermediate and vertical (deep) passing game. He has connected with multiple receivers for touchdowns, including Jaylen Waddle and Robert Foster. Tagovailoa played with both guys at Alabama, while his best year came in 2018 with Waddle.

Mac Jones is a competition with Cam Newton for the Patriots starting job.

Newton is holding the No. 1 spot, but reporters are impressed with Jones. According to ESPN’s Mike Reiss, Jones demonstrated his ability to push the ball downfield with accuracy. He’s caught the attention of coaches and teammates with the long ball he has developed since his time at Alabama. Per Reiss, Jones had the prettiest pass of training camp: a 10-yard touchdown to Kendrick Bourne at the back corner of the endzone. It was a textbook throw and Jones placed it on target to Bourne for a score.

One of the highlights of practice was opening up the passing game. The work was exclusively in the red zone the first 2 days, but today gave QBs a chance to show their long-ball skills. Mac Jones showing that he can push the ball downfield, with accuracy, on those type of plays.

After Friday’s practice, Newton told the media that Jones is ‘cool like the other side of the pillow.’

Video: Joining @SportsCenter and @JayHarrisESPN with a live report from Patriots training camp.

Cool as the other side of the pillow. pic.twitter.com/oKSzR4oyRi

“You never know when he is really down on himself, you never really know when he’s up either,” Newton said. “He really cool.”

When it comes to the music scene, Newton is impressed with how well Jones knows rap music. Bill Belichick drafted Jones for a reason.

He is building a relationship with Josh McDaniels, and Newton sees his potential.

The 2015 NFL’s Most Valuable Player may end up starting the year, but keep your eyes on Jones.

We know he is a fierce competitor who will push to the end.

All three quarterbacks are fueled by criticism. Hurts, Tagovailoa, and Jones all have doubters.

Each one is looking forward to proving themselves right and others wrong on the field.