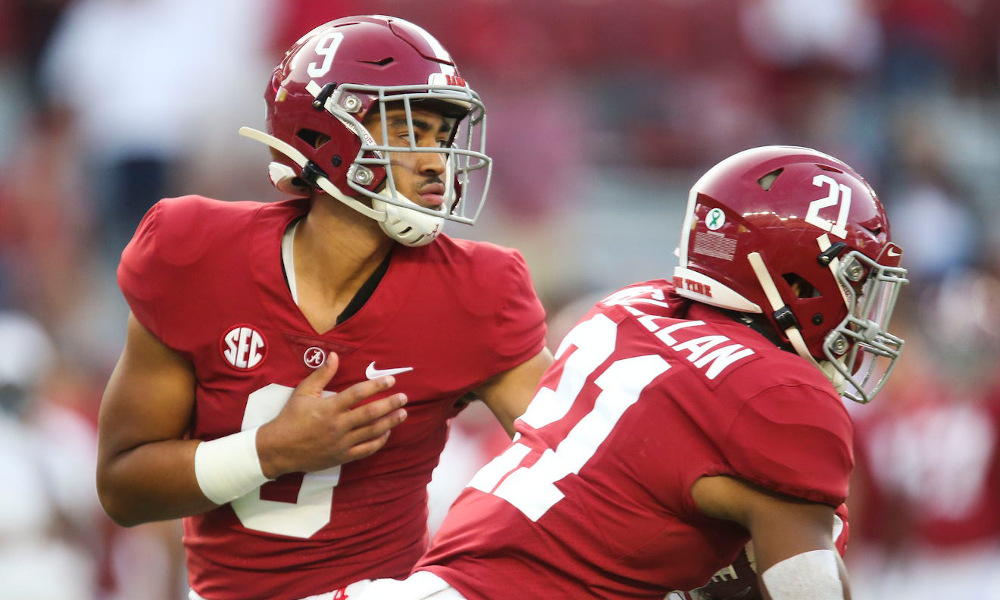 After a long summer, the Crimson Tide returns to work on Friday as it prepares for the college football season.

RELATED: Three expectations for Bill O’Brien at Alabama as an offensive coordinator

Nick Saban enters his 15th season as head coach and is pursuing his eighth national championship.

Alabama secured an undefeated campaign in 2020, but its sights are on repeating as champions for the first time since the 2011 and 2012 seasons.

Many questions surround this year’s team, especially with the players lost to the National Football League. Each year, the Tide fields a team that contends for a national title. Coach Saban was in a good mood at SEC Football Media Days, and this means he has a new group poised to make a run in the College Football Playoff.

Yours truly of Touchdown Alabama Magazine has the five biggest questions for fall camp listed below.

Bryce Young, a sophomore, will be Alabama’s starting quarterback.

Bill O’Brien replaced Steve Sarkisian as offensive coordinator and is excited to work with Young.

The intriguing conversation is between Paul Tyson and Jalen Milroe (true freshman) for a primary backup role. Tyson enters his third year in the system and has all the tools to step in and help the team. He possesses an accurate arm, a high football intelligence, and exceptional size.

RELATED: Alabama freshman WR Agiye Hall involved in a car accident, but he is okay

Milroe has impressed teammates and coaches with his strength this summer. He is a powerful runner but also possesses capabilities with his arm. Coach Saban has spoken about Milroe’s skillset, and it will be interesting to see how he is used.

The Crimson Tide had a special offensive line in 2020.

Landon Dickerson was a favorite among the fans; however, Alex Leatherwood, Deonte Brown, Emil Ekiyor Jr., and Evan Neal all helped Alabama win its second Joe Moore Award of the Saban era.

Neal, Ekiyor, and Chris Owens are back. Alabama has its center, left tackle, and right guard in place.

Saban said Javion Cohen will likely start at left guard. The sophomore is competing with Tommy Brown for a spot. If Cohen wins the job, then one position remains to be filled. Kendall Randolph and JC Latham will fight for the right tackle job.

Alabama could have its first all-black starting unit in the Saban era and school history.

3. Does a true freshman at wide receiver get a lot of action?

John Metchie is the leader in Alabama’s wide receiver room.

Slade Bolden, Jameson Williams, Javon Baker, and Traeshon Holden will have opportunities, but will a true freshman push through and get playing time? It depends on O’Brien’s play-calling; however, Tide fans were impressed with Agiye Hall’s spring game performance. Alabama also has Christian Leary and JoJo Earle that want to make plays in some capacity on offense.

Metchie said his confidence is ‘through the roof’ on all the young receivers. Amari Cooper, Calvin Ridley, Jerry Jeudy, Henry Ruggs III, DeVonta Smith, and Jaylen Waddle all showed in preseason camp as freshmen why they had to play early.

Coach Saban could not keep them off the field.

We will which freshman takes the reins.

4. Will the Crimson Tide’s defense return to dominance?

One question has owned the offseason dialogue: Will the Crimson Tide have an elite defense again?

Phidarian Mathis, a fifth-year senior, had this thought directed to him in multiple ways. The defensive lineman is confident in Pete Golding and his teammates to return to the standard.

All of the marquee players are on defense for the first time since 2017, and Alabama is deep at every position. It should have arguably the best secondary in college football, and the front line will have an improved pass rush. Tide fans have not seen a fearsome defense since 2016, but this group has them expecting great things.

5. Who wins the starting job at punter?

The hire of Drew Svoboda means a fresh start on special teams.

Jack Martin and Ty Perine will battle for the starting job at punter. Alabama has not had a consistent leg since JK Scott.

Martin had success at Troy University (before transferring), while Perine averaged 44.7 yards per punt as a true freshman in 2019. He was named to the SEC’s All-Freshman Team for his efforts, but Perine was not given a fair chance last year.

Both players are capable of hitting 50-yarders into the sky; however, consistency is important.

It is not the most discussed position battle, but the punting role is critical.