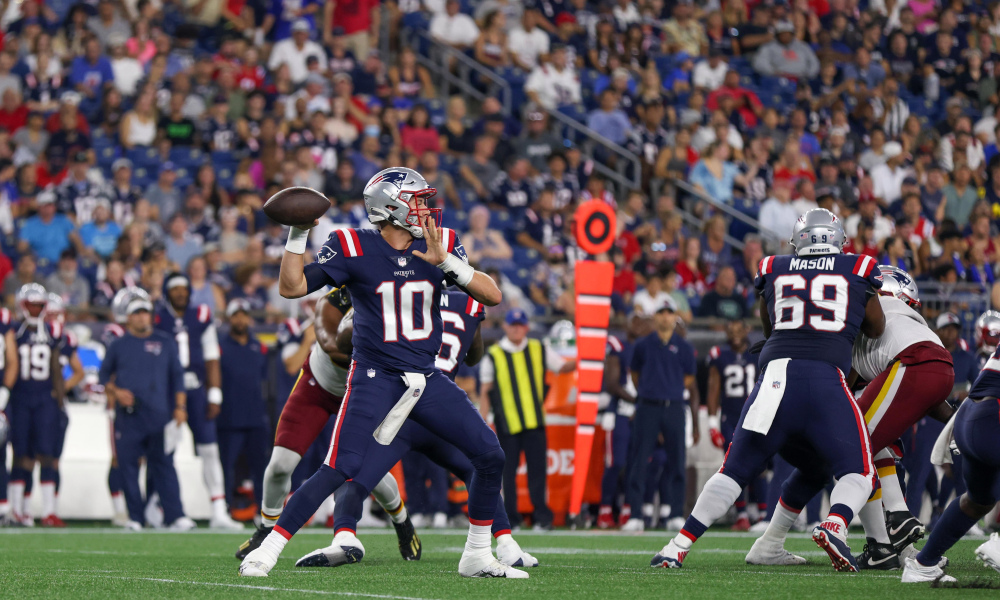 Mac Jones will be New England’s starting quarterback in 2022, but could his moment come sooner than that?

Beat reporters for the Patriots are asking themselves this question.

After taking him at No. 15 overall, Jones has been exceptional for New England through rookie minicamp, mandatory minicamp, and training camp. He’s improved each week in 7-on-7, and Patriot fans believe they have something special.

Jones played with a lot of confidence in New England’s first preseason game versus the Washington Football Team last week.

He completed 13 of 19 passes for 87 yards and nearly had a touchdown pass if not for Kristian Wilkerson dropping the ball. Josh McDaniels had Jones operating no-huddle, tempo offense.

The former Alabama quarterback converted third downs, displayed command of the system, and executed two scoring drives. McDaniels, Bill Belichick, Cam Newton, and others were pleased with the rookie signal-caller.

According to Kendrick Bourne, the Patriots’ wide receiver was ‘really impressed’ with Jones.

Trent Brown, a veteran offensive tackle, said Jones ‘can be special.’ He also said the 2020 national champion ‘can make throws that some young players cannot make.’ Chris Mason, who covers the Patriots for masslive.com, is reporting on Jones having success in 7-on-7 and 11-on-11 in joint practices with the Philadelphia Eagles.

Both teams will play each other Thursday.

Mac Jones just turned in a strong 7-on-7 period. Went 5-for-6 with a drop and hit Nelson Agholor for a deep TD. WR shook wide open.

Another 11-on-11 period, another deep Mac Jones to Nelson Agholor connection.

Jeff Howe, Patriots beat writer for The Athletic, crafted a piece on Jones becoming the eventual starting quarterback for New England. He sees the 2020 Consensus All-American starting in 2022, but said this week determines if he starts this fall.

Alex Barth, who covers the Patriots for 98.5 The Sports Hub, confirmed with yours truly of Touchdown Alabama Magazine that Jones is the eventual starter for the team. He said the question is the time frame. New England likes what it has seen from Jones, and it feels like it has someone to win Super Bowls in the future.

He will be ready when his time comes, but it might be sooner than later.