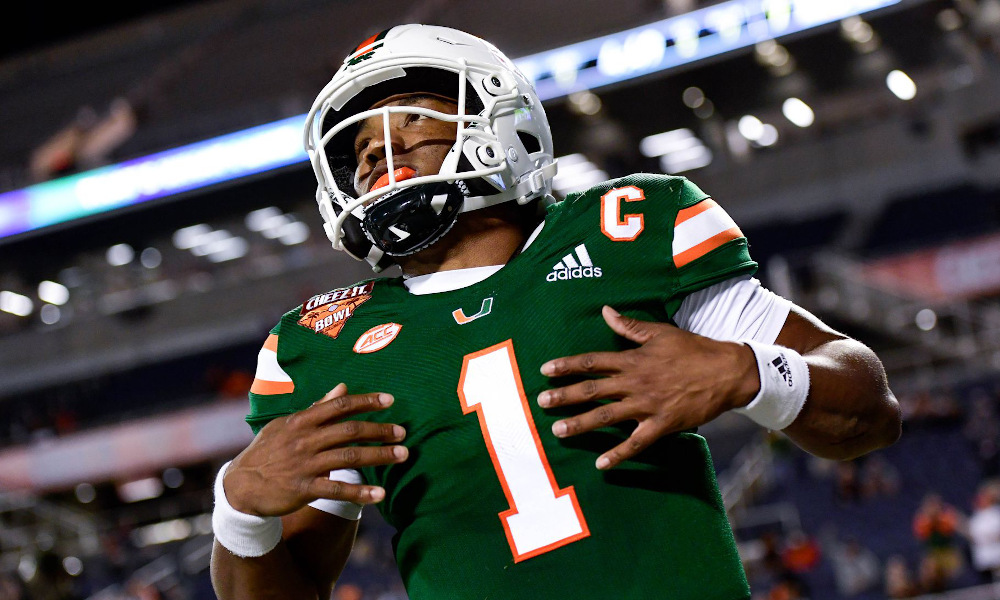 Manny Diaz is in his seventh season at the University of Miami and third as its head football coach.

Last year, he guided the Hurricanes to an 8-3 record. Despite falling to Oklahoma State in its bowl game, there is much excitement in South Florida. Miami opens the season ranked 15th in the nation and will take on Alabama this weekend at Mercedes-Benz Stadium.

ABC will air the matchup at 2:30 p.m. as Nick Saban goes for his 11th win in marquee season openers. The Crimson Tide is trying to repeat as national champions for the first time since 2011 and 2012.

Miami has talent across the board, and today we preview their impact players for the contest.

During his interview with ESPN’s Stephen A. Smith, D’Eriq King said he felt ‘super confident’ about facing Alabama.

Coach Saban said King will present a challenge to the Crimson Tide’s defense. He is athletic, he can extend plays, he can operate off-script, and King has a strong arm. The 5-foot-11, 195-pounder gives the ‘Canes energy on offense. Last season, he created an impact as a transfer via the University of Houston. King recorded 27 total touchdowns, including four rushing scores.

Coach Diaz will try to get King on the perimeter and have him frustrate Alabama’s defense.

Opponents were able to rip huge plays up the middle or bounce runs outside. Snoop Conner and Jerrion Ealy of Ole Miss both totaled 100 yards each versus Alabama. Cam’Ron Harris had a strong junior campaign for Miami. He averaged five yards per carry and collected 10 rushing touchdowns. Harris posted 643 yards rushing on 126 carries, and it will be interesting to see how many opportunities he gets versus the Tide.

The Hurricanes want to have balance on offense, and Harris provides it to them.

Miami has a combination of veteran receivers and young talent, but Mike Harley is the leader.

He turned in three 100-yard performances in 2020 and averaged 14 yards per catch.

The 5-foot-11, 182-pounder led the Hurricanes for receptions (57) and yards (799) while scoring seven touchdowns. He is a smooth route runner who brings explosive playmaking abilities to the offense. Harley can also make contested catches on 50/50 balls from King.

Jordan averaged 15.2 yards per catch, and he gives King a huge target at 6’3″ and 245 pounds. Miami brought in a transfer from Oklahoma in Charleston Rambo.

Defensively, the Hurricanes are anchored by Bubba Bolden.

As a senior, the veteran safety led the defense in tackles (74) in 2020. He was credited with 6.5 tackles for loss, one sack, three pass breakups, four forced fumbles, and one interception.

Bolden likes to force turnovers, and he’s physical against the run.

The legacy of the Blades’ family in Miami continues with Al Blades Jr. His father, Al Blades Sr., and his uncles all played for the ‘Canes.

Blades, like his family members before him, is a physical cornerback.

The junior linebacker had nine tackles for loss and two sacks last year. He had four breakups, a quarterback hurry, and 59 total tackles.

Frierson plays the “Striker” position, and this means Diaz could send him to pressure Alabama quarterback Bryce Young. Also, Bradley Jennings Jr. is a threat at linebacker. He had 7.5 tackles for loss and three sacks in 2020.