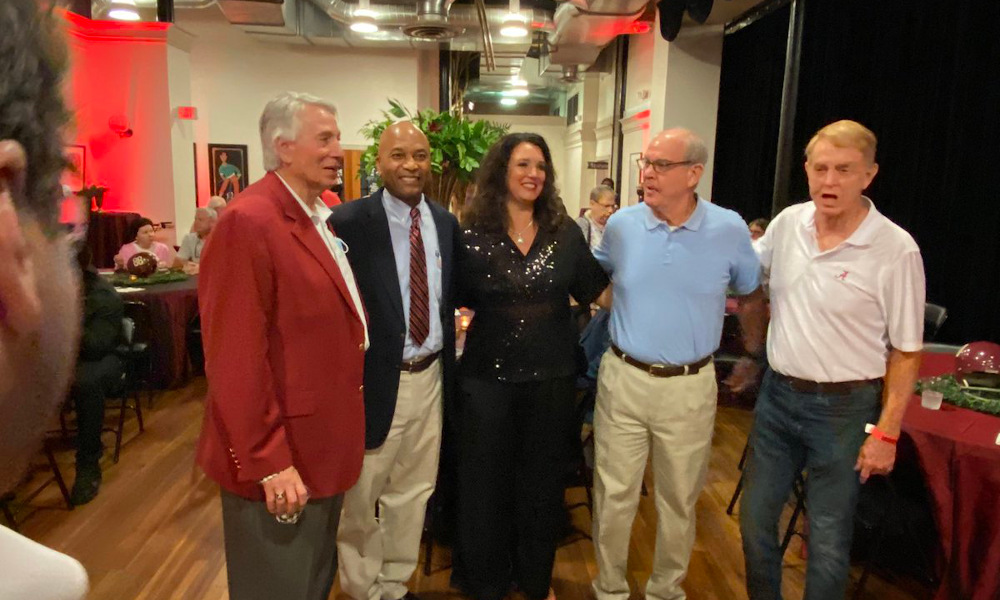 He had a passion for football since he was two years old.

He carried a pen behind his ear and a notepad in hand. His excitement grew from yelling at ESPN as a toddler to covering Alabama football.

Despite all he has accomplished in this current dynasty, Alabama’s greatest moments came before he was considered. People credited Nick Saban for evolving with the times. He has changed recruiting tactics, embraced the new-aged offense, and brought in a different form of strength and conditioning. This delivered the Crimson Tide to three national championships in the College Football Playoff era, including one last season to conclude a perfect year for the 69-year-old.

Last week, yours truly of Touchdown Alabama Magazine was at the Bama Theatre.

I have always been intrigued by history, so when the opportunity presented itself to watch the iconic documentary “Wishbone Boys,” I had to take it.

Before Saban, Paul Bryant’s foresight put Alabama on the map. We want to be ahead of the curve as people, no matter what the situation is.

He won three national titles (1961, 1964-65) running a pro-style offense, but Coach Bryant felt something was missing.

A pair of 6-5 finishes were not acceptable for a program that started becoming accustomed to holding trophies. Defenses had caught on to the pro-style scheme, and Bryant knew the only way to maintain an edge was to do something drastic.

After speaking with different coaches and gathering ideas, he brought something that altered the temperature in the room for his assistant coaches and players. He was about heart and effort, but Bryant wanted to win and he knew the players and fans wanted to win.

During moments of secrecy in practice, hiding its new offense from everyone, Alabama surprised the college football landscape with the Wishbone in 1971. He suffered an embarrassing 21-42 defeat against the Southern California (USC) Trojans in 1970, but USC was in for a rude awakening. The new-look offense rejuvenated Bryant, and his team went to Los Angeles and beat the No. 5 team in the nation (17-10) in 1971. Alabama’s marquee victory elevated confidence in Bryant. Under the leadership of Mal Moore as offensive coordinator, the Tide dominated the sport with the Wishbone offense for 12 years. Before the change, Alabama had three national titles and four Southeastern Conference titles.

He had players that made sure the Wishbone worked to perfection. It was not easy for Johnny Musso, Tony Nathan, Terry Davis, Walter Lewis, Richard Todd, Jeff Rutledge, Gary Rutledge, Steadman Shealy, Ozzie Newsome, Major Ogilvie, John Hannah, Sylvester Croom, Wilbur Jackson, John Mitchell, and others, but they believed in Bryant and each other. Quarterbacks did not have many opportunities to throw the ball in the Wishbone, but they got beat up a lot.

Regardless of the hits, Davis, Lewis, Todd, the Rutledge brothers, and Shealy stayed focus on winning national championships. It was a magical time for Mal Moore and Bryant as the focal leaders. Alabama captured 10+ wins in nine of 12 seasons with the Wishbone.

The offense landed many players in the National Football League, Alabama Sports Hall of Fame, and the College Football Hall of Fame.

Throughout the night on Saturday, people spoke to me about how revolutionary the Wishbone was. Some talked about Coach Bryant’s genius decision, while others pondered on would the offense be successful in today’s game.

In speaking with Richard Todd, the 1973 national champion told me that the excitement of winning is how the Wishbone changed his life.

Alabama almost brought in Condredge Holloway for the Wishbone, but Todd is happy he chose Tennessee.

“He wanted to come to Alabama, but Coach Bryant did not guarantee him to play quarterback,” Todd said. “If Holloway would have come here, he would have beaten all of us out. He was the best runner and thrower I had ever seen. So, I am glad he did not come here because he was amazing.”

Alabama secured a perfect season in 1979 with the Wishbone, going 12-0 and winning the national championship against No. 6 Arkansas in the Sugar Bowl. Todd said it was not hard for Bryant to get players to buy into the offense.

When it comes to similarities between Bryant and Saban, Todd said both checked the discipline box.

In reflecting on the passionate 2-year-old, I was the child.

The production of Tim Card and A.P. Steadham to bring the “Wishbone Boys” to life was special.

This came before my time; nevertheless, it is a moment to hold on to. Alabama does not have its pedigree in college football without the Wishbone and the men that ran it.