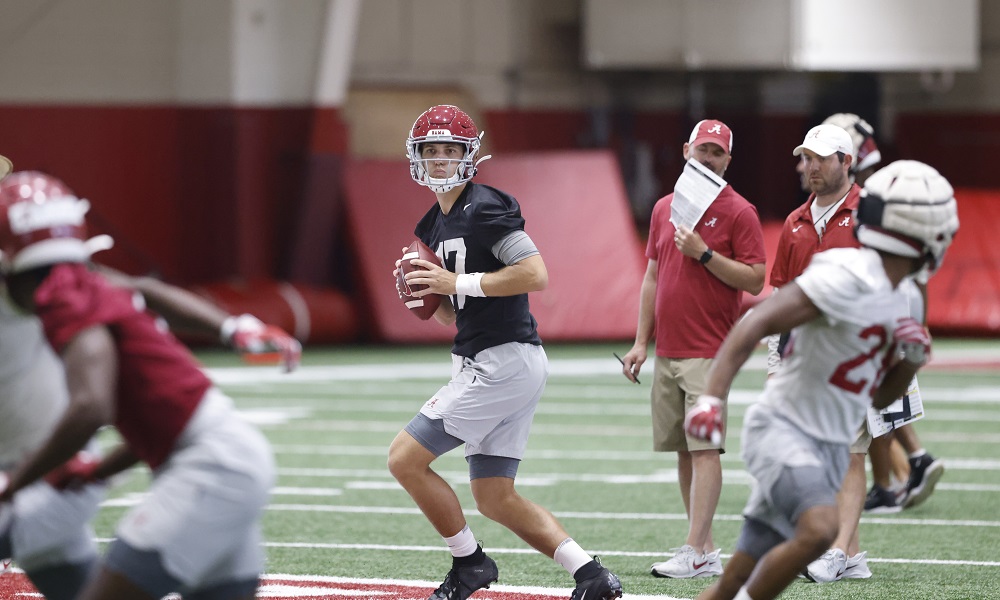 Nick Saban and Alabama football will probably learn more about itself playing Mercer at Bryant-Denny Stadium than any other opponent this season.

The backup quarterback role is one of the multiple storylines for the Crimson Tide.

Bryce Young is the starter, but who else can prove it’s capable of running Alabama’s offense if something happened to the sophomore?

This question is one Tide fans hope Paul Tyson answers before the team faces Florida next week. A redshirt sophomore from Trussville, Ala., Tyson arrived as a four-star from Hewitt-Trussville High School in the 2019 class.

The 6-foot-5, 228-pounder has the tools to be a good player, but the coaching staff has to witness it on the field. According to sources, yours truly of Touchdown Alabama Magazine learned on Friday that Tyson will get ‘significant action’ against the Bears.

We have seen the importance of the backup quarterback during Saban’s tenure at Alabama.

Whether it was Blake Sims, Jacob Coker, Jalen Hurts, Tua Tagovailoa, or Mac Jones, the No. 2 guy must be ready at all times. When Tagovailoa suffered a hip injury in 2019, Jones filled in and performed well versus Arkansas, Auburn, and Michigan.

Tagovailoa came off the bench as a freshman in the 2018 College Football Playoff National Championship Game versus Georiga and delivered the Tide to a national championship.

During the SEC Championship Game in 2018, Jalen Hurts emerged off the bench in the fourth quarter and guided Alabama to a 35-28 comeback victory over the Bulldogs.

The conference-only schedule in 2020 prevented us from seeing more of Young during Alabama’s national championship season.

In returning to a normal schedule, it is matchups against lower-tier competition that present Tyson with a chance to display his skill set.

He is the great-grandson of legendary head coach Paul W. “Bear” Bryant; however, Tyson is eager to show he is more than a legacy name.

Hopefully, he will get reps with the first-team offense to build confidence and continuity with the group.

Jalen Milroe, a true freshman, is also in the backup competition, and he is very talented.

Tyson has a chance to impress teammates, coaches, and fans. If it is not the case with him, Alabama will look to Milroe moving forward.