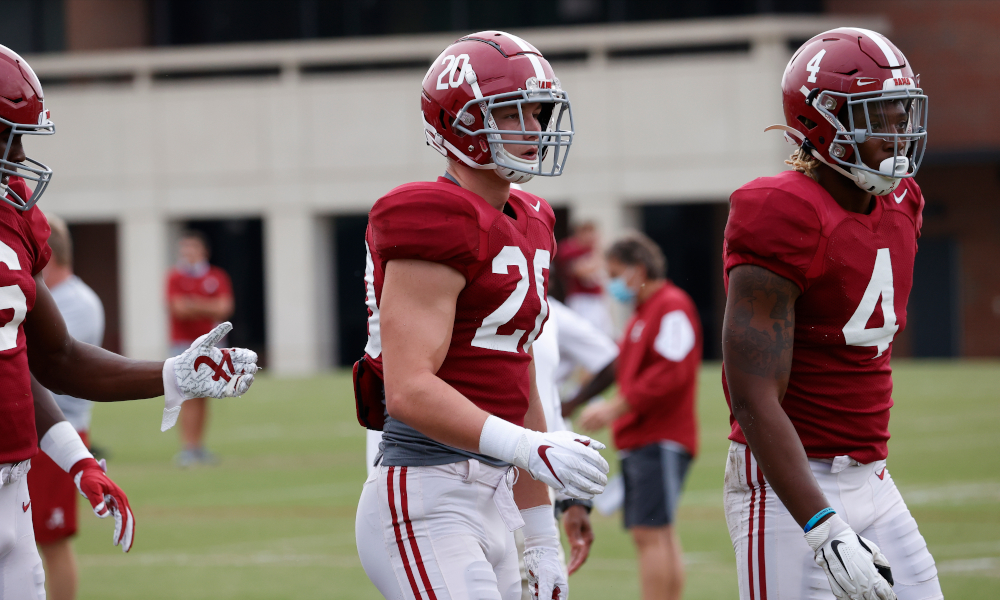 Alabama will get its starters some work against Mercer, but this week will be about building confidence for young players.

The injury to Christopher Allen (foot) opens Drew Sanders at outside linebacker; however, Chris Braswell and Dallas Turner will see reps too. Both players, like Sanders, came to the Crimson Tide as five-star athletes. Ga’Quincy “Kool-Aid” McKinstry, a five-star cornerback, will also play versus the Bears at Bryant-Denny Stadium. He did not see action last week, but McKinstry was good in spring practice and fall camp. Nick Saban wants assignment football on offense and defense; nevertheless, he wants young guys worked in too. During his weekly radio show, Coach Saban explained the importance of Braswell and Turner.

“(Chris) Braswell and Dallas Turner are gonna be two young guys that we have a lot of high hopes for that we think are really good young players that are now gonna get a greater opportunity to play because of losing Chris Allen,” Saban said Thursday.

Braswell, a native of Baltimore, Md., had an exceptional A-Day performance.

He totaled five tackles, including three for loss and three sacks. The sophomore also forced a fumble that linebacker Jaylen Moody recovered for a touchdown. Braswell added 20 pounds to his 6’3″ frame over the summer, moving from 220 to 240.

He now has the physicality to win the edge against the run while being a good pass rusher.

Saban stated after the spring game that Alabama needed to create a role for Braswell. Turner, who hails from Fort Lauderdale, Fla., played at American Heritage and St. Thomas Aquinas High School. The 6-foot-4, 245-pounder recorded 36 tackles, including 25 for loss with 13 sacks in 2020 at St. Thomas Aquinas. Turner had a good preseason camp and can provide production as a pass rusher. McKinstry had a couple of pass breakups, one interception, and a fumble recovery in the spring game.

He has a NIL deal with the Kool-Aid brand and looks to have an impactful season.

“Kool-Aid (McKinstry), I think, will probably get some opportunity to play in this game this week, has a chance to be a pretty good player in the secondary,” Saban said Thursday.

Alabama fans are excited about Sanders, Braswell, Turner, and McKinstry.