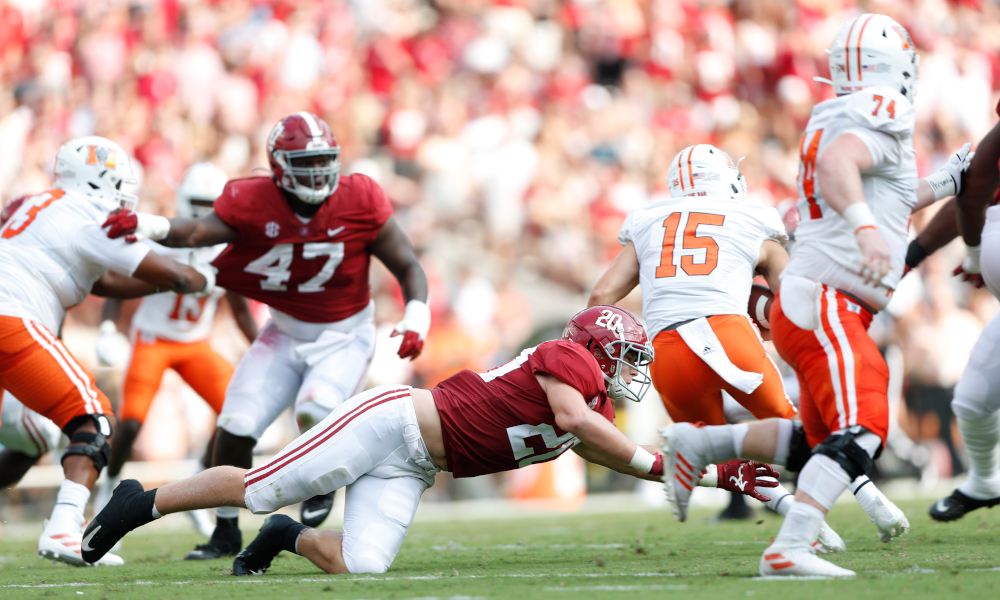 Before its home opener against Mercer, Nick Saban told local reporters that Alabama would feature some young players in the matchup. A few names on defense earned an opportunity to emerge, and they did not disappoint fans at Bryant-Denny Stadium in a 48-14 victory.

Drew Sanders, a sophomore, started at outside linebacker.

The 6-foot-5, 244-pounder replaced an injured Christopher Allen (foot) and did a great job setting the edge.

Mercer could not get outside of Sanders on run plays, as it totaled 48 yards on 38 carries. He recorded two tackles and two pass breakups while pressuring Fred Payton at quarterback. Sanders, a former five-star recruit, was all over the field.

Coach Saban mentioned last week that the team has confidence in him, but it was good to see Sanders perform well.

The five-star replaced Josh Jobe and tied for second in total tackles (six). He collected a pass breakup and his first career interception. Sanders tipped one of Payton’s throws, and McKinstry made the play.  He and DJ Dale both celebrated on the sideline. Despite giving up a touchdown, McKinstry played well. In his post-game presser, Saban said McKinstry did ‘fine.’

“He knew the game plan. He prepared well,” he said. “He played well in the game.”

Chris Braswell, a sophomore, replaced an injured Will Anderson in the second half.

Anderson sustained a lower leg (knee) injury and did not return for the rest of the game. Braswell, a former five-star, had three tackles, a quarterback hurry, and a blocked punt that Jase McClellan returned for a touchdown. The 6-foot-3, 240-pounder did well in the offseason, and Saban said after spring practice that the coaching staff needed to find a role for Braswell.

He started in place of Jalyn Armour-Davis and tallied his first career pick. Banks, a native Texan, totaled four tackles. Alabama’s young defensive players assisted the team to three sacks, eight tackles for loss, two interceptions, and five breakups. The Crimson Tide has to clean up its penalties, but it will be ready to battle Florida on Saturday to open its Southeastern Conference schedule.