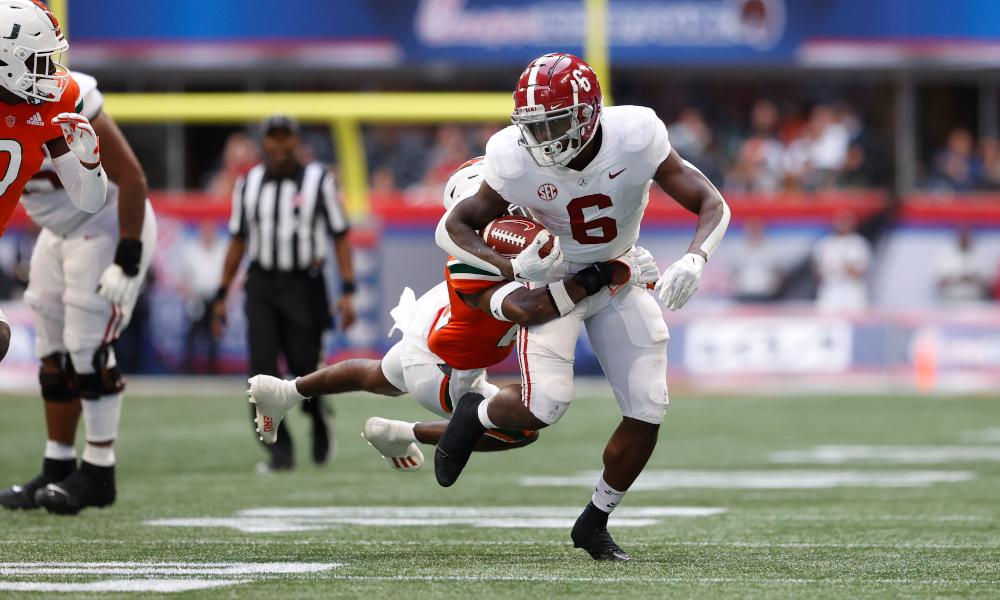 One of the strangest things that happened in Alabama’s matchup against Florida was not seeing Trey Sanders on the field.

As a former five-star, the sophomore running back is a Florida native. Before signing his letter of intent for the Tide in 2019, he was a star at IMG Academy. Sanders can be the most versatile player in school history at the position, so it was perplexing for fans not to see him play.

During the game, the CBS cameras showed him on Alabama’s sideline looking disappointed.

Several reasons could have led to his expression — including the Crimson Tide’s offensive and defensive struggles after the first quarter. Whatever the case might have been, Sanders was prepared to contribute. Nick Saban has been fond of the third-year player.

He has raved about Sanders’ toughness, dedication, and desire to want football and be with his teammates.

RELATED: Will Anderson on Tide defense: “We need to play to the Alabama standard.”

The 6-foot, 214-pounder returned from two injuries, especially a car accident that left him with a hip situation. After missing time in 2019 and 2020, Sanders played well versus Miami and Mercer.

He recorded his first rushing touchdown against the Hurricanes and celebrated with Alabama’s training staff, medical staff, coaching staff, and teammates. He averaged 5.1 yards per carry, while his score came on a 20-yard run. Sanders finished the matchup with 41 yards on eight carries. He had seven rushing attempts in the home opener against Mercer for 30 yards.

Coach Saban wants to get Sanders more opportunities. He knows the offensive weapon he is, especially with Sanders healthy.

Since he arrived on campus, fans have wanted to see the talented ball carrier dominate.

If he was indeed frustrated, then not seeing action was the reason behind Sanders’ body language.

Hopefully, Alabama will have him on the field this weekend.