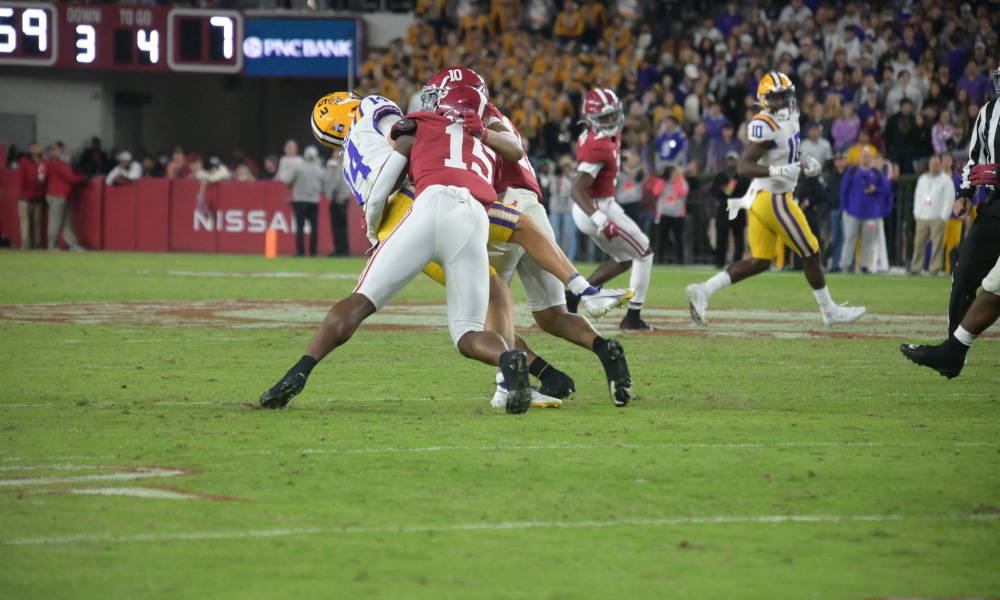 Will Anderson is an established force in college football, but Alabama fans saw something special versus LSU.

Dallas Turner, a true freshman, grew up in a marquee Southeastern Conference game.

He’s been starting in place of Drew Sanders (hand) since the Texas A&M game. The sophomore from Texas saw action against the Tigers; however, Turner grabbed the moment at Bryant-Denny Stadium to emerge. He brought energy and effort on defense, especially during the second half.

RELATED: Alabama moves ahead of Cincinnati in one national poll

The 6-foot-4, 245-pounder recorded two of the five sacks Alabama had of LSU quarterback Max Johnson. Turner made Johnson uncomfortable all game. He assisted the Crimson Tide to eight quarterback hurries and eight tackles for loss. Turner collected two tackles for loss and five total tackles. His pressure helped Jalyn Armour-Davis tally an interception off Johnson for the Tide.

Despite some big plays on fourth down, LSU converted three of 11 attempts on third down in the second half. After the contest, Coach Nick Saban was pleased with the combination of Anderson and Turner.

“Those guys did a great job,” Saban said. “We affected the quarterback, and that’s something you want to do. We had a couple of batted balls, we had 3.5 to four sacks, and we got some pressure — especially in the second half when we needed it. Those guys did an outstanding job.”

RELATED: Nick Saban shares why DB Kool-Aid McKinstry got the start vs LSU

During the summer, Anderson highlighted Turner as one of the young players growing on defense. He told reporters that he was proud of how the freshman handled himself.

“He comes to practice every day and works hard,” Anderson said of Turner. “He watches film all the time and asks questions. He wants to learn. Football is the most important thing to him. I am so proud of him. He is stepping up and took a big role when we had people down. He loves football, and he is hungry.”

“He is a physical guy,” Harris said of Turner. “He’s smart, and I can see how he’s been working since summer. When guys went down, he stepped up and took ownership of his role. He’s doing a great job right now, and we are going to get better.”

Anderson inspired Turner to choose Alabama after seeing what the native Georgian did as a freshman.

Anderson did not record his first sack until the eighth game versus Auburn in 2020. He took off from there, ending his Freshman All-SEC and Freshman All-American season with seven sacks. Turner’s first sack came in the Crimson Tide’s ninth matchup in a meeting with LSU.

He is following the trajectory of Anderson is growing as Alabama’s next special pass rusher on defense.