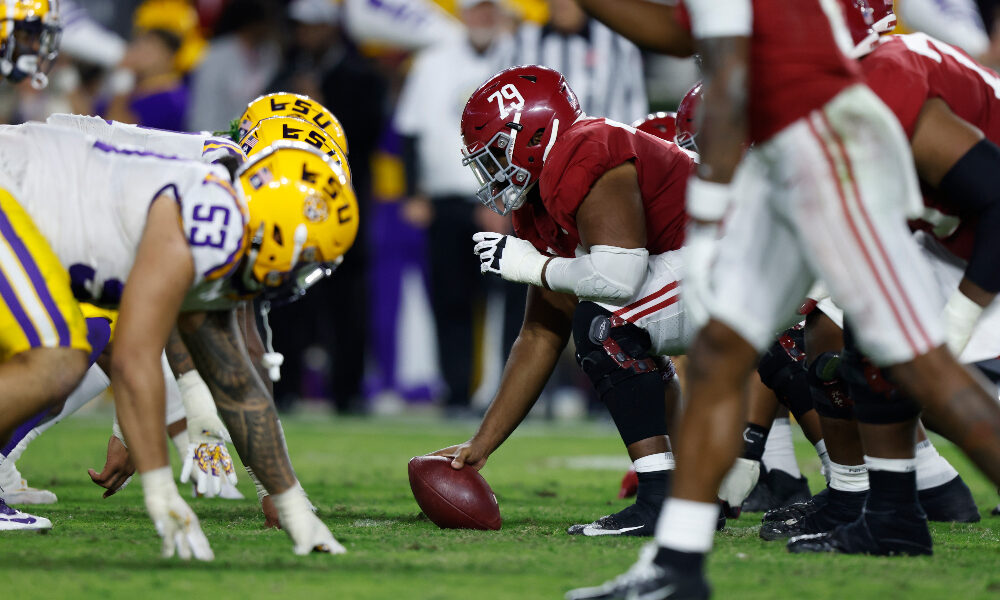 If the alarms weren’t sounding for the previous eight games, they sure are now.

To put it kindly, the performance of Alabama’s offensive line against LSU on Saturday was less than satisfactory. After having two weeks to prepare for a Tigers defense that was without seven players, the Crimson Tide’s front five looked rusty and all-around unprepared to block its opponent.

“We didn’t block them up front really well,” head coach Nick Saban said after the game. “We didn’t run the ball very well on offense. We couldn’t run it at the end of the game when we needed to. We weren’t as effective on third down. We had some protection issues.”

Converting on third down was something Saban and the offense held its hat on the past several games. Two weeks ago against Tennessee, Alabama converted on 15-of-20 third downs; against the Tigers, the offense was just 4-of-13.

Protecting quarterback Bryce Young was a major issue throughout the game as he was sacked four times, hit two extra times while also being hurried on an additional two plays. Part of the problem of protecting Young was due to starting center Darrian Dalcourt leaving the game with an ankle sprain after the opening drive of the game.

Dalcourt was replaced by starting right tackle Chris Owens and Alabama brought in Damieon George to step in for Owens. Now with two players at different positions, any sort of continuity that was built over the course of the season was now affected for the worse.

Young was able to muster a 300-yard day through the air but did not receive any help on the ground.

The struggles from a pass protection standpoint were trumped by Alabama’s worst rushing performance since 1990 as it tallied just six yards all night with an average of 0.2 yards per carry.

These sorts of struggles are less than ideal especially when considering it’s the time of year Alabama needs to be playing its best football.

With three games to go in the regular season, the Crimson Tide needs to get things together on the offensive line if it wants to get past an Auburn defense on the road which ranks third in yards allowed in the SEC.

Should Alabama get past its rival, it will be rewarded with an SEC Championship showdown against Georgia who is unquestionably the best defensive team and likely the best overall team in college football.