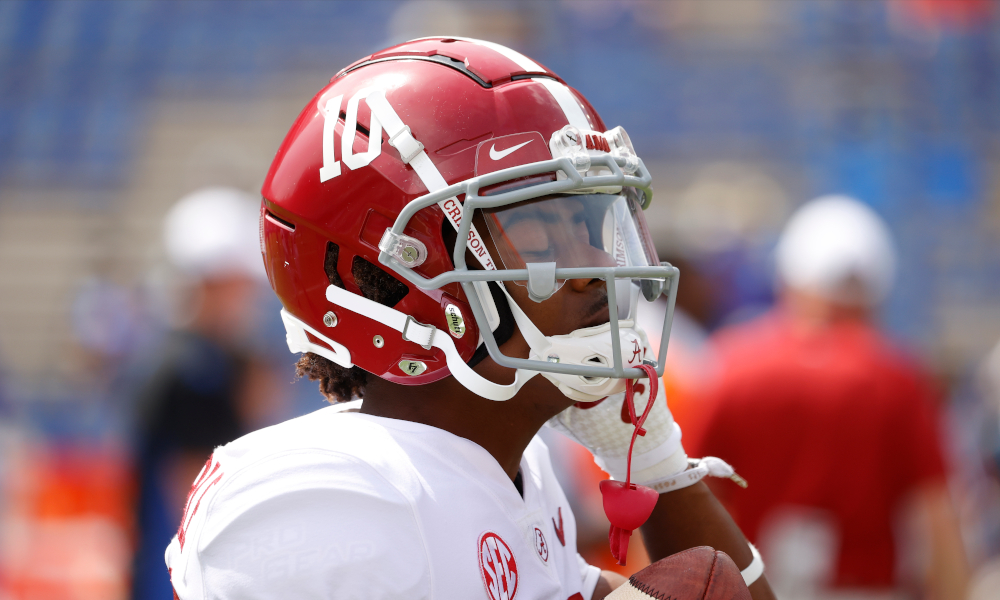 It took Alabama’s offense nearly 11 minutes to get going, but once it got Jameson Williams involved it was smooth sailing in the first half against New Mexico State.

On a true fall weathered Saturday afternoon, the Crimson Tide were airing it out against the 1-8 Aggies as quarterback Bryce Young was carving up the defense with poise and efficiency. Young has a 100 percent completion percentage until the 7:34 mark in the second quarter. Up until that point Young was 13-for-13 for 183 yards and three touchdowns.

He was also the first player in Alabama history to complete his first 13 passes of the game.

Young took the top off the defense twice early on in the first half as he and Williams connected on 50-yard and 32 yard touchdown scores in the opening two quarters. Head coach Nick Saban and offensive coordinator Bill O’Brien have been working to create more explosive plays in the offense and Williams’ speed has been a big factor in its creation.

Alabama also had two new started on the offensive line in Damieon George and Tommy Brown who both had to be inserted into the starting lineup with Javion Cohen and Darrian Dalcourt out for the game. Offensive tackles Chris Owens was once again moved inside to play center. The line held up well against the Aggies front protecting Young and opening up large holes for running back Brian Robinson who broke through for a 63-yard score in the second quarter.

The Crimson Tide did suffer a major injury in the first half as freshman wide receiver JoJo Earle left the game after being tackled awkwardly on a punt return in the first quarter. Earle would eventually be carted to the locker room and not return to the game.

Defensively, Alabama’s unit was stout again, stopping a tricky New Mexico State passing attack. The Crimson Tide put consistent pressure on quarterback Jonah Johnson thanks to the likes of Will Anderson, Dallas Turner, Henry To’oTo’o and LaBryan Ray who recorded his first sack of the season. Pete Golding’s unit also held the Aggies to just 101 yards in the first half.

Alabama goes to the half leading 49-3 over New Mexico State.