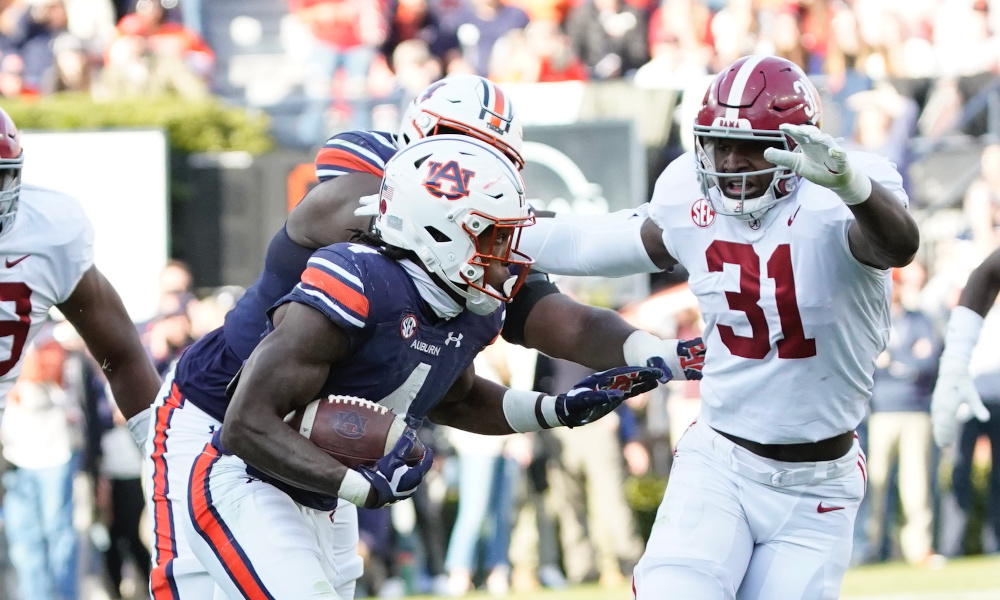 Alabama and Georgia know each other well, and both played against each other six times during Nick Saban’s tenure in Tuscaloosa.

Saban got the better of Georgia in the 2012 and 2018 SEC Championship matchups.

RELATED: Will Anderson selected as SEC co-defensive player of the week

He has defeated Kirby Smart three times, including in 2020.

Both programs recruit the same caliber of athletes. Coach Saban raved about Georgia’s Jordan Davis in Sunday’s SEC Coaches Teleconference. He spoke about the dominance the senior has on the defensive line.

Will Anderson, a sophomore linebacker for Alabama, was a recruit on Smart’s radar in 2020. A native of Hampton, Ga., the five-star signed with Saban over Smart.

Anderson has produced a monster season.

Anderson is the closest thing to Alabama’s legendary pass rusher in a long time. He also leads the nation in tackles for loss (29.5) on an average of nearly three (2.46) per game.

Anderson is a five-time winner of SEC Defensive Player of the Week. His latest honor came after his Iron Bowl performance versus Auburn. He totaled seven tackles, three tackles for loss, and one sack.

Despite knowing how good he is, offensive minds cannot stop him from disrupting plays.

Smart coached at Alabama from 2007 to 2015. He served as a defensive backs coach and defensive coordinator. Smart won the Broyles Award in 2009, signifying him as the nation’s top assistant coach. He tutored many linebackers at Alabama, but Smart compared Anderson to one of the Crimson Tide’s most disruptive players.

“He’s a tremendous athlete,” Smart said of Anderson. “He plays with so much passion and toughness and energy. When he plays, it reminds me of Rashaan Evans before he moved to inside ‘backer.”

Rashaan Evans, a five-star in Alabama’s 2014 class, was a nightmare for offensive linemen. He recorded 23.5 tackles for loss, 15 sacks, and 19 quarterback hurries across his four-year career. Evans helped the Tide to a pair of national championships in 2015 and 2017. He shared the lead for tackles (74) and carried a team-high in tackles for loss (13) with six sacks during the 2017 season.

Georgia’s offensive line will have a lot on its hands.

Stetson Bennett will have to know where No. 31 is at all times.