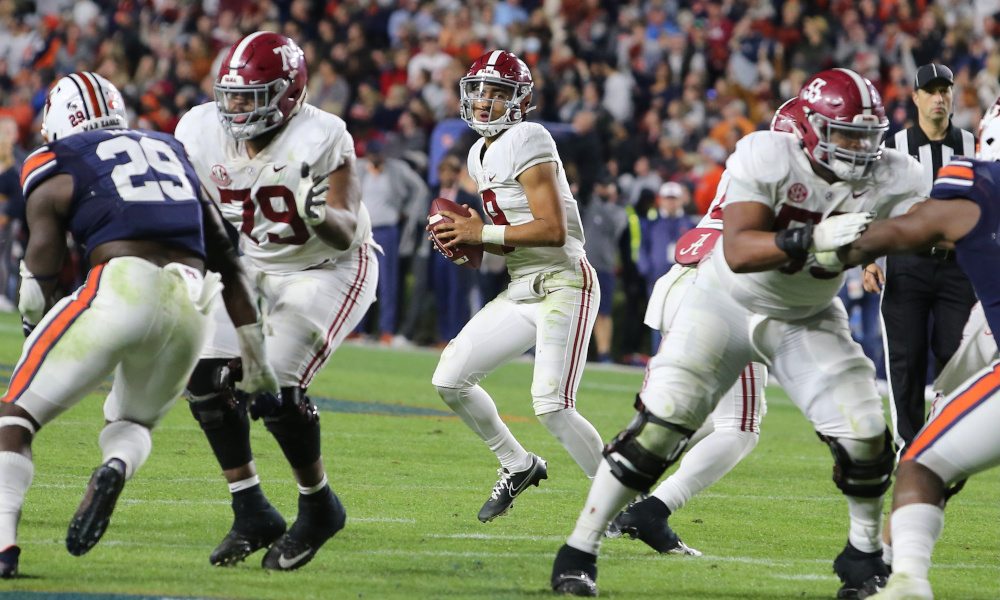 People want to see if he can take down Georgia in the Southeastern Conference Championship Game, but Bryce Young’s Heisman moment came in the Iron Bowl against Auburn.

Sometimes, the best situations come under pressure. Young had his worst completion rating of the season and got sacked seven times.

The Tigers were rocking at Jordan-Hare Stadium and everything that could go wrong happened to Alabama’s offense.

Auburn held a 10-3 lead in the fourth quarter with 1:27 left in regulation.

The Crimson Tide had no timeouts and the ball on its 3-yard line. Ninety-seven yards separated Alabama’s College Football Playoff hopes and Young’s opportunity at the Heisman Trophy.

The Tide witnessed incredible moments from Kenneth Stabler, Mike Shula, Greg McElroy, and Blake Sims versus Auburn. Young showed fans in 12 plays why he was a five-star athlete from Mater Dei High School in the 2020 class.

He emerged in connecting with John Metchie, Ja’Corey Brooks, and Jahleel Billingsley.

The sophomore quarterback found Brooks (freshman) for a 28-yard touchdown with 24 seconds left in the game.

Young quieted a hostile Auburn crowd like Stabler, Shula, McElroy, Sims, and others.

He hooked up with Slade Bolden for a touchdown in the first overtime and completed a pass to John Metchie for a 24-22 victory.

Despite the ups and downs, he never lost confidence.

He had Alabama’s offense, and his teammates had him. Young’s eighth 300-yard passing game and twelfth contest with multiple touchdown tosses came with adversity. He proved to the college football world he could deliver the Tide to a comeback win in a rivalry matchup.

After the game, Metchie had the highest form of praise for his leader.

The junior wide receiver said the two-point conversion that won the game was about Young.

“9 [Bryce Young] just gave me a route, and I ran the route he called,” Metchie said. “It all goes to the quarterback. I’m just following the general.”

Will Anderson, a sophomore linebacker, came in the same freshman class as Young.

He hugged his quarterback after the two-point play and celebrated with him. Nick Saban, after an emotional game, spoke to reporters about Young. According to Saban, the team believes in its signal-caller.

“It was not Bryce’s fault that he struggled in the first half,” Saban said. “We did not give him a chance, but he’s got a lot of mental toughness. He’s got a lot of grit about him. He’s quiet in his demeanor and how he goes about things, but he kept telling the offense, ‘We’re going to get this right. We are going to be okay.’ He played outstanding in the second half.”

Regardless of his Iron Bowl numbers, he remains in the top-10 for quarterbacks nationally in passing yards (sixth), touchdowns (tied for second), passer rating (177, fourth), and total quarterback rating (86.7, fourth).

Ohio State loss to Michigan in its rivalry game, so Young can capture the Heisman with a dominant outing versus Georgia in Atlanta.