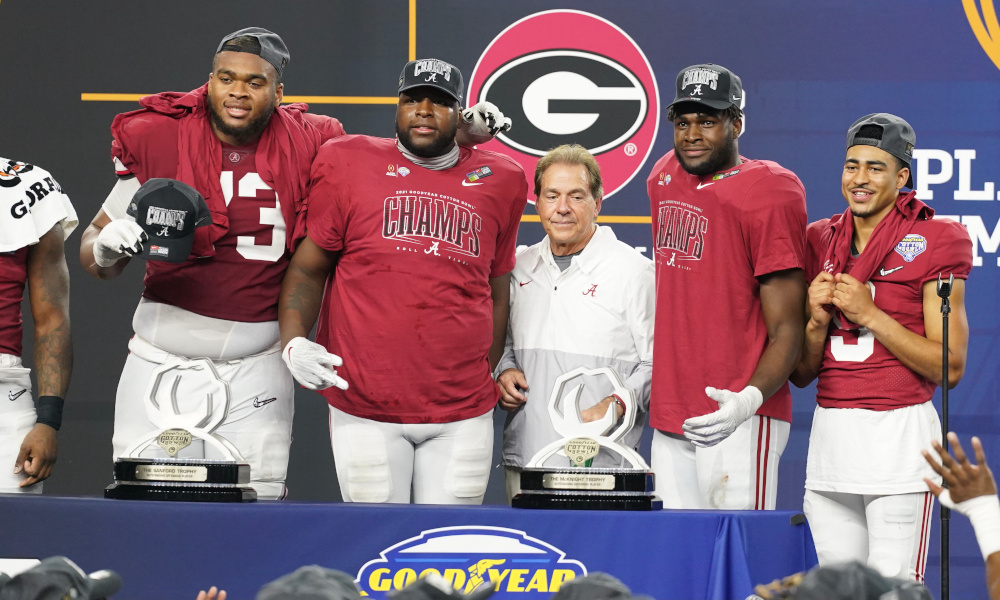 Alabama football has carried importance since Wallace Wade coached it to three national championships in 1925, 1926, and 1930.

Frank Thomas continued the success with championships in 1934 and 1941 before Paul “Bear” Bryant lifted the University of Alabama to national prominence. Bryant’s era brought magic in the 1960s and 1970s, as the Crimson Tide won six national championships. Eugene “Gene” Stallings added another trophy to the case in 1992, but the “Roll Tide” mantra became difficult after him. Alabama would endure 15 years without a national title from 1993 to 2008.

RELATED: Nick Saban hopeful to get back injured players ahead of national title vs Georgia

Stallings left the program after the 1996 season, and turmoil set in.

Tide fans continued yelling their slogan, but it felt like it had no effect. Mike DuBose won a Southeastern Conference Championship in 1999, but his four years did not yield a national championship. DuBose suffered not having 30 scholarships because of NCAA violations from the Stallings era. Off-field issues would also plague DuBose. He had an extra-marital affair that affected him greatly, and he could not deliver on high expectations Alabama had in 2000.

The Crimson Tide went 3-8 that season and a recruiting violation led to DuBose’s firing. Dennis Franchione and Mike Shula suffered because of DuBose’s decisions.

Alabama lost 21 scholarships over three years, had a two-year bowl ban, and got hit with five years of probation. Alabama could not recruit talent. The Tide had losing seasons, a coaching carousel, a fallen culture in Tuscaloosa, and people wondered would Alabama football get restored to the greatness of Wade, Thomas, Bryant, and Stallings.

Fans wanted “Roll Tide” to mean something again. It was not just for them, but the athletes and the program as a whole.

He played for Coach Bryant and won a national championship in 1961. Moore coached with Bryant for 18 years (1964-82) and helped him secure five national championships. He witnessed the peaks of Crimson Tide football and the valleys. As an athletic director, Moore knew Alabama needed a winner. He pulled one in Nick Saban. When he landed in Tuscaloosa fifteen years ago, a young Saban saw an energetic crowd that was hungry for a champion. He saw people and a city that wanted to be relevant again.

Saban saw the vision Moore painted to him, and it convinced him that Alabama was for him.

Moore allowed Saban to be himself, and he trusted Saban to run the program.

15 years ago today, Nick Saban arrived to Tuscaloosa and made an immediate impact on the city, state, and The University of Alabama as a whole.

His hair was immaculate as well.

He brought a winning culture, a fresh mindset, a championship mentality, a father figure, and restored vigor to a fan base that wanted to brag again on its football team. Saban ushered a new meaning to the word “dominance.” It took him two years to put Tide football back in the mouths of national pundits and three years to re-establish Alabama as the best program in the sport.

After his first No. 1 recruiting class in 2008, Saban has stacked the Crimson Tide with unbelievable talent each year.

He’s brought the Tide six national championships, tying him with Coach Bryant for most at the program. Saban has turned young men into multimillionaires by placing 100+ athletes in the NFL Draft. He’s produced four Heisman Trophy winners, including a Heisman quarterback (Bryce Young). Saban has coached several All-Americans and has changed the landscape of college football.

His success brought changes in recruiting, an NCAA transfer portal, the College Football Playoff, and many other things. He has endured obstacles, including a hip replacement and COVID-19, but he remains with having Alabama on top.

The Tide was a shell of its former self before Saban. Now, it is the gold standard of sports.

Alabama fans are forever grateful that Saban chose them.