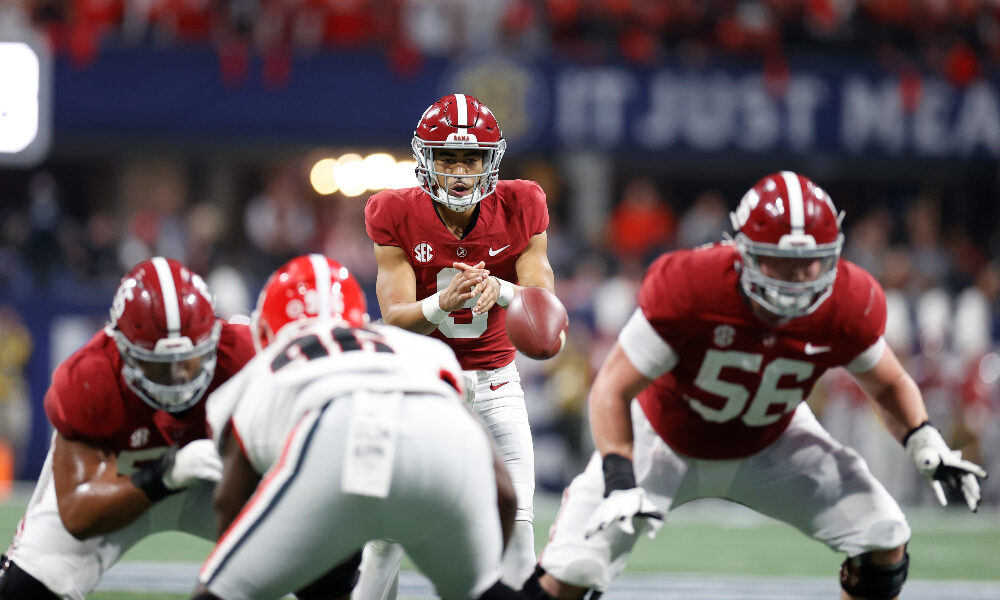 Alabama football and the Georgia Bulldogs will battle it out on the gridiron for the second time this season in the CFP National Championship game Monday.

The kickoff is set for 7 p.m. CST. The game will be broadcast live on ESPN.

Key Insight: “The game will be closer than the SEC Championship Game, but Alabama will pull away in the second half. Bryce Young will attack the Bulldogs secondary with screens, post patterns, and different routes. A healthy Brian Robinson plays a bigger role, and Ja’Corey Brooks has a monster game. Defensively, the Crimson Tide frustrates Stetson Bennett again. Georgia will have some success in the run game, but the Tide will find a way to limit Brock Bowers.”

Key Insight: “This one should be a dog fight until the end, but the path to victory remains the same for both teams. Alabama’s defense will have to force Stetson Bennett to beat them by pressuring him and forcing him to make the difficult throws. Georgia’s defense will have to find a way to put pressure on Bryce Young and make him uncomfortable. This game will go back and forth, but the Crimson Tide’s battle-tested offense should come up big in the fourth quarter.”

Key Insight: “The unquestioned best two teams in the nation will face off one last time this season. But a bit has changed since the SEC Championship, namely Alabama’s laundry list of injuries coming into the game. Not having John Metchie will be a significant blow for Bryce Young and the offense as he was consistently relied upon as a safety blanket. The Crimson Tide’s offensive line also has two key injuries to the right side as Emil Ekiyor and Chris Owens have been limited all week. Every sign since the two last played, especially Georgia’s trouncing of Michigan points to the Bulldogs capturing its first national championship since 1980. But one sideline has Nick Saban and one doesn’t. I’ll leave it at that.”