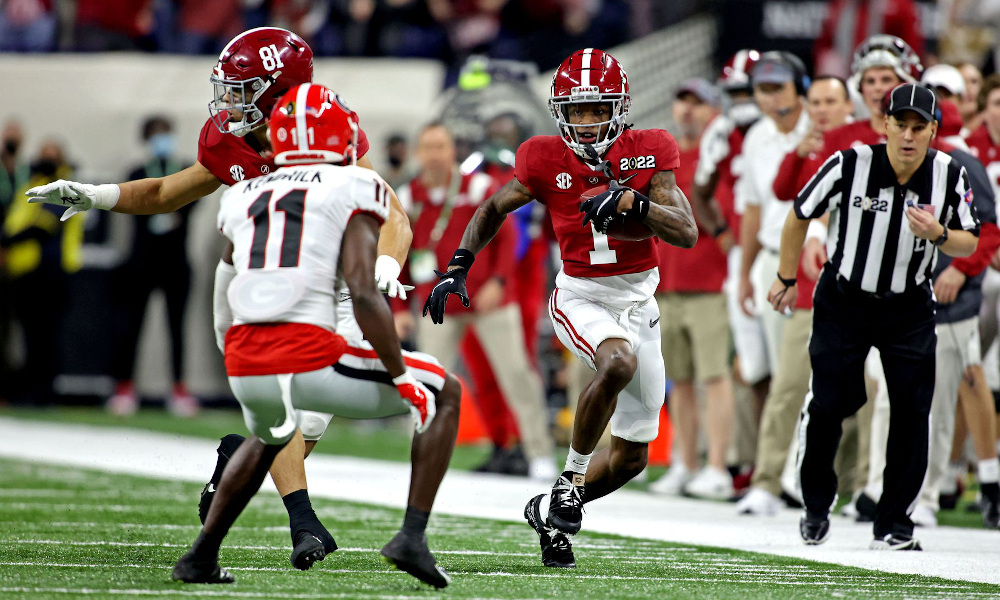 The prayers from Alabama nation pulled through for Jameson Williams.

Crimson Tide fans cried on Monday night when Williams suffered a knee injury during the first half of the College Football Playoff National Championship Game. He walked into the locker room on his own and wanted to return, but Alabama’s coaching staff kept him on the sideline. Williams watched his team take an 18-33 loss to Georgia in his final collegiate game.

RELATED: Eli Ricks is excited to get to work with Alabama after CFP title game loss

People were concerned about his potential career in the National Football League, but ESPN’s Adam Schefter put those fears to rest. According to doctors, Williams will retain his impressive 4.30-40 speed after surgery within the next ten days.

Alabama’s Jameson Williams, the projected top WR in the 2022 NFL Draft, tore his ACL last night vs. Georgia, per sources. Doctors believe that, after surgery within the next 10 days, Williams will retain his sub 4.3 speed, and they expect a full recovery.

He’s expected to make a full recovery, and Tide fans will be excited to watch him in the pros.

Williams served as a blessing for Alabama’s offense from the NCAA transfer portal.

He and Bryce Young formed an incredible connection, and the transfer from Ohio State helped the sophomore become the first Tide quarterback to win the Heisman Trophy. The 6-foot-2, 189-pounder caught 79 passes for 1,572 yards and 15 touchdowns. Williams leads Alabama’s receivers in yards, scores, yards per catch (19.9), and yards per game (104.8). He earned first-team All-SEC and SEC Co-Special Teams Player of the Year honors. Williams collected first-team All-American honors from the Associated Press and Sporting News. He totaled seven 100-yard performances, including four games with 150+ receiving yards.

Williams had a profound impact on Alabama’s single-season record book.

He ranks fifth all-time for receptions, third for receiving yards, and third for touchdowns. Williams will be an early first-round draft selection for April. Alabama fans appreciate him for what he gave the program in 2021.