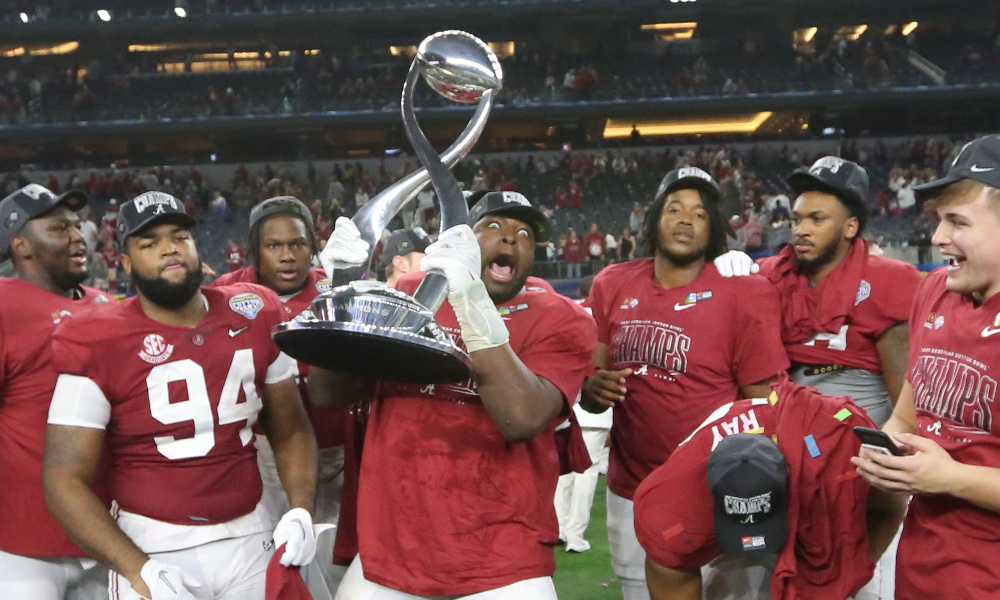 Alabama football is in the College Football Playoff National Championship Game for the sixth time since the venue started in 2014.

Nick Saban and the Crimson Tide dominated Cincinnati in the Goodyear Cotton Bowl.

RELATED: Brian Branch has stepped up in a major way and has elevated Alabama’s defense

Alabama earned a 27-6 victory over the Bearcats at AT&T Stadium, punching its ticket for Saban’s opportunity to win his eighth national title. The Tide will rematch Georgia on Monday, Jan. 10, for the CFP title showdown.

Alabama defeated the Bulldogs on Dec. 4, 2020, in the SEC Championship Game.

Saban is 7-1 all-time against Georgia as Alabama’s head coach — including four wins in championship games.

National media and betting sites are pulling for the Bulldogs.

Before the game, the grades from Alabama’s performance versus Cincinnati are below.

It can win with Bryce Young orchestrating shootouts, or it can pound teams into submission behind its offensive line, and Brian Robinson Jr. Cincinnati solely focused on receiver Jameson Williams and Robinson recorded a career-high rushing performance.

Bill O’Brien had some questionable play calls, but he showed patience in the run game.

Robinson posted the most rushing yards (204) by any Crimson Tide running back in a bowl matchup.

He averaged 7.8 yards per rushing attempt, including a long run of 23 yards. Young did not toss for 300 yards, but he did not need to. He recorded three touchdowns, including a 44-yard bomb to freshman Ja’Corey Brooks. Alabama had Brooks, Slade Bolden, and Cameron Latu step up last week in John Metchie’s absence.

The Crimson Tide totaled 482 yards, including 301 yards rushing. It averaged 6.4 yards per play on 75 plays. Alabama did not have to be explosive, but it controlled the pace of play.

Pete Golding had Tide fans very proud of him in the CFP Semifinal Game.

He called a masterful defensive performance versus the Bearcats.

RELATED: Alabama opens as an underdog to Georgia in CFP National Championship

Cincinnati had one of the top offenses in college football, but Alabama rendered it helpless.

The Tide forced three turnovers on downs and held the Bearcats to two conversions on 12 third-down attempts.

Cincinnati did not score a touchdown and totaled 218 yards.

Alabama limited Cincinnati to 58 plays on an average of 3.8 yards per play. Golding and the Tide suffocated the Bearcats.

Alabama’s special teams did not cost it the game, but it needs to be better versus Georgia.

JoJo Earle, a freshman receiver, fumbled a punt. Kool-Aid McKinstry recovered the ball for Alabama, but the situation could have been worse. The Crimson Tide did not craft good returns against Cincinnati’s coverage team.

Will Reichard missed a 44-yard field goal, but he did respond by making two kicks. James Burnip averaged 44 yards per punt (two punts, 88 yards) for his attempts.

Alabama was not awful on special teams, but it could have made more plays.

Alabama had a great game plan for the Bearcats.

Coach Saban and his staff were patient on offense and defense.

The Tide took what Cincinnati gave in the passing game, but its rushing attack set the tone.

Defensively, Golding showed patience in his play-calling and had success. Cincinnati was not comfortable on offense. Special teams had two hiccups, and O’Brien made some head-scratching calls, but Alabama accomplished what it wanted at AT&T Stadium. The coaching staff saw several players step up and showcase their skills. Alabama wanted to be physical, and the coaches made it happen.