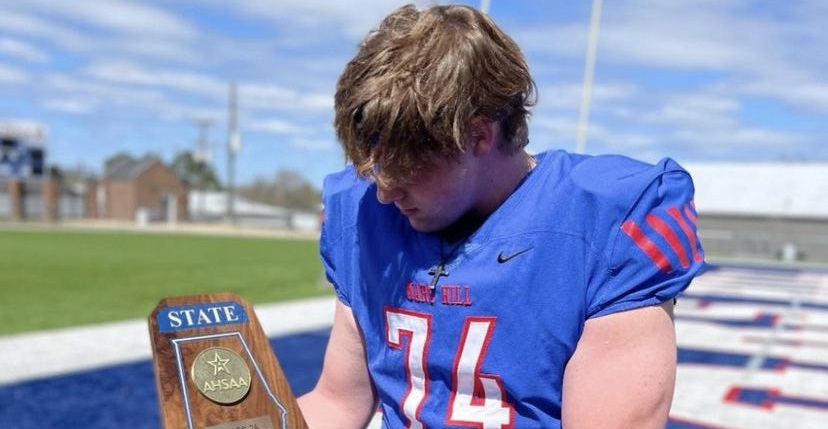 Keenum has come a long way since the first time Touchdown Alabama caught up with him last February. The Mars Hill Bible product has gone from having no offers and very little college interest to having 15 D1 offers, including an offer from Notre Dame. He is also receiving interest from some of college football’s blue bloods.

RELATED: Koby Keenum looks to be next elite OL out of Alabama.

The junior said he feels everything has been a bit of a surprise.

“It has been crazy,” Keenum said. “I was not expecting any of this to happen so soon. Once it blew up, it kind of took off. A lot has happened. It has just been really exciting for me and my family.”

Alabama, Clemson and Texas are among the top programs just showing interest in Keenum at the moment. The Crimson Tide hosted him for gameday visits a couple of times this season and have been communicating with him a lot lately.

“There has been a lot of contact,” said Keenum. “I have been talking with their defensive line coach, Freddie Roach and their director of recruiting. They have said they are very interested in me and want to get me down for a junior day. I suppose to be back down there later this month. We have been talking a lot here recently, and it has been fun. I am interested in seeing what the next step is. Their coaches are just outstanding. It has really been cool meeting them. The atmosphere was always crazy when I visited during the season, and they have some of the nicest facilities in the country.”

Keenum helped pave the way for a dangerous Mars Hill Bible run attack during the 2021 football season. The 6-foot-4 300-pounder spent a lot of time at the tackle position during his junior season and open up several holes with his ability to keep his feet moving and play through the whistle. He also displayed his impressive mobility by pulling and lead blocking for backs with great efficiency.

The D1 prospect saw himself blocking linebackers a lot because he was able to get to the second level, which is something he wants to get better at.

“I want to continue to try to get there faster,” Keenum said. “I want to really get my hand placement and technique perfect.  All these coaches want you to have technique. Technique is the most important thing to me, and I am going to try to get that down. I can always improve on a lot of things.”

Alabama has not offered Keenum yet, but that could change in the near future.

Justin Smith is a Scouting/Recruiting analyst for Touchdown Alabama Magazine. You can follow him on Twitter, via @Jdsmith31Smit