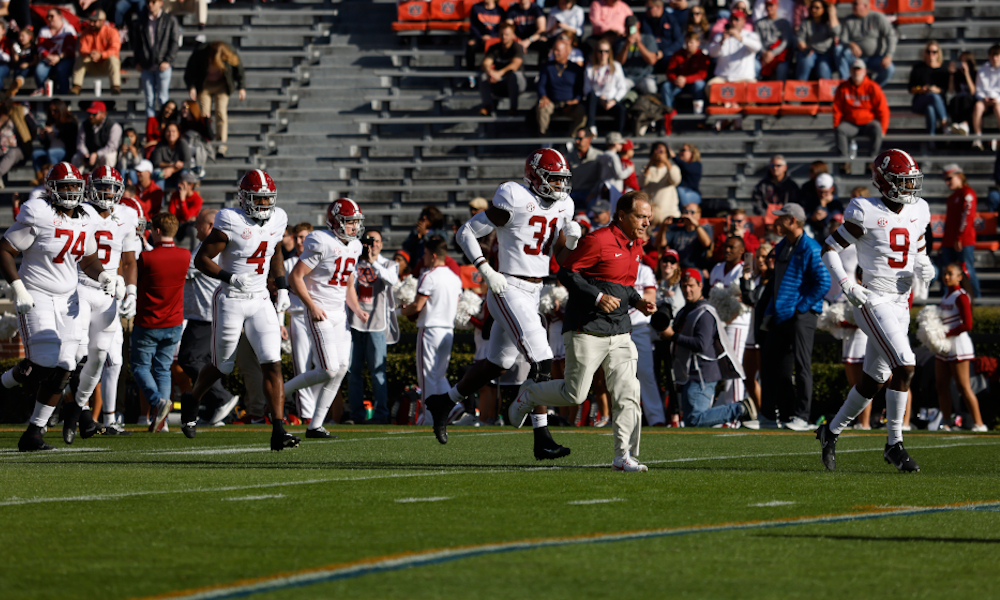 Diversity and equal opportunities have become a talking point in professional sports.

The National Basketball Association embraces women in the coaching ranks, and Brian Flores has put pressure on the National Football League to have more black men in head coaching positions. The University of Alabama has come a long way with integrating African Americans, having black players in leadership positions in football, and getting black assistant coaches on staff. However, one thing remains for Nick Saban to change.

He made headlines in the summer of 2020 as he marched with his players for social justice.

Coach Saban took a lot of heat for it, but he wanted to show the team that he was in sync with the cause, and the athletes loved him for it. In fifteen seasons with the Crimson Tide, Saban has had one primary black coordinator on staff. He’s had several position coaches – including Burton Burns, Bo Davis, Mel Tucker, Derrick Ansley, Karl Scott, Karl Dunbar, Brian Baker, Charles Huff, Holman Wiggins, Jay Valai, and Robert Gillespie – but one primary coordinator. Ron Middleton (2007) and Bobby Williams (2008-15) coordinated special teams under Saban at Alabama, but that position is not a top job on a national scale.

He had the offense executing at a high level, averaging 45.6 points per game.

Locksley brought in “joyless murderball,” where the Tide scored on opponents at will. Alabama totaled at least 40 points in ten of 15 games in 2018. Locksley’s run-pass option (RPO) style made Tua Tagovailoa nearly impossible to stop at quarterback. He set single-season school records for passing yards (3,966), touchdown passes (43), and total scores (48). Tagovailoa won several individual awards and was a finalist for the Heisman Trophy. Locksley’s offense produced three 500+ yard rushers and helped Josh Jacobs become a first-round pick in the 2019 NFL Draft. Locksley coached Jerry Jeudy to the Biletnikoff Award as he recorded 1,315 receiving yards and 14 scores on 68 catches. He mentored Jaylen Waddle to SEC Freshman of the Year and had four receivers in a position to catch 40+ passes from Tagovailoa.

It is time for Saban to have another black coordinator on his staff. Players respond better to coaches that look like them, talk like them, and relate to them. Burton Burns coached running backs for 11 years (2007-17) in Tuscaloosa.  He popped out a 1,000-yard rusher in eight seasons because he could relate to the players. Burns spoke their language and got the most out of them.

Mel Tucker started the improvement of Alabama’s secondary. Before him, opposing quarterbacks relished attacking the defensive backs. Tucker instituted a “No Fly Zone” scheme, and the Tide became dominant. He moved Eddie Jackson from cornerback to safety in 2015, and Jackson trusted him. Jackson collected a team-high six interceptions, including two returned for touchdowns.

Tucker mentored Minkah Fitzpatrick into a Freshman All-American as he had two picks that year and returned both for scores.

Tucker transformed the Crimson Tide’s secondary from liability to strength in winning a College Football Playoff national title in 2015. Derrick Ansley (2016-17) and Karl Scott (2018-20) continued Tucker’s blueprint. The players took to their words and actions. Alabama’s secondary accounted for at least 70 percent of interceptions during their tenures.

He had Jameson Williams (1,572) and John Metchie (1,142) over the 1,000-yard mark in 2021. Wiggins placed Jeudy, Smith, Jaylen Waddle, and Henry Ruggs III in the first round of the NFL Draft. Williams could be the next first-rounder in Wiggins’ hat.

Make no mistake about it, Saban has done a remarkable job picking coaches, and his seven national championships clearly illustrate that. But this is deeper and more important than that.

Saban is missing the touch of having a black primary coordinator. It worked with Locksley as Alabama won an SEC Championship and advanced into the CFP National Championship Game.

Saban literally walked the walk when he marched with the players. Now, it’s time he walks a different walk that empowers men that look like 90 percent of his two-deep depth chart.

It is time for more black primary coordinators to have an opportunity at Alabama — which will afford them opportunities to be a head coach someday.