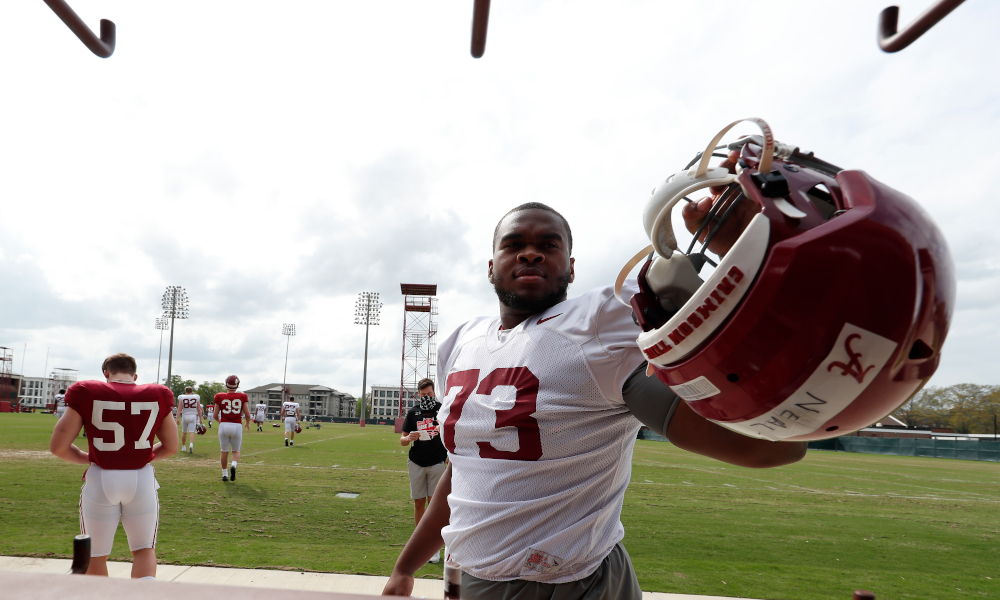 Evan Neal is the first one we look at.

-Weaknesses: None that are glaring

Evan Neal is the safest pick in the NFL Draft after Aiden Hutchinson of Michigan. Neal was a linchpin anchor on the Crimson Tide’s offensive line for three years, including two seasons at tackle.

The 6-foot-7, 335-pounder allowed just two sacks in 2021 and 3.5 sacks in two years as a tackle. Neal brings an imposing presence as an anchor, but he has the quickness to reset and establish position to neutralize edge rushers. He set up Mac Jones (2020) and Bryce Young (2021) as Heisman Trophy finalists. Neal assisted Young to winning the honor last season. As a run blocker, Neal mashed defenders and drives them out of plays.

The Jacksonville Jaguars have the No. 1 overall pick in the draft. Most draft pundits have them taking Hutchinson, but Neal would be a better move to protect Trevor Lawrence. Cam Robinson is back on a franchise tag at left tackle. If it takes Neal as a right tackle, Lawrence’s development in year two takes a jump.

The Houston Texans have the third overall pick.

Davis Mills, a former Stanford standout, showed promise as a rookie quarterback in 2021. Houston’s offensive line can use a tackle, and Neal would help with Mills’ growth and the development of the rushing attack. The AFC South is an intriguing division, but if Mills takes off it is big for Houston.

Neal’s size, length, and leadership would work in Houston.

The New York Giants have two picks in the top-10.

New York has Nos. 5 and 7 overall. Daniel Jones can be a productive quarterback, but the Giants have had issues with its offensive line. Neal would bring stability to the Giants as a left or right tackle. He carries versatility as a guard, but will play tackle.

It will be interesting to see who takes Neal.