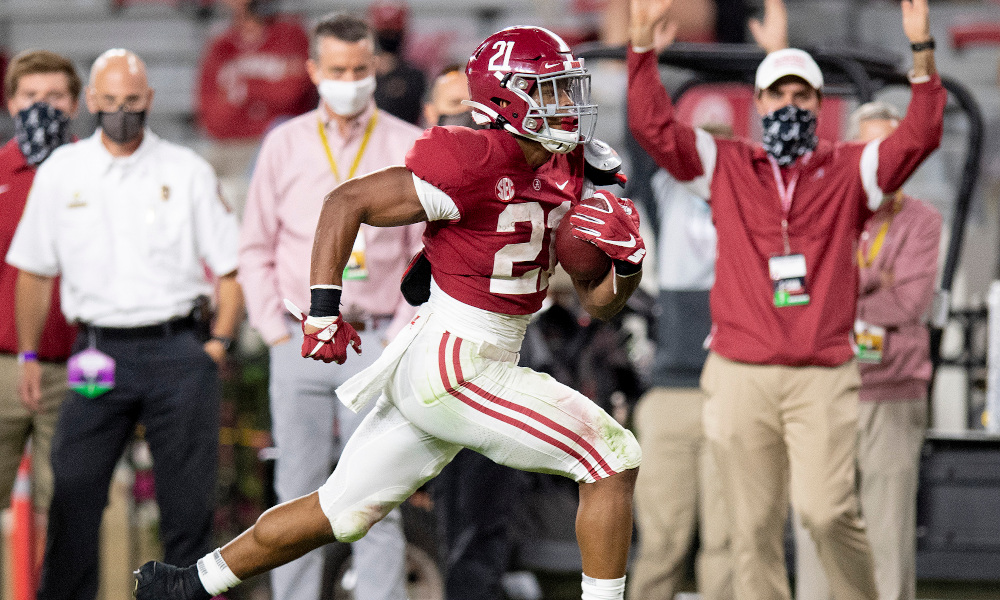 Alabama fans are excited to have Jahmyr Gibbs, and they are looking forward to having Trey Sanders and Roydell Williams back.

The Crimson Tide has a stacked running back room, but the addition of Gibbs caused some to forget about Jase McClellan.

The junior from Texas served as an all-purpose running back in 2021, totaling five touchdowns in five games before suffering a knee injury versus Ole Miss.

McClellan carried some Kenyan Drake and Josh Jacobs in his role, recording a rushing touchdown, three receiving scores, and a blocked punt returned for a touchdown. He set a school record in a victory over Mercer — becoming the first player since 2013 to account for a touchdown in three different ways. McClellan rushed for a score, caught a 21-yard touchdown, and returned a blocked punt to the end zone inside Bryant-Denny Stadium.  The 5-foot-11, 212-pounder gave Bryce Young a weapon out the backfield, and his injury was a pivotal loss for the Alabama offense. McClellan performed non-contact drills in spring practice, but he’s looking like his old self. He is training with Brad Lester, former Auburn running back and founder of The Speed Genius in Atlanta, Ga. Lester has gotten some of the best backs prepared for the next level, including Najee Harris and Alvin Kamara.

He trained Harris in the summer of 2020, and the California native produced a Heisman-caliber season in the fall.

He was a Unanimous All-American, first-team All-SEC selection, SEC Championship Game MVP, and Doak Walker Award winner. As a two-time national champion, Harris got selected at No. 24 overall by the Pittsburgh Steelers in the 2021 NFL Draft.

Harris is elite, but Lester confirmed to Touchdown Alabama Magazine that McClellan is just as good if not better ahead of summer.

“He is really good. He’s back to the old Jase to me,” Lester said. “It’s funny how people forget about you when you get injured, but he is hungry. Jase is just as explosive as Najee, if not more. He has more moves than Najee, he is better out the backfield, and he gets downhill.”

Lester respects the explosiveness of Gibbs, but he sees McClellan bouncing back.

“We are making sure his knee is stronger than last year,” Lester said. “Summer camp starts in two weeks, and we are not trying to overdo it. Alabama has great trainers and doctors, so we are doing light work now. When they tell me we can pick it up more, we will do that.”

McClellan arrived in the 2020 class as a four-star from Aledo High School.

He rushed for 245 yards and two touchdowns on 23 carries in 12 games. If he can show the burst, explosiveness, and versatility of Harris from 2020, the Crimson Tide will have two game-breaking backs.