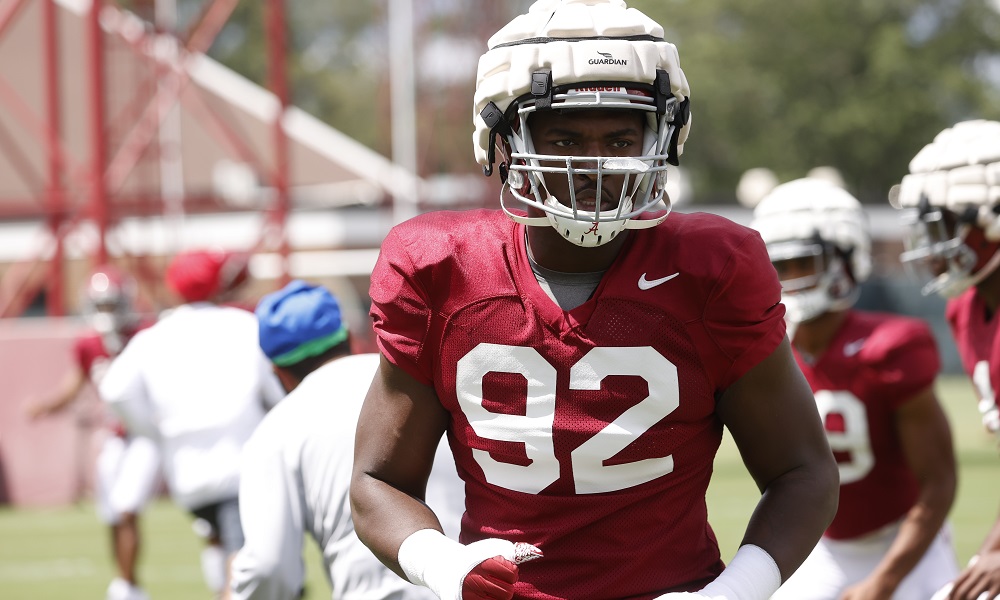 We made it to No. 24 in our Top 30 countdown for Alabama players. Justin Eboigbe checks in here.

–Weaknesses: Consistency, needs more strength as a run stopper, needs to become a force as a pass rusher (2.5 career sacks)

Justin Eboigbe enters his final season at Alabama, but he needs to be impactful.

He came into the Crimson Tide’s 2019 class as a four-star defensive end from Georgia. Eboigbe arrived as one of the best prospects from Georgia, but he has yet to become an explosive player. The 6-foot-5, 292-pounder has not received many opportunities as a starter, but Eboigbe has played in a lot of games. He possesses quickness and knowledge of the defense but needs to be more consistent against the run. Eboigbe has to develop pass rush moves and create chances to sack quarterbacks.

Alabama’s linebackers and defensive backs will have more success if its front plays up to the standard.

Eboigbe has 2.5 sacks in his career, and that is not enough to garner a high draft stock. He has to show up, collapse the pocket, and make it difficult for quarterbacks to complete passes. Eboigbe totaled five quarterback pressures in the last two seasons, but NFL scouts want him to finish with sacks. He is a talented player, but Tide fans want more dominant play from its line.

We will see how Eboigbe stuffs the run and affects quarterbacks in the fall. Phidarian Mathis took a huge jump in 2021 and became a second-round draft pick. Eboigbe can do the same, but it starts with him taking control up front.