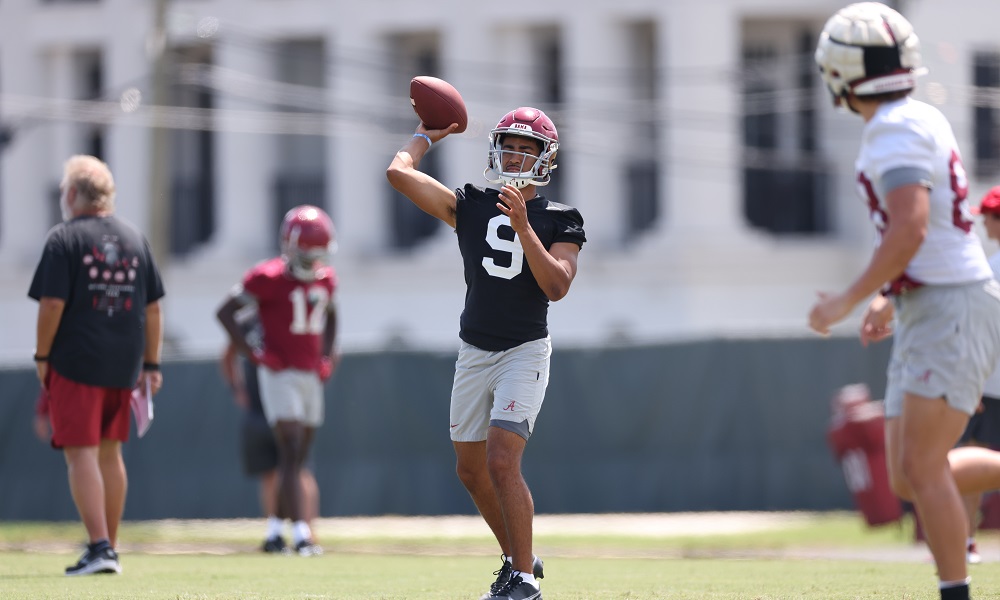 As we prepare for the start of Alabama’s 2022 season, the staff for Touchdown Alabama Magazine will be previewing position groups in preseason camp.

The Crimson Tide returns veterans, young players, and depth at every position.

Alabama’s focus is to return to the College Football Playoff and win a national championship. Coach Nick Saban is pursuing the eighth national title of his career and seventh for the Tide. He wants to see excellence on both sides of the ball, and the season begins on Saturday, Sept. 3.

Alabama football has an exciting quarterback room for the first time since 2017 and 2018.

RELATED: Jaylen Moody is holding serve, but Alabama is developing more inside linebackers

All three helped the Crimson Tide to national championships. Tagovailoa and Jones became Heisman Trophy finalists, and Jones won a CFP National Championship from start to finish as the quarterback in 2020. Tide fans see the room of Bryce Young, Jalen Milroe, and Ty Simpson and wonder how great can this group be. Young returns as a Southeastern Conference Champion, single-season school record holder, Heisman Trophy winner, and an All-American. He has many strengths but accuracy, ball placement, and mobility are the main ones. Young has increased in leadership, but Alabama does not want him taking many sacks in the fall.

He has accomplished a lot in his career, but the former five-star wants to add a national title.

Milroe is back with a year under his belt in the system. He arrived as a four-star in the 2021 class from Texas.

Milroe is an impressive, athletic specimen. He has the body structure of a Deshaun Watson or Lamar Jackson, but fans want to see how much has he developed in the passing game. Milroe did some good things in the spring, including a 52-yard touchdown pass to wide receiver Christian Leary, but Alabama has to allow him to run the whole offense. He did throw a touchdown to Javon Baker last season in the Crimson Tide’s meeting versus Southern Mississippi. The potential to be a complete quarterback is there, and Alabama does have a package for Milroe, but Tide supporters need to see what the future is like with him.

RELATED: Jermaine Burton explains why he chose Alabama as his transfer school: ‘I want to win with this team.’

Simpson, a five-star freshman, adds much talent to the room.

He led Westview High School in Tennessee to a Class 2A State Championship and earned Gatorade Player of the Year. Simpson tossed 41 touchdowns to three interceptions in his senior season. He enrolled in the spring to get an early start in the Alabama football culture. Simpson made good throws in the A-Day, but he has gotten more confident in the pocket. He trained with QB Country and has increased his arm strength. According to sources, Simpson tossed two touchdowns in last week’s scrimmage.

He has the arm talent, but Simpson has to continue to grow in the playbook.

Overall, Bryce Young is the starter and face of the offense. Hopefully, he remains healthy for the entire season. If something should happen to Young, injury-wise, fans are confident in Milroe and Simpson. It is going to be fun to watch this room grow.