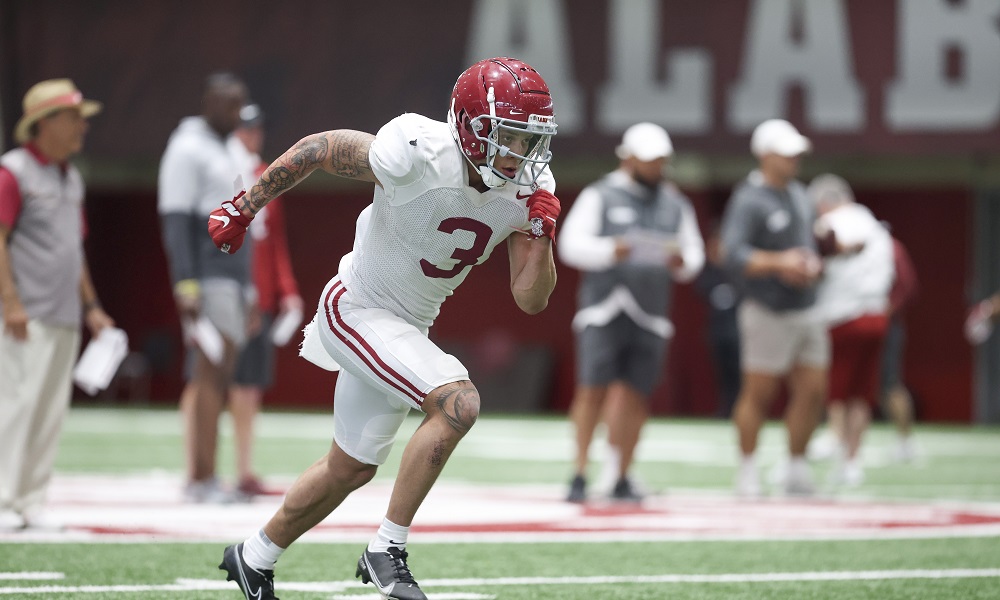 Alabama players put their arms around Jermaine Burton when he chose the Crimson Tide, and fans are showing appreciation after what he said in Monday’s interview.

The Tide handed Georgia its lone loss in the Southeastern Conference Championship Game, but Burton saw the confetti rain in his favor for the CFP. He finished 2021 with 26 catches for 497 yards receiving, and five touchdowns.

Burton shocked some people when he decided to transfer to Tuscaloosa, but it was the best transition for himself and his family. He won a national title over Alabama, but Burton is excited about the brotherhood he has.

RELATED: Alabama’s defense is ‘not shying away from expectations’ this season, per DeMarcco Hellams

He said the players for the Tide ‘welcomed him with open arms.’

“I cannot thank these guys enough for the way they treated me,” Burton said. “Regardless of last year’s game and being on the other side of the ball, I am here now. I think that is what I need to focus on. I need to focus on this team and what we can do this year.”

Coach Nick Saban has called Burton the ‘most consistent’ receiver for Alabama. He takes joy in his performance, but Burton enjoys it more when everyone is on the same page.

“My mindset when I came into this program was to work and understand the offense,” he said. “I wanted to get things down with Bryce and work with a lot of players that came in with me. My focus is on those guys and making sure our bond is together.”

Alabama has had special connections between a quarterback and wide receiver in the Saban era. Blake Sims had it with Amari Cooper in 2014, Jalen Hurts had it with Calvin Ridley in 2016 and 2017, and Mac Jones had it with DeVonta Smith in 2020.

Could Bryce Young have it with Burton in the fall? The 6-foot-2, 200-pounder discussed his relationship with Young.

“My relationship with Bryce is great,” Burton said. “He is a guy that I have known since high school. I did my last two years in California. When I came here, it clicked. We wanted the best for each other. He wanted me to learn the offense as quickly as possible. I am trying to learn about anything I can do, any tips I need to work on for us to be a better receiving corps and quarterback room.”

Burton thought players would harbor feelings from the national title game, but it shocked him how the Tide treated him.

“This team brought me in with unbelievable arms and welcomed me,” he said. “We did not have an issue with the game. I honestly got congratulated more than anything. The guys brought me in and wanted me to work with them. I honestly forgot about that game. I want to win it with this team. Everybody is happy for me. They are happy I’m here, and we are ready to work.”

Burton has a new home in college football and a chance at a second CFP National Championship.

As a starting receiver, he looks to hoist the trophy in California to end the season.