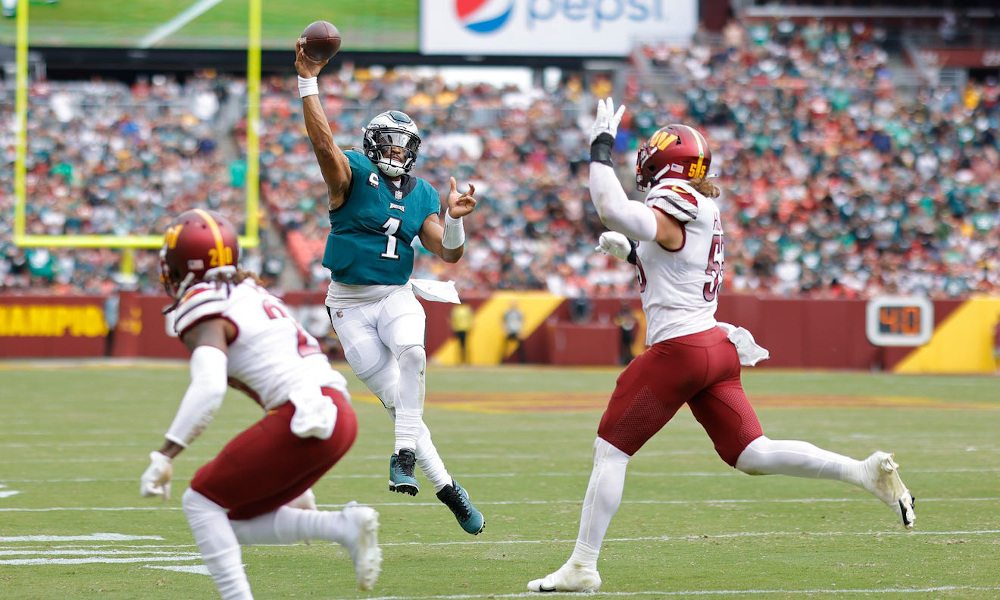 Jalen Hurts and DeVonta Smith have the Eagles soaring at 3-0 on the season.

Hurts set an NFL record for having an 80+ percent completing rating, 300+ passing yards, and two rushing touchdowns in a single game against Minnesota. He turned in back-to-back 300-yard performances with a strong showing in Sunday’s matchup versus the Washington Commanders. Hurts accounted for 340 yards passing and three touchdowns in a 24-8 victory for Philadelphia over Washington. He completed 62.9% of his passes (22-of-35) and totaled a passer rating of 123.5.

Hurts has the Eagles playing with a focus and identity it needs to be successful. Smith, a former Heisman Trophy winner, posted his first 100-yard game of the campaign. He caught eight passes for 169 receiving yards and a touchdown. Smith averaged 21.1 yards per catch, including a long reception of 45 yards. During his rookie season, he brought in 64 catches for 916 yards and five touchdowns. Smith tallied two 100+ yard games in 2021. Hurts and Smith connected at the University of Alabama. Hurts found the Louisiana native for a game-winning touchdown against Mississippi State in 2017 at Davis Wade Stadium in Starkville, Miss.

The two are in their second year together for the Eagles.

Hurts and Smith have the combination to pace Philadelphia to deep playoff runs and potentially a Super Bowl.