How ironic is it that the most coveted position in football is the one that encounters the most scrutiny? In just three years, AJ McCarron has gone from being a questionable game manager to proven SEC quarterback in the eyes of most people.

McCarron’s journey to become a two-time national champion started at St. Paul’s Episcopal High School in Mobile, Ala. Under head coach Mike Bates, McCarron showed that Hoover wasn’t the only city capable of producing outstanding quarterbacks. In his sophomore year, he came out blazing, passing for 1,974 yards, 25 touchdowns and four interceptions. As far as the second-year slump is concerned, McCarron didn’t have it. In his junior year, his productivity increased. McCarron passed for 2,532 yards, 26 touchdowns, three interceptions and led the Saints to the Alabama 5A State Championship.

For his dominant aerial attack in high school, Super Prep All-American ranked McCarron as the fifth best player in Alabama and the No.9 quarterback. He was ranked as the No.4 quarterback and No. 37 overall prospect nationally by ESPNU 150. Rivals.com ranked him as the No.7 pro-style quarterback and the No.5 prospect in the state of Alabama. He was a four-star recruit according to Scout.com.

Along with achieving recognition from sports media outlets, McCarron also racked up on awards upon graduating high school. He was the MVP of the Alabama-Mississippi All-Star Football Classic, an Alabama 5A State Champion and a two-time 5A All-State Selection (2007-08).

Before deciding on where to further his education and football career, McCarron tried out for the ESPN RISE’s Elite 11 competition (2008). The competition for prep athletes does more than just bring talented players from all 50 states together; it provides a healthy competition. In the Elite 11, you are competing against the best and brightest to earn a spot in the finals. Some of the most notable quarterbacks from the competition include Vince Young, Tim Tebow, Matt Leinart, Matthew Stafford, Tajh Boyd, EJ Manuel, Andrew Luck, Aaron Murray and Geno Smith. McCarron wowed recruiters at the competition, emerging as a quarterback having a strong and accurate arm.

Like most freshmen, especially at the quarterback position, year one is surveillance only. McCarron redshirted his freshman year in 2009 and watched Greg McElroy lead the Crimson Tide to its 13th national championship. As awesome as it sounds to win a national title as a backup quarterback, it’s a much better feeling to win one in the aspect of actually doing something on the field.

McCarron went from behind the clipboard to being on the field as a redshirt freshman in 2010. In nine games of action, he provided Alabama fans with flashes of how great the future can be. His first collegiate touchdown came against San Jose State on a 29-yard hookup to Julio Jones in the second quarter. Alabama finished the year at 10-3 and McCarron passed for 389 yards with three touchdowns.

With McElroy in the NFL with the Jets and McCarron having experience with the offense, many thought that starting job was his to lose. What was supposed to be an easy decision based on experience became a fierce quarterback battle in spring practice between McCarron and highly-touted freshman, Phillip Sims. Coming into the 2011 season, many Alabama fans favored Sims over McCarron. Physically, Sims looked stronger. He had more confidence and better arm strength. He was very athletic and coming from Oscar Smith High School (Chesapeake, Va.), Sims was completely more talented than McCarron.

The battle waged on into the regular season and though Sims split time with McCarron, the confidence he displayed in spring ball didn’t process on the field. Sims struggled in Nick Saban’s system and while he faded, McCarron shined. With his gunslinger mentality, McCarron won the starting job over Sims after the 27-11 victory against Penn State. He passed for 163 yards and didn’t turn the ball over.

In the course of the season, McCarron earned the name “game manager.” The term is used to describe quarterbacks that wow you with flashy statistics, but still get the job done in the aspect of making the right decisions with the football. McCarron and the Tide experience only one loss in 2011, the 9-6 heart-breaking defeat to the hands of LSU in Bryant-Denny Stadium. Upon other teams losing and Alabama remaining undefeated to end the season, McCarron and the Crimson Tide found themselves in the 2012 BCS National Champion Game.

The ironic thing about this was it became a rematch between Alabama and LSU. The opportunities that the Crimson Tide failed to capitalize on in the regular season, they made up for it in the title game. The fans that doubted and questioned McCarron before the season started began to believe in him after his performance in the game. Apart from Jeremy Shelley’s five made field goals, McCarron rose to the occasion. He went 23-34 passing for 234 yards was named Offensive MVP and helped Alabama secure its 14th national title in defeating LSU 21-0. He ended his sophomore year with 2,634 passing yards, 16 touchdowns and five interceptions.

Despite being the starting quarterback on a national title team, many felt that it was the defense and not the offense that led the Crimson Tide to a championship. Hearing the criticism loud and clear, McCarron went back to work. As a junior and second year as starting quarterback, McCarron was unbelievable. He led Alabama to a 9-0 start in the 2012 season and in five games he passed for 999 yards, 12 touchdowns and no interceptions. In his streak of 291 passes without an interception, many college football analysts pinned McCarron as the dark horse to win the Heisman Trophy.

For players that have won the coveted bronze award, they achieved it by coming up huge in critical games. In McCarron’s case that game was against LSU in Tiger Stadium “Death Valley” Baton Rouge, La. Under the night lights, ominous moon, Mike the Tiger and a record attendance of 93,374 fans, McCarron stunned the world. Backed up on their own 20-yard line, McCarron engineered an 80-yard drive that consisted of five plays with a 1:34 remaining in the game and trailing 17-14. The drive was capped off by a game-winning 28-yard screen pass from McCarron to TJ Yeldon. Alabama defeated LSU 21-17 and stuck the dagger in the hearts of Tiger fans.

Though Alabama lost 29-24 against Texas A&M and eventual Heisman-winner Johnny Manziel, McCarron and the Tide bounced back and defeated Georgia 32-28 in the SEC title game. On December 12, 2012, McCarron announced that he was returning to Alabama for his senior season. He saved his finest performance for the 2013 BCS National Championship Game against Notre Dame.  Coming into the matchup, the Irish defense was first in the nation, giving up 10.3 points per game. Against Alabama, they were carved like a turkey on Thanksgiving. McCarron put on a clinic as he was 20-28 passing for 264 yards and four touchdowns. The Crimson Tide notched it 15th national title winning 42-14.

He became the first quarterback to win back-to-back titles as a starter and ended his junior season with 2,933 passing yards, 30 touchdowns and three interceptions. He was named winner of the 2012 CFPA Quarterback Trophy on January 22, 2013.

So far this season, McCarron’s train hasn’t stopped. He is eyeing a third national title as the starting quarterback and the team’s fourth in a five year span. He has completely gained the trust of not only coach Saban and the fans, but his teammates around him. He may not impress you with gaudy statistics and that’s fine because it’s better to have wins and trophies than just great numbers. Thus far in his senior season, he’s completing 68.9 percent of his passes for 1,407 yards, 11 touchdowns, three interceptions with a quarterback rating of 161.2.

McCarron’s efficiency in high school has parlayed into his collegiate career. For his career at Alabama so far, McCarron has passed for 7,363 yards, 60 touchdowns and 11 interceptions. The question that most analysts have is whether McCarron is a game manager or a proven SEC quarterback? The answer is both. Coaches would rather have a quarterback that manages situations well, doesn’t turn the ball over and keeps the team in position to win rather than a quarterback that has all the numbers in the world, but commits a lot of mistakes. 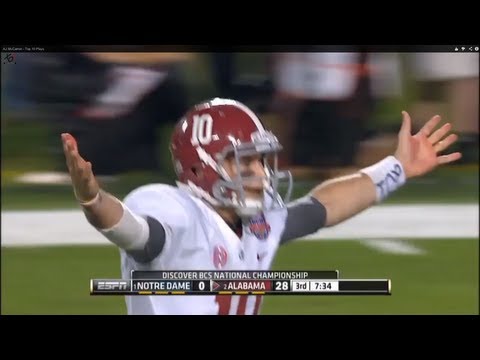