From Jim Goostree, Paul “Bear” Bryant (victory cigars) and Phillip Fulmer to Nick Saban and Butch Jones, the Alabama-Tennessee “Third Saturday in October” rivalry is one of the most bitter rivalries in college football.  In a total of 95 meetings, Alabama leads the series 49-38-7. The rivalry will take on a new chapter this Saturday, as the Crimson Tide will play the role of host for the Volunteers. CBS will air the matchup at 3:30pm EST.

For Alabama fans, the hatred is strong against Auburn and LSU, but it’s something about when Tennessee rolls in during October that the hatred intensifies. As for the Crimson Tide team itself, they enter Bryant-Denny Stadium for the second week in a row on a roll. Alabama is 7-0 and still the No.1 team in the nation. From the first game of the season to now, Alabama’s offensive line has greatly improved. The line is really starting to hit its stride and they are capitalizing on every opportunity on the field.

Last week, Crimson Tide fans witnessed a feat that isn’t accomplished a lot in college football. Against the Arkansas Razorbacks, Alabama dominated in all phases of the game and shut the Hogs off the scoreboard 52-0. The de’ja’vu thing about it was the score was the exact same score as last season. The only difference between this season and last season for Arkansas was the change at head coach (John L. Smith-last season) Bret Bielema and the change of venue (Fayetteville- last season) Bryant-Denny Stadium. Since giving up 42 points early in the season against Texas A&M, the Crimson Tide’s defense has played lights out football. In five weeks, they have surrendering just 16 points (two shutouts) and are now first in the Southeastern Conference and the nation in points allowed, giving up 9.7 points per game.

As for Alabama’s offense, everything is clicking on all cylinders. The Crimson Tide is averaging 40.7 points per game. AJ McCarron is well on his way in duplicating the same statistics he put up last season or maybe even better. Currently, he is completing 69.2 percent of his passes for 1,587 yards, 14 touchdowns (tied for fourth in the SEC), three interceptions with a quarterback rating of 164.6 (third in the SEC). The run game is also flourishing for the Tide. TJ Yeldon (100 carries for 657 yards and seven touchdowns) and Kenyan Drake (49 carries for 402 yards and seven touchdowns) are doing a tremendous job of taking the pressure off the passing game by getting huge yardage down field and following the offensive line. Both are averaging over six yards per carry.

For the Tennessee Volunteers, it’s been a long time since Rocky Top nation has had something to cheer about. Since the departure of Phillip Fulmer in 2008, the Vols have been on a downslope. Under coaches Lane Kiffin and Derek Dooley, it was like Tennessee had the keys in the ignition, but couldn’t get out of the driveway. The Volunteers had one good season under Kiffin (7-6 in 2009) and two horrible seasons under Dooley, despite all the talent they had.

As we fast-forward to this season, don’t look now, but Tennessee fans are starting to chirp again. The Vols are 4-3 and have a shot at becoming bowl eligible for the first time since 2010. The source behind the success of the program thus far has been the hiring of former Cincinnati head coach Butch Jones. Believe it or not, Jones has quietly come in and is starting to change the culture and mentality of the Volunteers program.

After the 59-14 beat down they took against Oregon earlier in the season, Tennessee is starting to look like a much improved team. They went toe-to-toe with Georgia (injuries) this year and even in a 34-31 loss, they showed the Volunteer faithful that they can compete and fight for four quarters.  After a nail-biting 23-21 victory against South Carolina, Tennessee will be riding the victory into hostile Bryant-Denny Stadium to take on the Tide and prove that this rivalry is still as competitive as it’s been in the past.

Tennessee has had some outstanding quarterbacks in its history including Peyton Manning, Tee Martin (1998 BCS Champion) and Casey Clausen. This season, the field general is junior quarterback, Justin Worley. At 6-foot-4, 222 pounds, Worley can make the big time throws, but he struggles with inconsistency. Against an Alabama defense that held Arkansas to 91 yards passing last week and Kentucky to 76 yards passing two weeks ago, it will be Worley’s responsibility to just manage the game and keep it close.

His statistics so far this season haven’t been anything good to ride home about, Worley is next to last in the SEC (13th in conference) completing 55.8 percent of his passes for 1,119 yards, 10 touchdowns, six interceptions, with a quarterback rating of 119.3. He will have to play completely out of his mind if he wants Tennessee to have a shot.

Like Alabama, the Volunteers have a potent rushing attack. Tennessee has a veteran offensive line, though at times they haven’t shown it. Running backs Rajon Neal (132 carries for 693 yards and eight touchdowns) and Marlin Lane (57 carries for 335 yards and four touchdowns) do a fine job of using their vision down field, following their offense line and getting to the perimeter of the defense. They are physical backs who are not afraid of running in between the tackles and gaining tough yards. It will be up to Neal and Lane to help take the pressure of Worley by gaining positive yards on the ground.

Tennessee has three physical receivers that will try to create mismatches against the Alabama secondary. At 6-foot-4, 215 pounds, Marquez North is a speed demon. He has great hands and understands how to run precise routes. He can relate locate the football and leap up to get it. He has 21 receptions this season for 281 yards and a touchdown. Jason Croom may remind a lot of Alabama fans and the team of Texas A&M’s, Mike Evans. Croom is 6-foot-5, 223 pounds. Not only is he physical at the line of scrimmage, but he can create separation and get to the inside or he will use his deceptive speed and get to the top of the defense. Croom has nine receptions for 133 yards and a touchdown.

At 6-foot-1, 193 pounds, Josh Smith is another receiver that Worley will have to for. He may be in the slot for the majority of the game. Like the previous two receivers, Smith has the hands, speed and toughness to catch the ball in traffic. The most versatile receiver on the team happens to be the shortest receiver and that is Alton “Pig” Howard. Though he’s 5-foot-8, 185 pounds, Howard is a gamer. He reminds people of Oregon’s DeAnthony Thomas in the ability to catch the ball in space and make defenders miss. The Volunteers will use Howard as a receiver, return specialist and don’t surprised if he’s in the backfield taking handoffs. He has 23 receptions for 251 yards and three touchdowns.

The special moment for this game; however, remains to be seen. Tennessee’s defense must play huge if they want to defeat Alabama. The Vols are giving up 27.0 points per game and if you are Butch Jones that’s not going to cut if you desire a signature win. 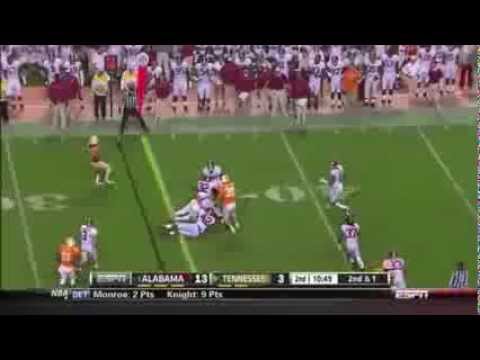