Baton Rouge, La. It’s the home of good food, musical taste, exotic festivities and the Tigers of Louisiana State University. Alabama rested this week, but next Saturday the Crimson Tide will battle LSU inside Tiger Stadium.

LSU is a much improved team, despite losses to Mississippi State and Auburn. The Tigers defeated Mississippi 10-7 on Oct. 25, 2014, crippling its hopes of getting into the College Football Playoff.

Sophomore receiver Travin Dural has emerged as Jennings’s primary target. Dural leads LSU’s receiving corps with 27 catches for 676 yards and seven touchdowns. He’s averaged 75.1 yards receiving per game. True freshman Malachi Dupre is a star in the making. He has 11 receptions for 257 yards and four scores. Trey Quinn has 16 catches for 190 yards. Redshirt freshman John Diarse has nine receptions for 165 yards and a touchdown.

LSU doesn’t have the huge playmakers from recent seasons, but defensive coordinator John Chavis still makes this defense tough with his play calling.

Sims’s mobility was an asset against Tennessee. It will be pivotal against LSU. Chavis will have the Tigers rushing four, but don’t be surprised if he includes some blitz packages. Sims has been sacked four times, but he’s recorded 250 yards rushing and five scores.

Sims has exceeded expectations in the passing game. He’s completed 65.5 percent of his passes for 2,034 yards, 15 touchdowns and three interceptions.

Junior running back T.J. Yeldon is 382 yards away from a third 1,000-yard rushing season. He’s totaled 618 yards and five touchdowns. Sophomore Derrick Henry has 530 yards rushing and four scores. Tyren Jones has 22 carries for 123 yards and a touchdown.

Alabama and LSU have met 78 times. The Crimson Tide leads the series 48-25-5. Alabama has won the last three meetings (2012-present). 2011 was the last time LSU defeated Alabama. Bryant-Denny Stadium was the venue and the Tigers won 9-6 in overtime.

This rivalry has had its epic moments. Julio Jones caught a 73-yard screen pass from Greg McElroy for a touchdown in 2009. Alabama defeated LSU 24-15.  The Crimson Tide battered LSU’s offense in the 2012 national title game. The Tigers totaled 92 yards and crossed the 50-yard line once. Alabama beat LSU 21-0. AJ McCarron had his worst game statically against LSU in 2012, but it didn’t matter. A 28-yard screen pass from McCarron to Yeldon made all the difference. Alabama defeated the Tigers in Baton Rouge 21-17.

LSU was rudely introduced to “sweet feet” in the 90s. Shaun Alexander exploded onto the scene as a freshman in 1996. He recorded 291 rushing yards and four touchdowns on 20 carries against the Tigers. Alabama won 26-0. Alexander won three out of four meetings against LSU as a member of the Crimson Tide.

Auburn’s victory over Ole Miss has given Alabama complete control of its destiny. The road to a Southeastern Conference title goes through Tuscaloosa if the Crimson Tide wins out. A victory inside Neyland Stadium was a turning point, but a win at Tiger Stadium would be a statement. CBS will air the matchup at 7:00 p.m. Alabama’s head coach Nick Saban is taking it one game at a time. The Crimson Tide will be without freshman left tackle Cameron Robinson this week. Robinson suffered a high ankle sprain against Tennessee. 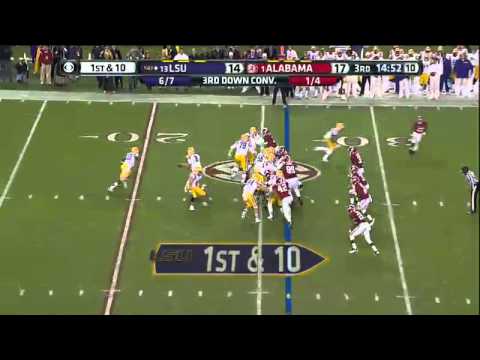