A game of inches. Football ultimately comes down to two questions, which team can impose its will? And which player will rise to the occasion?

Points would come at a premium, as both defenses were talented. Penn State allowed an average of 8.8 points per game, while Alabama gave up 14.6 points per game.

The Crimson Tide drew first blood, after a scoreless first quarter. Its quarterback Jeff Rutledge found Bruce Bolton for a 30-yard touchdown in the second quarter. Alabama’s defense stifled Penn State, holding it scoreless at halftime. The Nittany Lions were usually stout against the run, however, Alabama’s offense totaled 129 rushing yards in the first half.

A missed field goal from Alabama’s Alan McElroy and a Pete Harris interception gave Penn State life in the third quarter. Its quarterback Chuck Fusina connected with tight end Scott Fitzkee for a 17-yard touchdown to tie the game.

Both defenses remained vigilant, but a gamble from coach Bryant helped Alabama’s special teams create instant offense. He switched running back Major Ogilvie for wide receiver Lou Ikner on special teams. Ikner made the gamble pay off with 62-yard punt return, giving the Crimson Tide the ball inside Penn State’s 10-yard line. The Nittany Lions held serve on first and second down, but an option play got Alabama into the end zone on the third down.

Coach Bryant and offensive coordinator Mal Moore recognized that Penn State wasn’t in position to defend the option. Rutledge got the defender to commit to him, resulting in his pitch to Ogilvie for a touchdown. The Crimson Tide took a 14-7 lead into the fourth quarter.

The fourth quarter was filled with turnovers and huge defensive plays. Alabama’s cornerback Don McNeal secured a crucial tackle on Fitzkee to save a touchdown. He untangled himself from a receiver, and knocked Fitzkee out-of-bounds at the 1-yard line with a picture perfect hit.

Fullback Matt Suhey’s failed attempt to score on third and goal, helped set up one of Alabama’s biggest defensive plays in program history. Penn State had an opportunity to tie the game on a fourth and goal from the one-foot line. It tried to power the ball in with running back Mike Guman, but he was met immediately by Alabama’s Barry Krauss and Murray Legg.

Guman was stopped short, resulting in a turnover on downs for Penn State. Krauss, who made the brunt of the hit, was knocked unconscious and had lost some feeling in his extremities.

He was able to get up and run off the field under his own power. The Nittany Lions would have one final chance to score, but its drive failed due to an incomplete pass on fourth down. 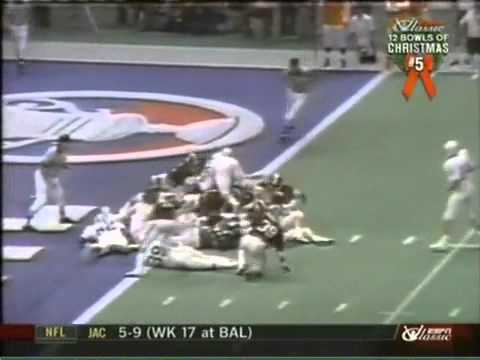