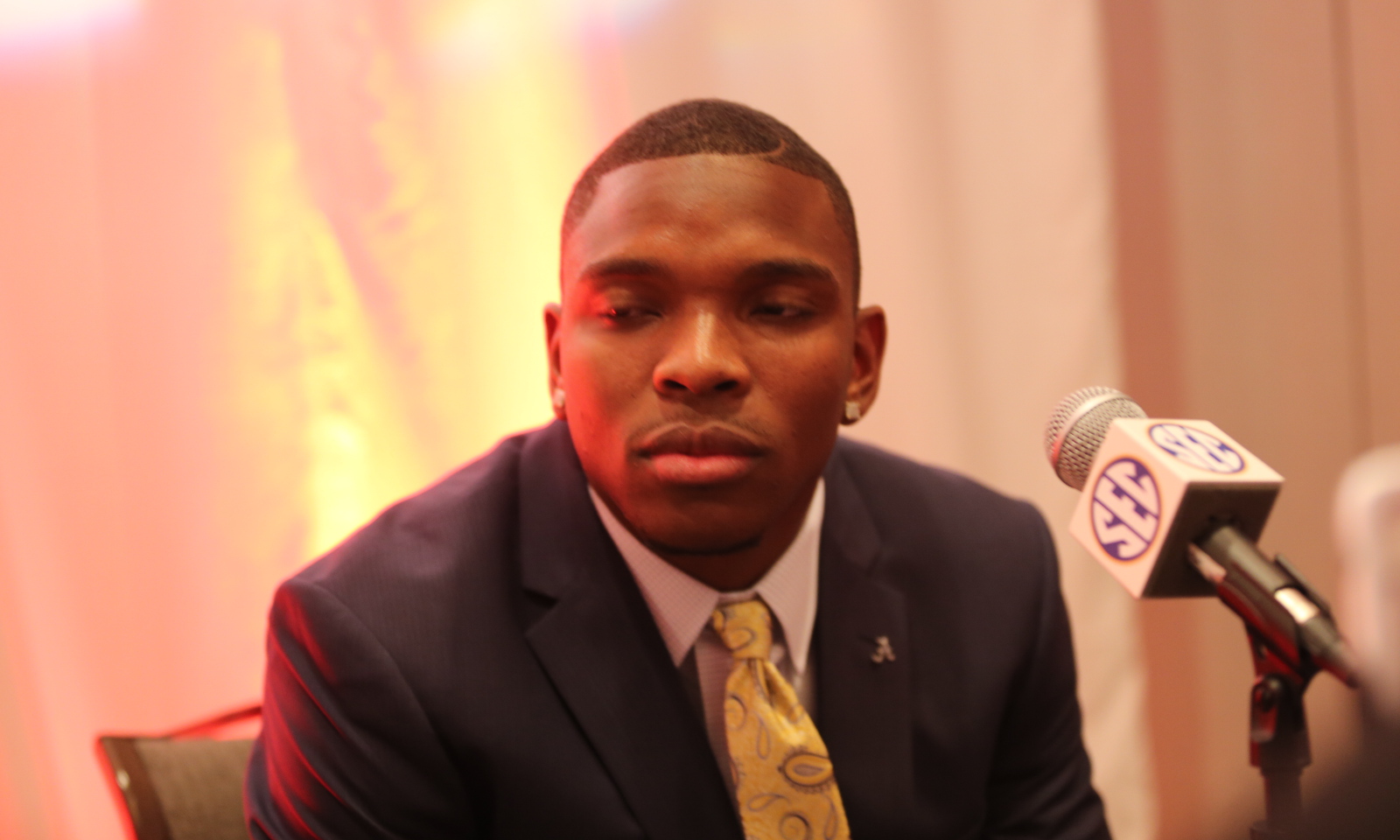 HOOVER, Ala.| He went from getting burned by ex-Auburn wide receiver Sammie Coates in the 2014 Iron Bowl to being one of the most improved players and on Wednesday, safety Eddie Jackson was one of three Crimson Tide student-athletes that came with Nick Saban to SEC Media Days.

Jackson, who signed in Alabama’s 2013 recruiting class, had a breakout season in 2015.

He led the team in interceptions (six) and was credited with 230 return yards and two touchdowns. The Fort Lauderdale, Florida native posted 46 tackles, three tackles for loss and two pass breakups.

While most look at Saban as a tightly-wound control freak that just wants to win, Jackson sees something special about the 64-year-old who enters his 10th season at the helm in Tuscaloosa.

“He’s one of the best coaches in the nation, but he’s also a great father figure,” Jackson said. “He helps you on the field in preparing for games and off the field, when it comes to life situations.”

Part of Jackson’s success last season was due to a position change. After struggling with his recovery speed in 2014 (knee), he was moved from cornerback to safety in the summer of 2015.

First-year secondary coach Mel Tucker mentored Jackson and gave him the tools to guide Ronnie Harrison, Marlon Humphrey and Minkah Fitzpatrick—who were all freshmen at the time.

Jackson started the 2015 season with an interception off Wisconsin’s quarterback Joel Stave in the fourth quarter. He record his second pick against No. 8-ranked Georgia, and one that resulted in a 50-yard touchdown return. Despite both efforts coming at critical moments, Jackson’s multi-interception game against Texas A&M was a showcase of his talent to the world. His 94-yard touchdown return in the second quarter gave Alabama a 28-13 lead at halftime and it ultimately won the game, 41-23. Jackson said the main advice that Tucker gave him was come in and work hard.

“He told me that whatever I put on film is what people will see,” he said

“It’s about coming in, competing everyday and trying to be a leader.”

Jackson’s leadership received a coronation in the 2016 College Football Playoff, when he intercepted a pass off Clemson’s quarterback Deshaun Watson—giving him six on the year.

Coach Saban is never shy about playing freshmen, especially if they are ready. Jackson singled out two defensive backs and a wide receiver that could have an immediate impact in 2016.

“All of the young defensive backs have been impressive, but it’s been Shyheim Carter and Aaron Robinson that have stood out the most,” Jackson said. “Both guys take coaching well, they compete and play fast and even when they make a mistake, they improve on the next rep.”

“Trevon Diggs has really done a good job,” he said.

“He’s another guy that takes coaching well and is putting in work in the weight room.”

Alabama’s chemistry doesn’t start in fall camp or during the regular season; it starts in seven-on-seven drills in the summer. Seeing players compete against each other at the highest level builds character, technique and understanding of the system that one is in every day.

“We just go out and play fast in seven-on-seven,” Jackson said.

“Building that chemistry in the summer is important because you can see where we are as a team. You get to look at what guys have down pact and where they need to improve.”

A monster year is expected of Jackson as a senior.

He decided to turn down NFL Draft offers and return to Tuscaloosa for one final year. He has been named to the Chuck Bednarik, Bronko Nagurski and Jim Thorpe award preseason watch lists.