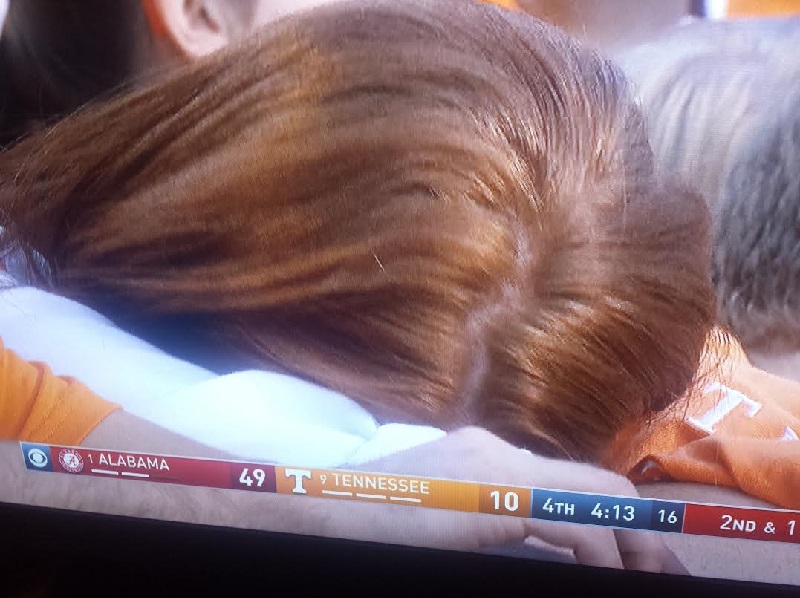 As a sportswriter for for quite some time now, you just can’t be politically correct and you have to call them as you see them. So to talk about this game, there’s no polite way to put it, this was a good old fashioned butt kicking.

Call it What it Was… A Butt Kicking. Alabama Destroys Tennessee

Tennessee was building brick by brick until Saturday afternoon when Alabama came into Knoxville and simply kicked down that brick wall and destroyed Tennessee in what could only be called what it was, a very thorough butt kicking. The final score was 49-10 but it really wasn’t that close or that competitive. Saban mercifully called off the dogs in the forth quarter or they might have hung 21 more on them.

There is no excuse because no one thing made would have made a difference in the outcome.

How bad was it? ArDarius Stewart, an Alabama receiver, ran for almost as many yard in one run, (29), as Tennessee did as a team, (32). Overall Alabama out rushed Tennessee 438 to 32. For the math challenged folks, that’s over 400 yards more.

Tennessee’s only touchdown came due to an Alabama fumble which gave them a short field touchdown.

Following the game, Butch Jones, the Vol’s coach said, “They’re the No. 1 team in the country and rightfully so. Sometimes, they just line up and say ‘we’re better than you.’ ” And indeed they did just that. Jones went on to say that they just couldn’t match up anywhere man to man and that this is a line of scrimmage league and it was clear by the rushing totals of each team how that went and who owned the line on both sides.

It is going to be hard to watch this game film and find anything to really build on if you’re Tennessee. But on the other side of the field Nick Saban is upset that his team had dropped balls, missed open receivers and gave up a rushing touchdown and two pass plays for over 15 yards. He thinks there’s still a lot of room for improvement on the Crimson Tide team, but he did force a small smile in a post game interview with CBS and say he was a glad to see a more complete game.

The sad thing for Vol fans and perhaps the team, is realizing that if they do take care of business and LSU or some other SEC team beats Florida, then they’ll have to face this same team again, who by then, will have all their bugs worked out. Right now, it’s just too soon to see anything that makes that possibility an attractive one.

Butt kickings do that to a team and today that’s just what Tennessee got.