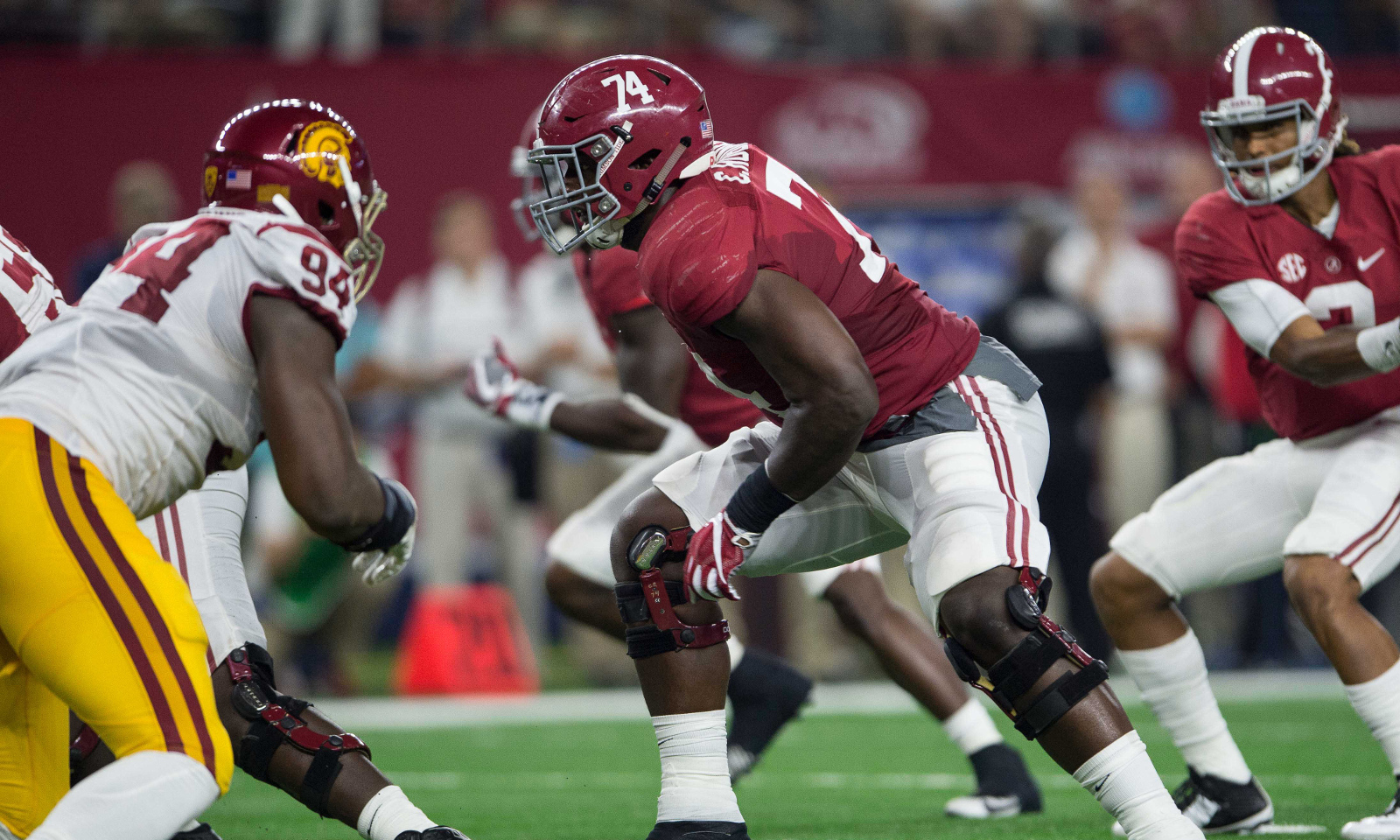 Since defeating Clemson in the College Football Playoff national title game, Alabama has faced six athletic, fast-paced teams. An SEC West showdown against Louisiana State University will pose a challenge for the Crimson Tide, but one that it’s very familiar with. Nothing fancy happens when both schools meet up in November, however, there is something about an old-fashion trench warfare that gets NFL scouts excited.

Offensive tackles Cameron Robinson and Jonah Williams have been solid this season, despite a few uncharacteristic fouls. Both players have garnered weekly honors from the Tide’s coaching staff and the Southeastern Conference, while guiding Lane Kiffin’s offense to 43.9 points and 498 total yards a game.

The duo set the edge for 200-plus rushing yards in six of the team’s eight games, including a 400-yard outing against Tennessee in a 49-10 victory. Robinson, a native of Monroe, La., has faced some of the nation’s top edge rushers. He returns home Saturday to rumble with probably his most difficult test, LSU’s Arden Key.

The 6-foot-6, 231-pound defender leads the team in sacks (eight), tackles for loss (nine), quarterback pressures (eight) and forced fumbles (three). His eight sacks also rank second in the SEC and tied for second nationally. Key possesses a quick first step to the inside, while his strong hands frustrate offensive linemen.

Even after mentioning Key during Wednesday’s presser, Alabama coach Nick Saban still tabs Robinson as a guy that will be more than able to neutralize the sophomore at Baton Rouge, La.

“He’s been challenged all season and certainly will be challenged in this game. Key is a very good pass rusher and LSU is very athletic up front. They present a challenge for both of our tackles and our inside guys because of the way they can rush.”

Williams, a native of Folsom, Calif., has improved with each performance. Tigers’ defensive coordinator Dave Aranda will have Lewis Neal on Williams. The senior is one of the team leaders in sacks (3.5) and tackles (4.5), while carrying 33 total tackles. LSU’s 20 sacks have resulted in eight turnovers, including six interceptions.

Quarterbacks have completed just 58.2 percent of their passes (135 of 232) against the Tigers, leading to an average of 209.7 yards a game. Alabama’s Jalen Hurts has hit on 63.2 percent of his attempts, while tossing for 197.3 yards a game—a shade under what LSU’s defense allows.

Despite his poise and composure, Hurts has been sacked 10 times.

He’s accounted for nine turnovers, with five being interceptions. Ex-Alabama signal callers AJ McCarron and Blake Sims know all too well about how difficult it is to remain calm at Tiger Stadium. Both guys guided their respective teams to wins, but the Tigers took both quarterbacks down to the wire. A win over LSU continues the Tide’s pace in reaching Atlanta and the College Football Playoff. NFL Draft pundits will keep their eyes on Alabama’s front line, but especially Robinson–as he’s projected to be taken within the first five picks.