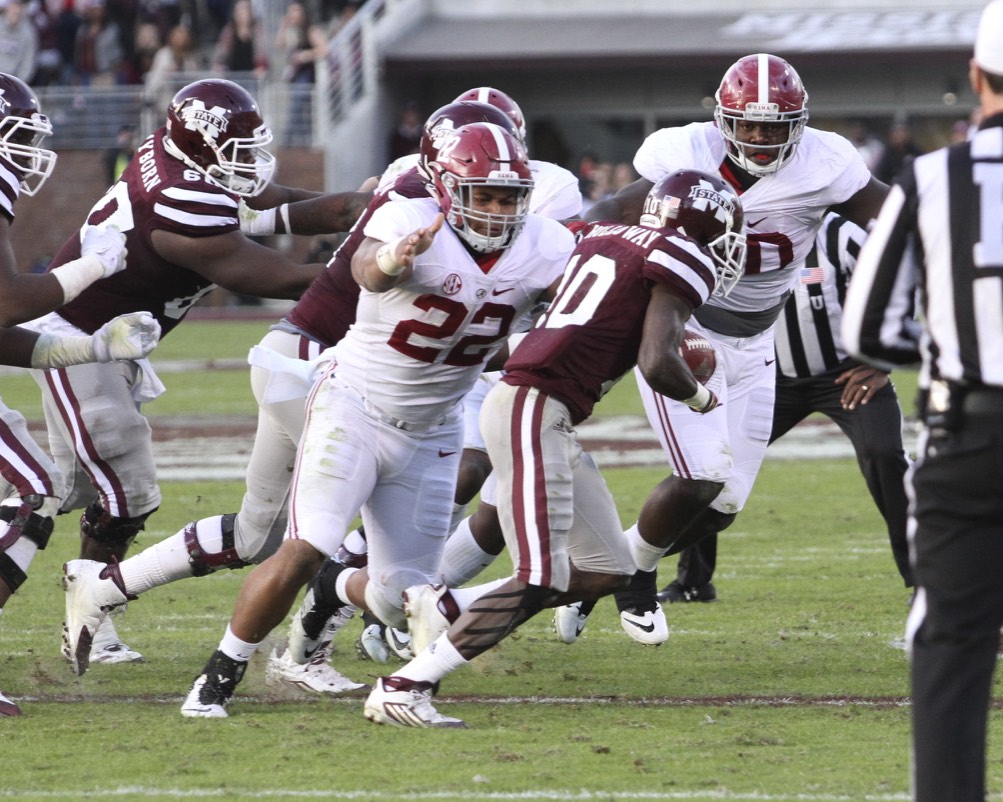 How much did Mississippi State’s big win help them gain momentum in taking on the Tide this weekend? Read our take on this game and see if you agree.

Mississippi State – Just Not Hot Enough for the Tide This Weekend

Last week Mississippi State shocked the world by thoroughly whipping the fourth ranked team in the nation in a game that really was never as close as the score indicated. That 35-28 score represents two late fourth quarter touchdowns for the Aggies after the game was all but in the books.

The simple truth was, the Bulldogs lined up and just whipped the Aggies in almost all phases of the game. State just ripped the A&M defense wide open, rushing for 365 yards and tacking on another 209 through the air. That was 574 yards of total offense on what may be the second best team in the SEC.

Meanwhile on defense, the Bulldogs gave up a very begrudging 117 yards. Only the quarterback gained more than 33 yards on the day. Because the Bulldogs went into prevent in the fourth quarter, the Aggies were finally able to put some passing yards, but until then, they were tough all day keeping the A&M passing game very limited.

The game was not only a big butt whipping, but also served to give them a big boost heading into a game with the best team in the SEC, the Alabama Crimson Tide.

So will the Bulldogs be a hot team that proves hard for the Tide to handle this weekend at home?

While it will be a physical game, while Alabama may still be on a huge high from dominating LSU with that stifling defense, the crazy stars just aren’t aligned enough to catch Alabama off guard enough for the Bulldogs to pull off this upset.

Why? In a word, muscle. The Bulldogs just don’t have enough.

Texas A&M have been suspect to any team that can field a good running game and State exploited that as Alabama did. But if the Bulldogs think they can come close to duplicating their running yardage on this Crimson Tide defense, they’re just delusional. Just ask Leonard Fournette and LSU. So that leaves them with trying the passing game. The Bulldog passing offense is the 80th best in the country, so that doesn’t look good either. They throw one interception for every two touchdowns they throw. That’s really not good and that’s being very politically correct.

Combine that to the fact that they only complete about 38% of their third downs and you’ll see an awful lot of three and outs and punts in this game from the Bulldogs.

When Alabama has the ball, the bad news continues for the Bulldogs. Everyone knows Nick Saban likes to run the ball and they will find they can against State. Mississippi State has the nation’s 47th best rush defense. Compare that to LSU’s which comes in at number 19. Alabama almost doubled the rushing yardage that LSU normally gives up and LSU is a much better defense than the Bulldog’s. If they double the yardage that MSU normally gives up, then Alabama will rush for about 300 yards and we all know what that means.

The boys in Las Vegas weren’t impressed by the Bulldog’s big win over the Aggies as far as beating Alabama goes and neither are we at Touchdown Alabama Magazine. Presently the line hovers around the Crimson Tide being a 30 point favorite. That sounds about right. If pressed to offer a score prediction, 38-7 sounds about right if the weather is good and 24-0 on a wet field.

While the game against A&M marked the high point of the Bulldog’s season, it just won’t have a carry over effect this weekend. Yes they got hot, but a Crimson Tide rolls and washes all that heat away.