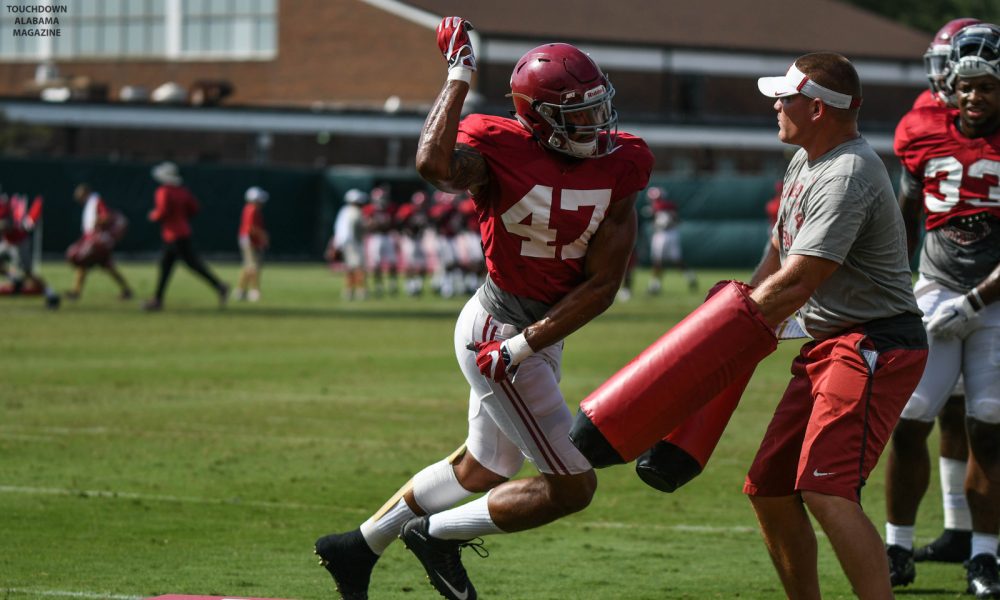 The experience he gained on special teams and defense was invaluable last season, but now Christian Miller has the size and knowledge to be a leader this fall. With Ryan Anderson and Tim Williams now cashing checks, Miller represents the next wave of elite Alabama pass rushers.

During spring testing, he turned in a 40-time of 4.69 seconds and posted one of the team’s best vertical jumps at 35 inches. Miller had the best broad jump among linebackers – reaching 9 feet, 11 inches. Besides the emergence of Terrell Lewis and Anfernee Jennings, the South Carolina native stands with Rashaan Evans (inside and outside) as the lone effect edge-rushing backer.

Miller’s initial contribution in his career at the University of Alabama came on a punt return in 2016, where he assisted safety Eddie Jackson to an 87-yard touchdown versus Ole Miss.

After that moment, he would turn in two career-tying games against Kent State and Tennessee – recording three tackles a piece. The 6-foot-4, 240-pounder displayed quickness off the edge in creating 2.5 tackles for loss and two sacks (Western Kentucky, Kentucy and Arkansas).

Before growing into his role, Miller was a reserve on the Crimson Tide’s 2015 national championship squad through 12 games and redshirted his freshman campaign in 2014.

Once a five-star prospect, he was No. 48 on the ESPN 300 and a finalist for South Carolina’s “Mr. Football” during his senior year in 2013. Miller collected 188 total tackles and 24 sacks, earning him honors as a semifinalist high school Butkus Award (top linebacker).

His father, Corey Miller, played in the National Football League for seven seasons (1992-99) with the New York Giants and Minnesota Vikings. Christian Miller has led outside backers through position drills throughout fall practice, under the guidance of coach Tosh Lupoi.

Upon the conclusion of last year’s Southeastern Conference Championship, Tim Williams pointed to Miller as the Tide’s next star on the rise. Next week’s meeting versus Florida State and throughout the regular season will prove how accurate was Williams’ statement.