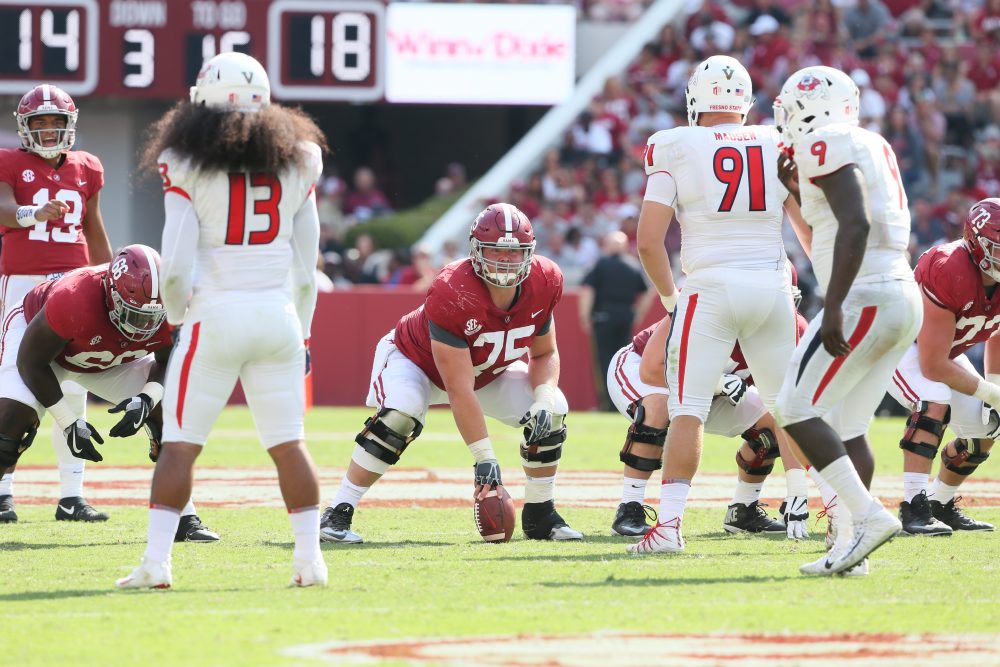 When you hit 60, you see things differently than the young folks who cover the game. For the things you may not read about elsewhere, try this.

The Old Guy’s Take on the Alabama / Fresno State Game

This series of articles looks at things that won’t be reported as much by others because as one of “Old Guys” I see things a little differently than the “reporters” who just give you the facts and recap what happened.

First of all, shame on you Alabama fans. Yes, I know there was looming bad weather, but it was a long way away and anytime you see tickets for sale on the internet for $6 you know the stands are going to be empty and they certainly were. What a shame for the stands to be so empty. I can’t get anyone to give me an “official” stadium count but there didn’t seem to be 75,000 of the 100,000+ seats full.

Shame on you Alabama fans.

Yes, I know that even I predicted it to be as bad as a 45 point rout, but I hear folks all the time saying they wish they could go to a game. Well folks, here was your chance.

Ok, enough of beating up the fans and we’ll go to point two which is the overall poor play of some of the rookies that everyone was salivating to see get some game time.

Tua Tagovailoa sure didn’t seem ready for prime time once he was given a chance now did he? So for all those folks wishing he had more time, be careful what you wish for. Six of nine doesn’t sound bad or even look so bad on the stat sheet and his 7.1 yards per pass matched Hurts down to the tenth of a yard, so what was so bad? He never looked comfortable, he badly missed some make able throws and he never appeared to be the ringleader in charge of the circus.  While we’re all glad he glad some playing time to help keep these things from being so bad in his next outing, his time on the field made me appreciate Jalen Hurts more than maybe I have been.

Secondly, Saban decided to rest the big boys this week and give Najee Harris the bulk of the carries. Twice as many in fact as either Harris or Scarbrough got. What we learned is that he’s no savior in waiting, at least not yet and he didn’t perform nearly as good as Josh Jacobs did when he had similar chances his freshman year. Once 100%, it’s clear that Najee will be a solid fourth string. Despite breaking one long run for 25 yards, his 5.4 yards a carry may look good, but for Alabama backs that get that many attempts, it isn’t great at all.

Jerry Jeudy was supposed to be the next Julio Jones, but it didn’t show in this game and his blocking skills need to be worked on. Perhaps that why he’s not gotten more opportunities. In Saban’s world if you don’t block for others, you don’t get the chance to shine yourself.

But really, this old guy just hates these creme puff games. You can’t tell much really how great the favored team really is because they aren’t taking it as serious despite Saban’s process and the let everyone play mentality seeps in and mistakes are made. Don’t get me wrong, I’m not complaining this went on, because the mistakes made today but regulars and subs could be the good plays made tomorrow. In Saban I trust. But it’s really hard to gauge just how good the offense is coming along against a team like this.

Since I’m grumbling, let me say I also saw too many broken arm tackles and Jeremy Pruitt saw them too. He was really animated on the sidelines over that and a couple of badly missed plays by the defensive backs. I’m sure that will be brought up in practice this week and those who brought the wrath of Pruitt will likely get it again from Saban.

Overall, everything I saw didn’t give me grumbling material. I was pleased to see a little better play calling especially a play to a wide open tight end who was hit in perfect stride. Note to Dabol, file that one, but put a big yellow sticky note there to mark that one. I have a feeling that one’s going to be there in quite a few more games. Overall, I thought some of the play calling showed a real improvement over last week, so that’s one thing going at least in the right direction.

Of things going in the wrong direction, did anyone else notice our talented and highly taunted left tackle repeatedly beaten in pass protection by Fresno Freaking State? I said before the season that Saban usually likes his tallest and fastest guy at left tackle and that isn’t 6’5” Jonah Williams. I’d like him better at right tackle and give our young freshmen the experience early on in the season to built that position. Scott Lashay at 6’7” is too inches taller and Alex Leatherwood is 6’6” and that much wingspan is very important at that position.

Williams was beaten on speed rushes as well as on inside moves and once again, with nothing against the opposing team and players, but this was Fresno State, not Florida State.

Ok, back to something good. Ronnie Harrison, it’s good to see just how good you can be when you’re healthy. You and Minkah Fitzpatrick can be real game changers back there but Ronnie, you hit like a truck and you’re sure to cause some turnovers soon. Harrison and Raekwon Davis led the team with eight total tackles. If anyone was worried about any lingering injury with Harrison, you can put those fears to rest.

While Ronnie Harrison was supposed to be a starter and supposed to be a star, few people gave that kind of preseason accolades to Keith Holcomb who is quickly developing into a real star himself. He finished the day just one tackle behind the leaders and a great pass breakup. Folks, he shined in the FSU game too and has earned his playing time. With two of our linebackers down for the count, Holcomb certainly jumped to his feet and saluted when the call went out for “Next Man Up”.

Lastly, I spend a lot of time watching the center and Alabama has a good one. Though I have only seen the game once and I sure don’t grade as tough as Saban, Bradley Bozeman is just a workhorse on that offensive line. Those three poor slugs in the middle of the offensive line don’t get the notoriety of the tackles or the paychecks they get in the NFL, but everything begins with a good snap and shoring up the center of the line and Alabama is blessed to have such a center as they have.

That’s the stuff that this old guy noticed this week that you may have missed and others may not tell you. If you saw something you’d like to present, please use the comment section and let us know what you saw, good or bad.

Larry has been published in almost every media outlet for college sports and now primarily writes here for Touchdown Alabama. Follow Larry on Twitter for inside thoughts and game time comments at ttps://htwitter.com/LBSportswriter