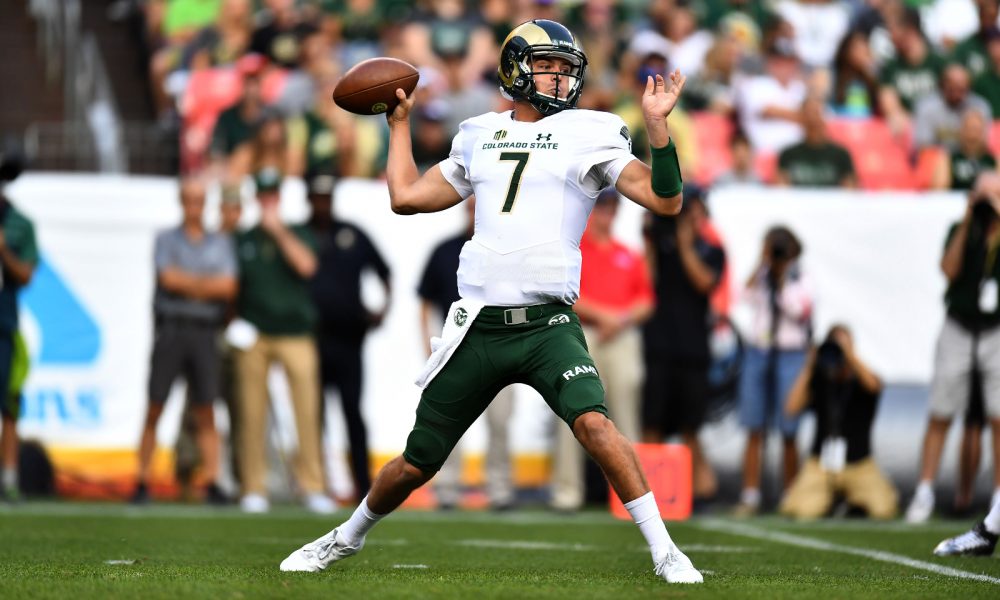 From being an offensive coordinator at the University of Georgia to entering his third year as a head coach, Mike Bobo is continuing to build Colorado State into a strong football program.

After a 2-1 start, Bobo will take the Rams to Bryant-Denny Stadium in Tuscaloosa (Ala.) this weekend to face head coach Nick Saban and the Crimson Tide.

The last time both schools played each other was during the 2013 season, when AJ McCarron and company earned a 34-0 victory.

Much like Jim McElwain did before he became the man at Florida, Bobo is starting to cultivate some talented players at Colorado State.

While ESPN2 will have the call on Tide and Rams at 6:00 p.m. (CT), yours truly lists five impact players for Colorado State heading into Saturday.

Saban opened his presser on Monday giving praise to Nick Stevens and for good reasons.

The redshirt senior enters his third year starting at quarterback, following his performance of completing at least 60 percent of passes the last two seasons.

Through three games this year, Stevens is completing a shade under 60 percent – 59.5 percent – for 980 yards passing with six touchdowns to four picks. During his 13 seasons (2001-14) at Georgia under head coach Mark Richt, Bobo mentored Matthew Stafford, Aaron Murray, David Greene and D.J. Shockley into being marquee leaders under center.

He and Stevens will embrace the challenge against Alabama.

He’s been a near 1,000-yard rusher in back-to-back seasons (2015, 2016), but this year could possibly be the time he eclipses the mark. Hailing from Louisville, Ky., Dayln Dawkins transferred to Colorado State from Purdue in 2014.

After sitting a year, he would prove his versatility as both a rusher and pass catcher. Dawkins chimed in with 867 yards rushing and two touchdowns, while snatching 24 passes for 178 receiving yards and a touchdown in 2015.

Last season, he elevated his game to 919 yards rushing and four scores.

Dawkins averaged 77 rushing yards a game, and caught 20 passes for 162 yards and a touchdown. He’s currently leading the Rams in rushing through three games, collecting 183 yards and two touchdowns on 41 attempts.

In the same manner he did with Stevens, Nick Saban displayed respect for the way Michael Gallup plays the game at wide receiver for Colorado State. Gallup is coming off a 1,000-yard season – 1,272 – in which he hauled in 14 touchdown receptions on 76 catches from Stevens.

He enters this week’s meeting with an average of 101.3 yards a game. Gallup has caught 26 passes for 304 yards receiving and a touchdown. The senior will pose a challenge for Alabama’s secondary, especially with his ability create separation and make consistent receptions in traffic.

Josh Watson returns as the leader of the Rams’ defensive front seven.

He finished second last season in total tackles (90), while picking up 7.5 tackles for loss, 1.5 sacks and five quarterback hurries. Now a junior, Watson leads the team in tackles (25) after three games and has two stops for loss.

The 6-foot-2, 240-pounder from Missouri averages 8.3 tackles per game, and has helped limit opponents to 18 points per contest. He will see a heavy dosage of Damien Harris, Bo Scarbrough, Josh Jacobs (possibly), Najee Harris and Jalen Hurts; however, Watson is ready for the competition.

Hicks and the rest of Colorado State’s defensive backfield will have its hands full with trying to limit Calvin Ridley, Robert Foster, Cam Sims and others in the Crimson Tide’s receiving corps.

While he’s fourth in tackles (14), Hicks leads the team in interceptions with two.

Hailing from Gardena, Calif., the 6’1″ and 185-pound safety is one that brings the hammer in both run support and in coverage. Regardless of not having the horses in the secondary that can run with Alabama’s receivers, Hicks and the Rams can at least make them work for yardage.