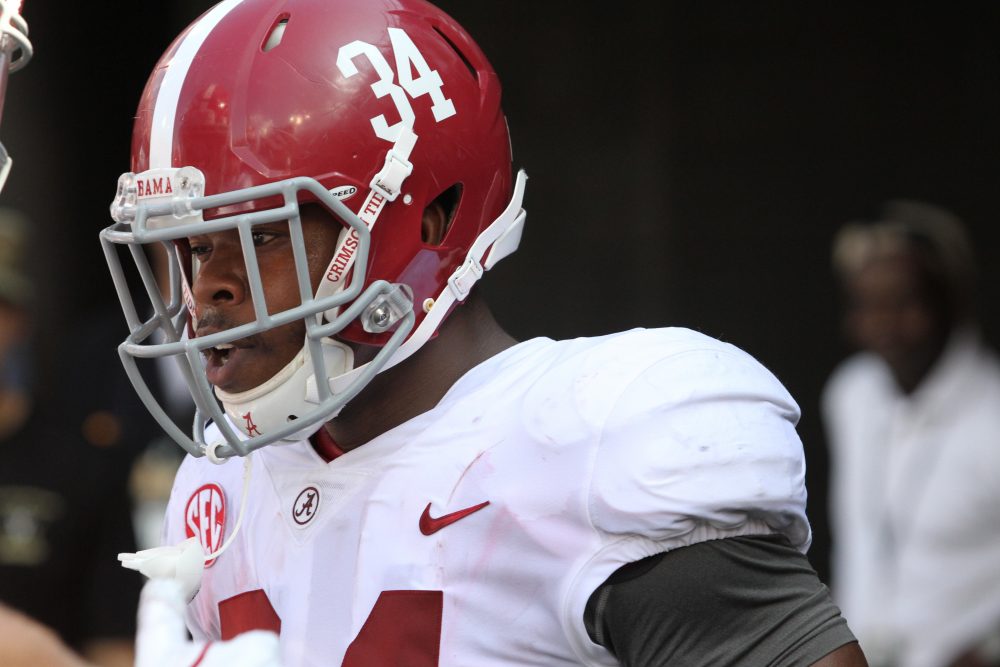 Many before this game still weren’t convinced that Alabama had a clear leader or Alpha Dog in the running back corps. This article shows there’s no doubt anymore.

Can we now officially close the arguments over who is real Alpha Dog in that pack of running backs? If you think Scarbrough is still better, quit reading, put a chair in the corner of the room and sit there for an hour and think about it with a dunce hat on your head until you come to the revelation that you are wrong.

There are six games on the books now, something that everyone would agree is a good measuring stick of good and bad teams good and bad offenses and similar carry opportunities. So if you thought Saturday’s stats were skewed because of one long run, you just aren’t paying attention. Here are the season stats so far.

Here is the simple bottom line, with more carries than Damien Harris, Bo Scarbrough only has 58% of Harris’ production and his average per carry is about 4 yards per carry more.

Now, who’s your daddy? If you still think that Scarbrough, you just don’t know football.

Harris ended last season with more yardage and more yards per carry than any running back and he sure looks to do the same this season as well. He was Alpha Dog last season, but somehow Scarbrough got all the preseason hype and so forth. Put that to bed.

The only thing left to debate is why?

And my opinion on this is just that, an opinion. Your’s is just as valid and may be just as logical, but for argument’s sake, here’s mine to consider.

Harris runs with his head up and sees cracks and developing openings that Scarbrough doesn’t see with his head done battering ram style. With both have equal open field running speed, Harris seems quicker to move side to side and has a much faster cut. Harris runs slippery, able to shift his weight from side to side and lean away from grasps. Scarbrough runs forward to the hole he’s supposed to run through. If it isn’t there, he lowers his head and tries to push the pile forward. If a hole is there and a safety comes in, Scarbrough hasn’t the elusive ability to slip the oncoming tackle and the safety grabs him and prays for help. In short, it’s Harris’ ability to see the developing cracks and holes in the lines and squirt through them and his gliding, sliding style of running that makes him more productive than Bo’s battering ram style.

Of course with that said, there’s a big reason why the coaches, who are the millionaire experts on the team, would rather have Scarbrough running the ball on a third and one over Harris. That battering ram will get that yard almost every time. And for argument’s sake, those kinds of opportunities have hurt Bo’s yard per carry average.

But whatever the reason is for the way the stats come to what they are, the numbers don’t lie. Damien Harris is the Alpha Dog.