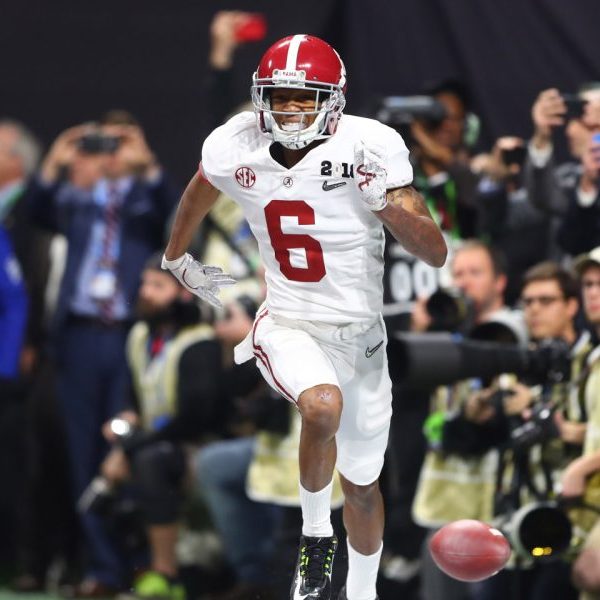 The University of Alabama has four studs at wide receiver – including three primary veterans – however, one target in particular continues to be at the bottom of the pecking order.

After the 2018 College Football Playoff National Championship Game, people could not escape the heartfelt “My Heart Will Go On” song from Titanic by Celine Dion.

The song, which was stitched into every video post on Twitter from Crimson Tide fans, became a reminder of a play that’s now in the folklore of the program. Alabama’s win over Georgia at Mercedes-Benz Stadium in Atlanta came on a 41-yard connection between two freshmen in overtime.

While one of the players represented the Tide in New York City for the Heisman Trophy, the other suffers from being an afterthought at times.

Not saying that he is neither talent nor insignificant, but he doesn’t get the attention he deserves when discussing guys of leadership.

DeVonta Smith, a four-star in the 2017 class, caught the game-winning pass on “2nd and 26” from Tua Tagovailoa. The Louisiana native does not speak much, in fact, the most he has ever talked was in the media day session before Alabama faced Oklahoma in the Orange Bowl.

Listed at 6-foot-1 and 175 pounds, Smith has become a deep route weapon with a knack for making clutch receptions in critical moments.

Prior to Georgia, he was the one who caught a 10-yard slant pass from Jalen Hurts in 2017 and turned into a game-winning, 26-yard score versus Mississippi State at Davis Wade Stadium (Starkville, Miss.) in the 2017 season for Alabama.

A hamstring injury bothered Smitty at times last year, but when healthy he is Tagovailoa’s biggest X-factor on the outside. This proved true in the CFP semifinal against the Sooners, as he totaled six receptions for 104 yards (team-high) and a touchdown in the Tide’s 45-34 win.

He finished the season as one of five targets with 500+ yards receiving – tallying 693 yards with six scores on 42 catches. Following his freshman year, when he averaged 22.3 yards a catch, Smith posted an average of 16.50 yards per reception in 2018.

Twenty-six of his grabs went for either first downs or touchdowns (62 percent) and 14 of his catches went for 20 or more yards.

As one year of football separates Smith from the NFL Draft, he has an opportunity to join his teammates in Jerry Jeudy and Henry Ruggs III as potential Top-20 picks.

A healthy Tagovailoa and an experienced offensive line (aside from center) looks to set Smith up for a strong push.

Alabama RB has developed a mixture of speed and power to his game
T.J. Yeldon signs two-year contract with Buffalo Bills
To Top
%d bloggers like this: