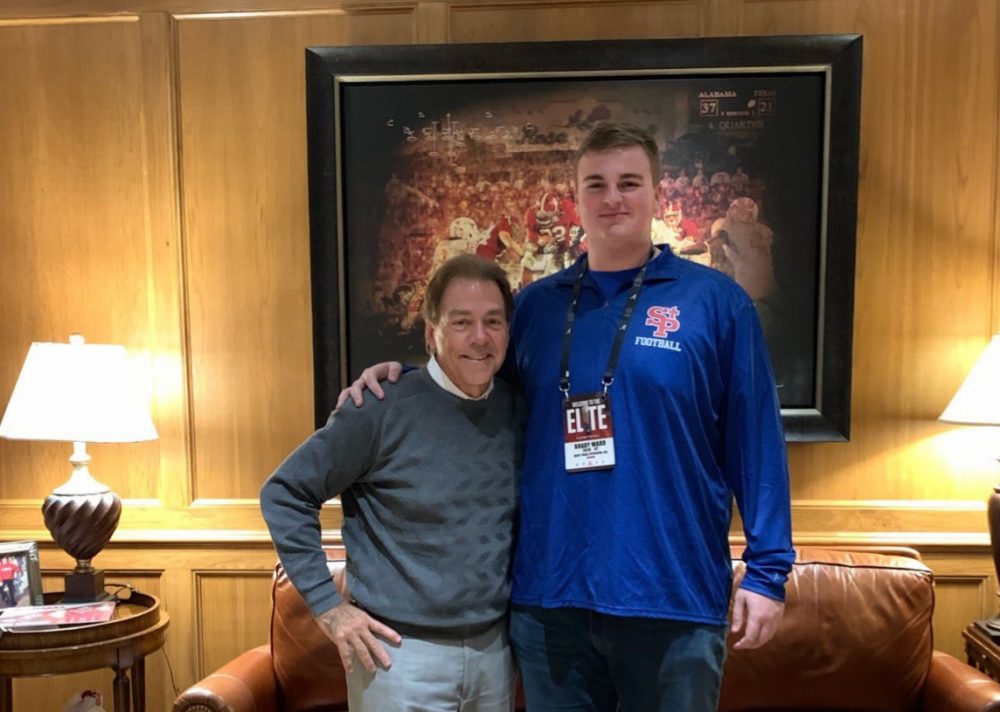 Ward is a 6-7 323-pound offensive tackle out of Mobile, Alabama,. He received an offer from Alabama last month on an unofficial visit. Sunseri’s honesty hit right at home with Ward during their conversation.

“It was great,” Ward said. “He is a cool man. He does not sugarcoat anything. He is honest and tells you what you are doing good and what you need to work on. You know where you are with him. I like him because he makes you better.”

This is not the first time a recruit has praised Sunseri for his honest and direct attitude. Several recruits told Touchdown Alabama Magazine, Sunseri is one of their favorite coaches on Alabama’s staff at the Nike Opening Regional in March. However, he is not the only member of Alabama’s staff expected to visit Ward during spring practice.

The Tide’s offensive line coach, Kyle Flood, is scheduled to visit Ward later this week. Alabama is showing Ward they want him to be a part of their 2020 class and Saban has even expressed how impressed he is with Ward’s development.

“He told me he liked the way I had improved over the years since he has been following me,” Ward said. “He said he loved watching my development and that I reminded him a lot of Bradley Bozeman. We were both late developers because of our size and just maturing late. He said he was excited to see me continue to grow and develop.”

College coaches are telling ward, where he needs to improve, but he also has some personal improvements he wants to make to better his chances to compete at the next level.

“I Just want to keep getting better at everything from hand placement to the technical side of it,” Ward said.

Ward possesses the size to play immediately at the next level, but he has some room to improve his game. He moves good for a guy his size and is wide body frame makes it hard for defensive ends to get around him.

Alabama has one offensive lineman in the 2020 recruiting class in Seth McLaughlin. The Tide is expected to land a total of three to four offensive lineman after landing five in the 2019 class. A commitment from Ward would be a huge addition, figuratively and literally, for the Tide.

The Tide will host ward later this month and it could be the nail in the coffin the Tide needs to secure a commitment from Ward.

Alabama football: Crimson Tide defensive line may be the surprise for 2019
To Top
%d bloggers like this: