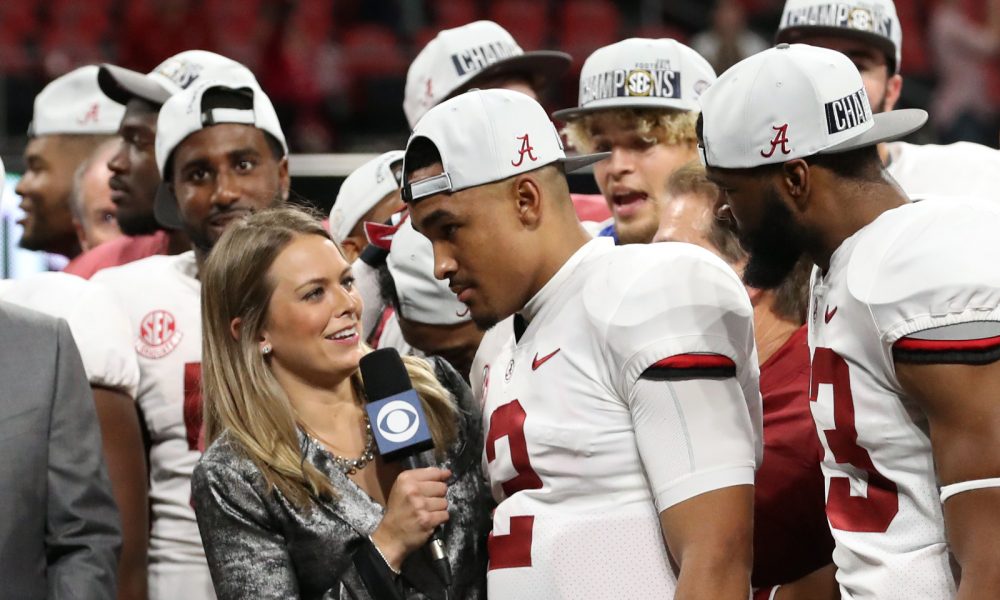 This article is being written as a rebuttal to a previous story.

He is no longer at the University of Alabama and while an article was written last week on how his presence “hurt” Alabama football last season, this piece offers a rebuttal on how Jalen Hurts was actually a benefit.

Was it tough not seeing the Crimson Tide hoist the College Football Playoff trophy as national champions? Of course, it was. Was it disappointing to not see Tua Tagovailoa be awarded with the Heisman Memorial Trophy? No doubt about it.

It is easy to play the blame game when things do not work according to plan, but it serves us better when we are rational in our approach. While I thoroughly respect the opinion of Larry Burton as a colleague and elder statesman, I disagree with some of the points he had on the native Texan and current Oklahoma quarterback hurting the Tide during the 2018 season.

What was the lone nagging issue with Hurts prior to last year?

His inability to be an effective distributor of the ball.

From his childhood in West Virginia to where he is as a head coach, Nick Saban has never developed a quarterback. He has been a defensive mind throughout his tenure and probably wants no parts of what happens on the other side. Before last season, Alabama had one offensive coach to operate as a miniature CEO.

Although each position has its own coach, the players and coaches would run information by the coordinator – and then he would relay the message over to his guys under the second job title of “quarterbacks’ coach.”

The 2018 run with Dan Enos made a huge different for more than Tagovailoa.

Hurts benefited from the nation’s top-ranked pass efficiency offense (197.34 rating) and sixth-best passing offense (323.6 ypg) with completing 72.9 percent of his throws and tossing for eight touchdowns to two interceptions.

No one was able to get Hurts to have confidence in his arm before Enos, and it was with the current University of Miami offensive coordinator that he thrived in the Southeastern Conference title game against Georgia with two total scores.

Hurts converted multiple third downs with his arm, while his 10-yard touchdown toss to wide receiver Jerry Jeudy tied the game at 28 in the fourth quarter. He added a late rushing score that won the game for the Tide, sending it to the College Football Playoff for a fifth straight time.

Fans of rival programs and national media roasted Saban for trying to hang on to Hurts, but at the same time, you had people ripping into the quarterback for stating his thoughts on the competition in August camp.

The situation between Hurts and Tagovailoa was never a distraction to the team.

It was, however, a major distraction for different media outlets.

Plenty moments were captured last season of Tagovailoa and Hurts embracing each other and showing full support of one another. When the Tide got Hurts a coach to mold his arm, he greatly helped the school in delivering it to its sixth conference championship under Saban.

To revisit 2016 for just a moment, Hurts as a freshman displayed leadership by energizing players on defense and special teams.

He would pump up veterans such as Ryan Anderson, Jonathan Allen, Reuben Foster and Tim Williams among others, which was the reason behind him having much respect from them.

No disrespect toward Tagovailoa, but he has not been spotted fellowshipping with players – opposite guys on offense – in his first two seasons.

If Saban decided to play Hurts earlier in the meeting with Clemson, Alabama would have had a better chance of least making the game interesting. He battled twice against Brent Venables, so Hurts knew the concepts of the Tigers on defense.

Tagovailoa had never seen the looks provided from Clemson and with Hurts having more power in his lower body, he could have tired the Tigers’ defensive front with the run and mix in some vertical plays to receivers.

Let’s start this section with stating that I like Mac Jones as a player.

He comes from a great family (of which I have met on occasions) and has a pretty good skill set as a quarterback. Jones will have opportunities this season to showcase what he can do, but Burton’s thought of him doing just as well as Hurts if he was the No. 2 guy is wrong.

For the Florida native, Jones was not ready for obvious reasons.

The first of those was he did not have the SEC weight. Players like Hurts, Tagovailoa, Jacob Coker and even AJ McCarron (215 pounds) had size and muscle to take hits and live to fight another game.

Jones enrolled at 190 pounds and has gained just 15 pounds in three seasons, as he is listed at 205.

He is starting to pack more muscle in the offseason, but will it be enough?

Confidence within the offensive system is another thing the former four-star lacked. Numerous moments occurred at practice where Saban got on to Jones and it took different teammates to make sure that he did not get overly frustrated with himself.

Some players are better suited for games and others are solid in practice; nevertheless, Alabama calls for you to master both. He has gotten better with his leadership and consistent focus on the field, but to call on him last season would been too much. Would sticking Jones into the SEC title game versus the Bulldogs (with Tagovailoa out) brought the same outcome as Hurts?

No. Especially with Hurts facing Georgia the previous year in the CFP title game and him understanding the tendencies of Kirby Smart. He will be fine next fall, but Jones was not prepared for the moment in 2018.

The Heisman Trophy is a great honor, but if one were to ask Tagovailoa, his teammates, Alabama coaches and Tide fans, everyone would be much happier with a CFP title ring.

A bronze trophy is not making your finger and furthermore, the returning junior has two more shots to win it (should he return for his senior year).

Injuries kept Tagovailoa from winning the Heisman, not Hurts. During the first eight to nine games, the native Hawaiian could not be stopped as he compiled 43 touchdown passes to no interceptions.

After a knee injury in a matchup with Arkansas, Tagovailoa’s confidence took a hit.

He was not able to assert himself in maneuvering the pocket to make throws and his inability to firmly plant his feet led to six picks down the stretch. Kyler Murray of Oklahoma won the Heisman, but he lost in the semifinal.

He became the No. 1 pick of this year’s NFL Draft; nonetheless, having that status along with Heisman winner and CFP Champion would have placed him in a unique category.

In reflecting back to Tagovailoa, he needed Hurts against Georgia – due to Smart scheming him out. Upon Hurts reaching the end zone for the game-clinching score, Tagovailoa was where he always was: next to his buddy in celebration.

He does have unfinished business, but it’s not for the Heisman.

As a child, I was taught to see things through to the end.

It may not be what you desire, but perseverance builds character.

Jalen Hurts could have taken the redshirt after four games and went somewhere else; however, he would not have received the same coaching that Enos delivered.

Also, when a man sticks around and competes – he raises his stature among his teammates as a leader.

Hurts was not going to give up on something he helped start, and certainly that did not hurt Alabama.

What if it did not have him and Tagovailoa suffered a season-ending mishap? The Tide do not win a conference title and surely do not appear in the CFP. He has moved on to Oklahoma, but Hurts never “hurt” Alabama in 2018.

How Jalen Hurts Being Gone is a Good Thing For Alabama and How He Hurt Them Last Season
Why Letting College Players Get Paid for Likeness or More Could be Bad
To Top
%d bloggers like this: