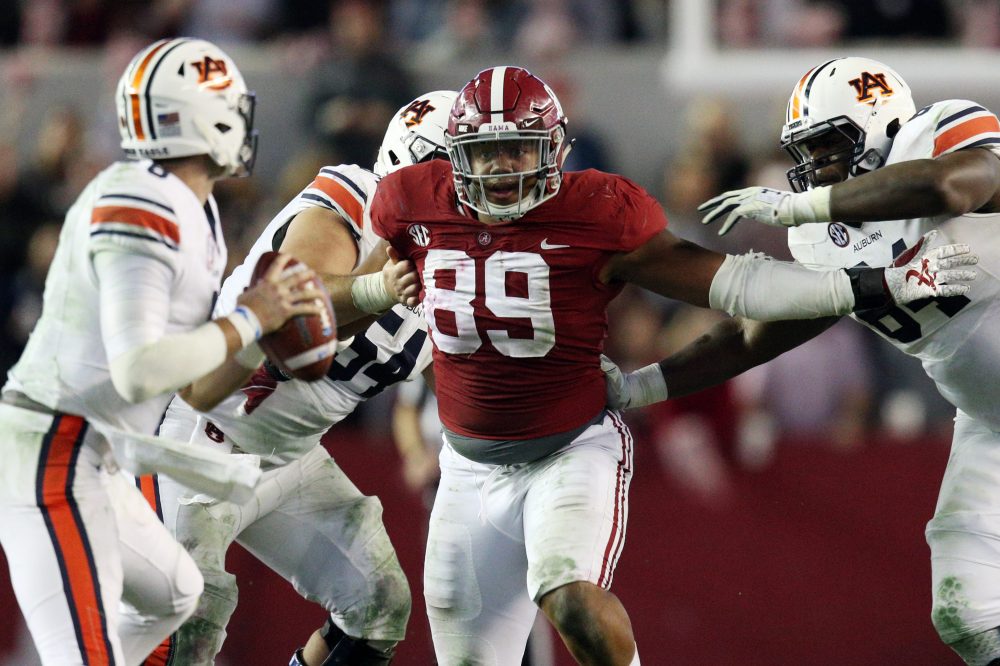 The next defender is LaBryan Ray.

LaBryan Ray may have been one of the most overlooked players on Alabama’s defense in 2018. Ray was a key rotational piece among the crimson tides defensive line and his production backs it up. For a rotational player to record nearly 40 tackles is pretty impressive.

Ray not breaking into significant playing time last season is no knock against him though. With guys like Raekwon Davis, Isaiah Buggs and Quinnen Williams playing ahead of you, it would be difficult for any player to take time away from those three.

But facet of Ray’s game which was able to help him get on the field as a sophomore was his ability to defend the run game. I’ve mentioned it so many times throughout our player spotlights that nearly every member of the Alabama front seven is great at defending the run. That’s because if a team can control the line of scrimmage on either side of the ball, their chances of winning go way up. And having a player like Ray definitely helps in that department.

The former five-star recruit out of Madison, AL had arguably his best game against the Citadel; a run-heavy team that gave the tide some trouble during the first half. Ray was able to come in and excel as he recorded a season-high seven tackles during that game.

As much of a help Ray was in a rotational role in 2018, this season he will be called upon to contribute as a starter and leader of the defensive line. Of course, the experience he gained last year is valuable no doubt, but starting for an entire season is surely a different task.

Now teams will be able to game plan for the 6’5″ mountain since his name will be listed at the top of the depth chart. Another area of concern to keep an eye on was his production against the elite competition Alabama faced in 2018. Against Texas A&M, LSU, Mississippi State, Oklahoma and Clemson, Ray tallied just five tackles. Even though he wasn’t starting during those games, you’d prefer to see a little bit more noise made.

To be fair Ray, in fact, had a huge game against Auburn where he had nine total tackles and a sack when he started in place of an injured Isaiah Buggs.

But what is a definite area which needs improvement is his pass rush. Ray definitely excels on first and second down but once third comes around, Nick Saban and the defense usually opted for a better pass rushing option. It’s not to say that he won’t be able to improve on this aspect of his game, but now that he will be a starter this season he will have to really prove that he can stay on the field.

LaBryan Ray is expected to step right into the role of Isaiah Buggs and truly wreak havoc on opposing teams rushes. Other than Davis, he has the most experience among the defensive line so he should be called upon to mentor the younger players of the unit. Although he may not finish the season as an awards finalist, Ray will no doubt be an important piece of the defensive front.

If Ray was to declare for the 2020 NFL draft it would be surprising, to say the least. Although he could very well have a break out season this year, as of right now he would probably be best suited to stay in school. But if he were to declare this season he would likely be a third or fourth round pick at best.

With Ray’s ability to defend the run along with already being groomed into the rotation he will surely be an important part of the defense’s success. Look for young players like D.J. Dale and Ishmael Sopsher to look to Ray as a potential leader as well. If he can improve on his pass rushing skills, it will only help his draft stock and also make Alabama that much more dangerous.