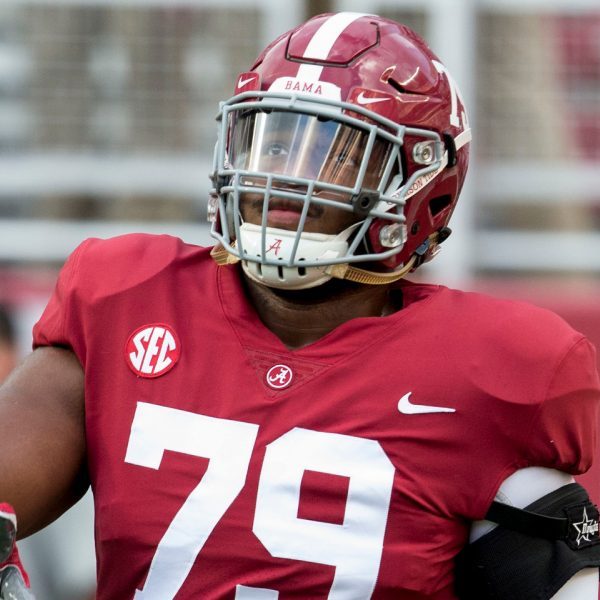 Summary: He becomes behind a lineage of centers under Nick Saban at the University of Alabama – including Antoine Caldwell, William Vlachos, Barrett Jones and Ryan Kelly – however, Chris Owens will have his chance to anchor Alabama’s offensive unit.

A product of Lamar High School, Owens was listed at the No. 10 offensive guard prospect nationally via 247Sports Composite rankings.

He redshirted his initial freshman season and played in three games in 2017, but he earned more field time last year through 13 contests.

He saw snaps behind Ross Pierschbacher at center and helped out at tackle, filling in for either Jonah Williams or Jedrick Wills.

For Owens, his work ethic sets him apart. Saban praised him during Alabama’s spring practices as he gives a ton of effort and holds the front line together.

Along with his power to move guys off the ball, Owens is more athletic than what people give him credit for.

His ceiling can potentially be that of Caldwell’s, who received honors as a consensus All-American and first-team All-SEC selection in 2008.

He blocked for the first 1,000-yard running back of the Saban era, as Glenn Coffee totaled 1,383 yards that year.

Summary: Lack of quality exposure at center is the lone weakness for Owens.

With him playing at center and tackle last year, he did not get a chance to develop the center/quarterback exchange and get a feel for his signal caller’s cadence. Both aspects will occur in the fall and while it will take time, Owens is a fast learner and will succeed.

Also, him being able to direct traffic upfront, call out protection schemes and dissect where defenders may be coming on a blitz will be new for him.

Owens has to make sure he remains in step with Tua Tagovailoa in keeping the Crimson Tide ahead of the down and distance.

Honestly, Owens’ expectations should to get better with each rep.

Of course, he wants to be a dominant center as a first-year starter. Owens would like to help Alabama have a 1,000-yard rusher and continue told mold Tagovailoa’s progression.

Individual awards such as the Jacobs Blocking Trophy, Rimington Trophy and Outland Trophy are on his mind; however, a College Football Playoff National Championship trophy is first on Owens’ list.

He also expects to be part of an offensive unit that proves national media wrong and wins the Joe Moore Award. With Georgia’s front line getting all the offseason attention, first-year assistant Kyle Flood will have Owens and others ready to steal the show.

On one hand, Owens may not declare for the draft after this season – due to the fact of more experience is needed for him. Although people point to Quinnen Williams only needing one year, it is good to point out the mass of players that taught Williams how to become a successful defensive lineman before his time came.

When you have A’Shawn Robinson, Jonathan Allen, Dalvin Tomlinson, Da’Ron Payne, Jarran Reed and Ryan Anderson preparing you, one has no choice but to be ready for success.

Then again, Owens could be one of those rare players to turn in a breakout year and capture the focus of all NFL pundits.

Should he do this, a second-round grade wouldn’t be surprising.

He has big time athleticism and is highly intelligent.

Owens is one of many players that Tide fans will carefully watch.

He brings the size, athleticism and leadership needed to be strong at center, and having this experience this season will benefit him. One positive he can toward is having two guys at both tackle positions – Jedrick Wills and Alex Leatherwood – to help and encourage him.

Wills enters his second full season as Alabama’s starting right tackle, while Leatherwood moves back to his natural spot at left tackle.

He has the support of his coaches and teammates, so Owens is prepared to roll once fall camp arrives.

The Process: Crimson Tide Recruiting With Justin Smith
Former UA standouts return to campus to prep 2019 team for this season
To Top
%d bloggers like this: