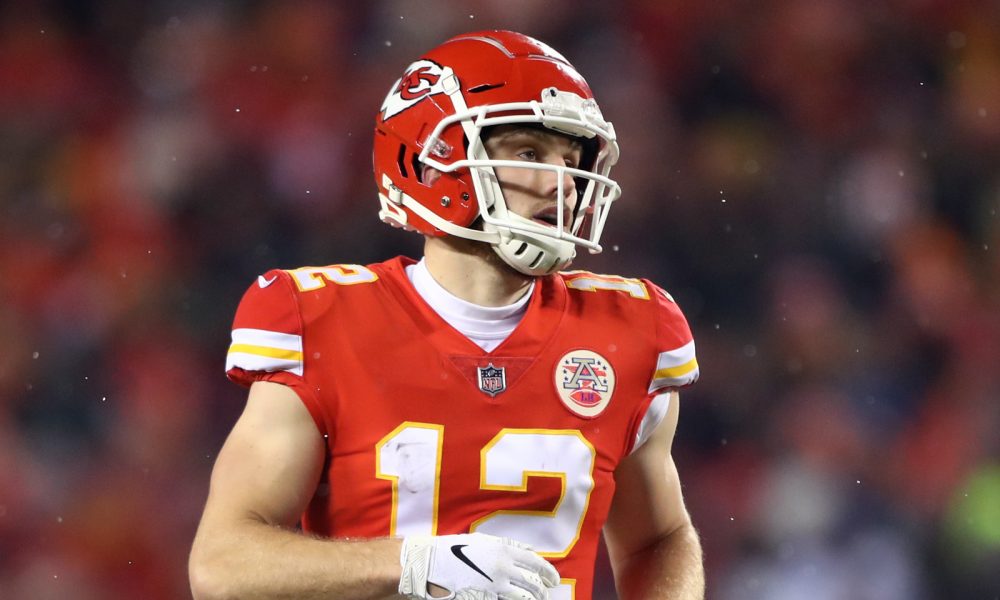 After not being selected through seven rounds of the 2017 NFL Draft, he found a home with the Chiefs and displays strong potential.

In his lone season with the Crimson Tide, he caught 15 passes from Jalen Hurts for 214 receiving yards with four touchdowns in 15 matchups.

His work at receiver and on special teams assisted the Crimson Tide to the College Football Playoff, where it fell short of winning a national championship. Despite having Tyreek Hill and Sammy Watkins outside, it has been Dieter impressing reporters and fans this offseason.

According to BJ Kissel, a reporter for the Chiefs, he spoke very highly of the 6’3” weapon during his Wednesday session of the “In the Trenches” podcast.

Kissel opened the conversation with stating how Dieter has a “phenomenal opportunity going into training camp” this time.

One of the WRs you want to keep an eye on at #ChiefsCamp is @GehrigDieter.

“I’ve talked to him and he knows this offense,” Kissel said of Dieter. “He is more comfortable in this offense than at any other time in his career football. He knows where he is supposed to be and he knows all the wide receiver positions.”

One of the things that makes Andy Reid much like Nick Saban is how both guys weigh the mental aspect of the game higher than the physical aspect. In Reid’s system, he wants receivers dissecting coverages, finding open space, working back to the quarterback, and making plays.

Per Kissel, Reid looks at the receiver position as 70 percent mental and 30 percent physical.

While he has a great friendship with Patrick Mahomes II at quarterback, Kissel said the conversation on Dieter needs to turn into one that discusses how he is a “very, very good football player” and how he has a chance to be a “key part of this offense.”

The departure of Chris Conley to the Jacksonville Jaguars leaves Dieter, Marcus Kemp and Demarcus Robinson fighting for the last spot on the field.

He played in four games in 2018, but Dieter is looking for more.