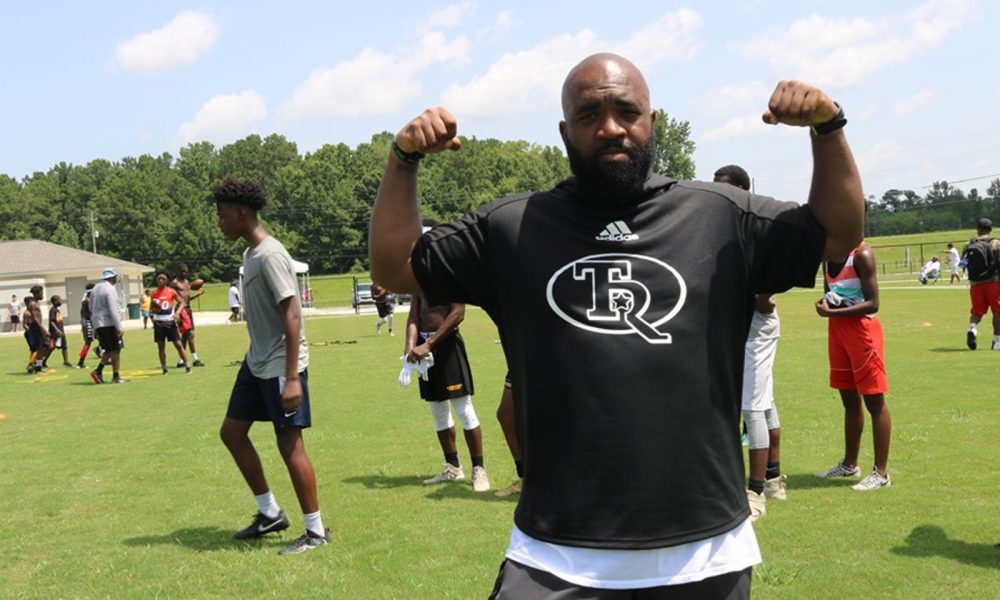 The month of July started with a sweltering Saturday.

While yours truly of Touchdown Alabama Magazine had second thoughts on the destination, there was one man who sought neither cool air nor a bottled water. For Dezmond Willis, he is well respected by many – especially those in Prattville, Montgomery, Wetumpka and surrounding areas.

With triple digit temperatures, due to the heat index, Willis and his team were at the Wetumpka Field Complex on the first weekend of the month.

In his second annual youth camp, he brought in coaches, former pro athletes and college players to help recruits in the 2020-22 signing classes get ready for the next level at each position.

A mixture of laughs, smiles and cameras were present, but all Willis saw was high competition and the next wave of greatness.

Despite it being an area where many do not get discovered, Top Rated has become an outlet for athletes to have an opportunity. It is more than actions on the field for Willis, his desire is to have each individual excel in the classroom, value family and value God first and foremost.

Of the 2020 guys he trains, three – Issac Nickson, BJ Smith and Otis Porter – are collegiate stars in strong position for the NFL Draft. Willis has TJ Jackson, product of Stanhope-Elmore High School and a 2020 verbal commitment to Troy. Tre Cutler, who attends Autauga Academy, is another 2020 prospect that has offers from both Faulkner University and South Alabama.

Jeremy Thompson, a student-athlete at Stanhope-Elmore, is a 2020 guy that is looking for an offer and should get one soon. As for 2021, Willis has William Whitlow Jr. of Stanhope-Elmore who has an offer from the University of Tennessee. Last, but not least, Nick James (Prattville) boasts offers from two Southeastern Conference schools – Tennessee and Auburn – for 2022.

Above all else, his love of seeing young men succeed stars at the University of Alabama.

Before he became a first-round pick of the 2017 NFL Draft, O.J. Howard was mentored by Willis as a five-star tight end from Autauga Academy.

Prior to graduating Robert E. Lee High School and going to UA, Henry Ruggs III spent time with Willis. Regardless of him spending his final two years of eligibility at Tennessee, Brandon Kennedy was first at Alabama in its 2015 signing class.

He was on two national championship teams and before arriving on campus, Willis trained him to be a star at Wetumpka High School.

Wilson and Hamilton are extensions of Willis.

Both guys were selected in the fifth and sixth rounds respectively at the NFL Draft.

Hamilton looks to put together a dominant full season with the Redskins, and Wilson anticipates taking Cleveland’s defense to new heights in the AFC. Ruggs enters his junior year at wide receiver this fall and a strong performance could land him with value as a top-15 pick.

At the end of the day, Willis is about the players.

Nice catch made by one of the participants at the Top Rated Camp: Photo via Stephen Smith – TDA Magazine

He has a bunch of guys in the next three recruiting classes that are incredible talents and Nick Saban may need to get a look at them.

Top Rated is excitement for him and it’s a safe haven for his athletes.