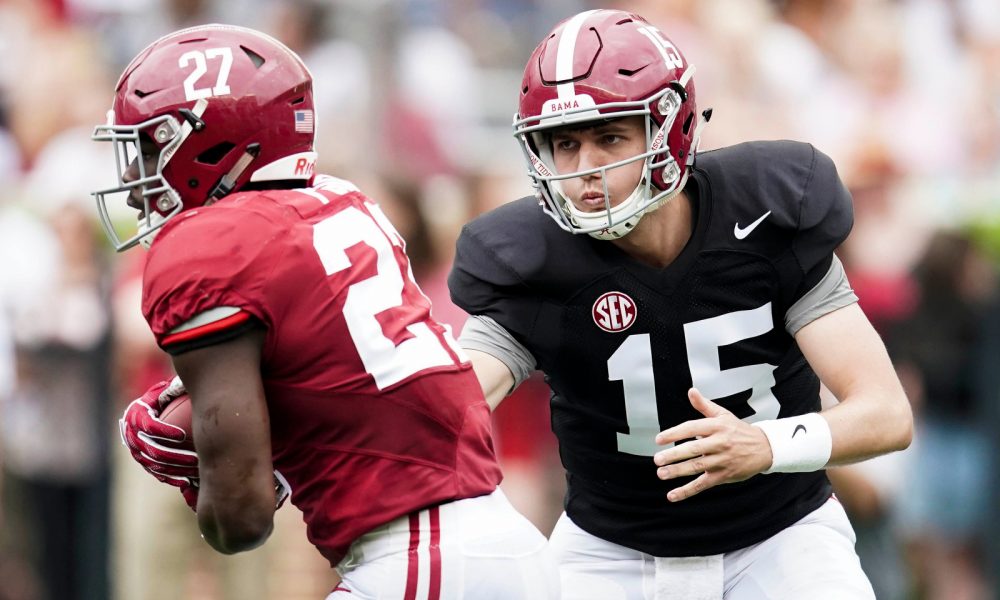 Should it have quality production from its young running backs, the loss of Trey Sanders (foot) for this season will not be as bad for Alabama football.

With Sanders not scrimmaging and Brian Robinson getting dinged up, a big opportunity was made available for Jerome Ford and Keilan Robinson to get reps.

Ford, a freshman, played in four games last season – prior to redshirting. The three-star and native Floridian was the lone prospect at the position the Crimson Tide signed in 2018.

Regarded as an “all-purpose” back, Ford served on scout-team in 2018 and provided Alabama’s first-team defense with great looks.

Listed at 5-foot-11 and 212-pounds, he added muscle in the offseason and has improved his power.

Ford came in as an elusive, shifty runner with good hands, but the added power between the tackles makes him a complete player for the Tide.

Robinson, a true freshman, comes in underrated from Washington, D.C.

A product of St. John’s High School, the four-star packs a punch – despite weighing in at 185 pounds on a 5-foot-9 frame. He guided the program to the 2017 Washington Catholic Athletic Conference championship as a junior and hails from the same school as current Tide teammate, Terrell Lewis. Robinson possesses a low center of gravity and has breakaway speed in space.

Nick Saban thought both played stepped up on last week, but he said Ford was “probably the team’s leading rusher.”  As for Robinson, he said the second back of the 2019 class had some “explosive runs” and “played fast.”

“He probably gives us something that some of our other guys don’t have when it comes to just being quick, fast and elusive,” Saban said of Robinson.

According to sources, Ford got more work yet Robinson is nothing to sneeze at.

“People are sleeping on him, but he is really good,” sources said of Robinson. “He looks really quick and that guy can get downfield.”

The idea would be for either Ford or Robinson or both to give the Tide with the production it was expecting from Sanders. Both have accepted the challenge and look to continue growing.