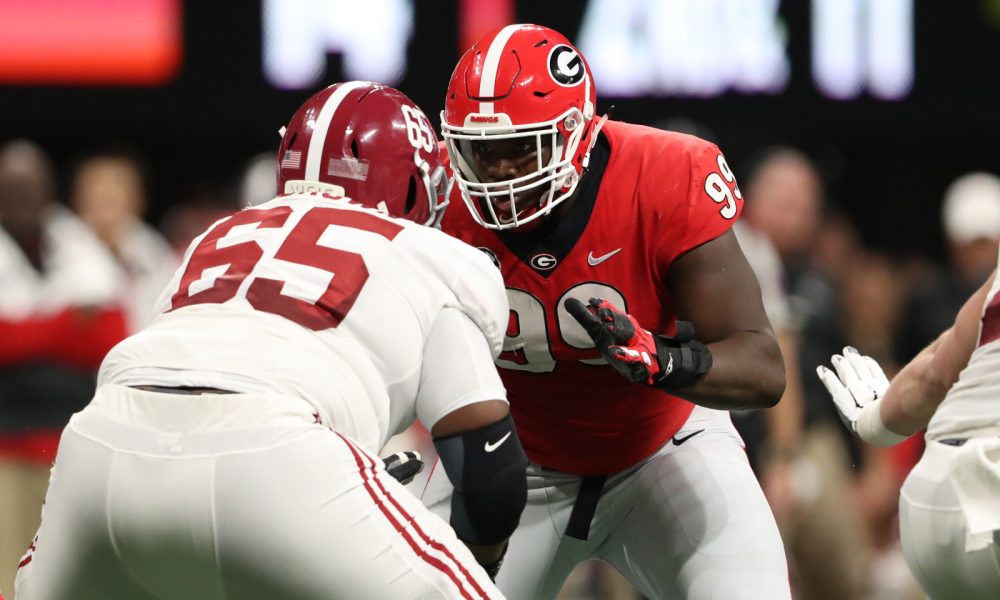 Alabama football has outscored its opponents, 104-13, through the first two weeks of the season, but fans of the Crimson Tide feel like there is something missing.

Despite strong performances from Tua Tagovailoa against Duke and New Mexico State, Alabama has struggled to find consistency in its rushing attack. With the exception of a few explosive plays, the tandem of Najee Harris and Brian Robinson have been nonexistent.

Part of the reason is the Tide lacks a physical presence up front to set the tone in creating opportunities for its ball carriers. With Alex Leatherwood and Jedrick Wills playing on opposite ends of the offensive line, there is not much continuity at all with the interior players.

The combination of Chris Owens, Matt Womack, Emil Ekiyor, Landon Dickerson and Evan Neal have never played together before. After issues versus Duke, Alabama’s coaching staff tried to shuffle the group some – moving Dickerson to center and Womack to right guard last week.

While the run game was a little better in the second half against the Aggies, the Tide was still missing a consistent push and players were getting beat off the ball. Ultimately, the problem stems from it not having its best run blocker and the guy who solidified this unit last season.

He earned the job versus Tennessee and blocked for 545 yards offensively on 59 snaps – including 218 yards rushing. The following week, the Decatur (Ala.) native provided the Crimson Tide with balance against LSU.

In the Iron Bowl matchup with Auburn, the former four-star led the team with five knockdown blocks and assisted the backs to 4.7 yards a carry.

Prior to being suspended (NCAA violation) from traveling with the team to the College Football Playoff, Brown set the edge for 403 yards for the Tide against Georgia in the Southeastern Conference Championship Game and helped Josh Jacobs, in particular, rush for 83 yards with two touchdowns on eight carries.

He averaged 10.4 yards per rush and was named SEC Offensive MVP of the game, as the Tide earned a 35-28 victory over the Bulldogs.

Along with his run blocking, Brown was also strong in pass protection.

The 6-foot-4, 338-pounder did not allow a sack in all five of his starts, which led to Tua Tagovailoa achieving multiple single-season school records and being a Heisman finalist.

Brown is expecting to return the week of Sept. 28, when the Tide hosts Mississippi.

This sets up well, because there is a bye week for Alabama after the matchup with the Rebels and it gives the coaching staff to get Brown back in. With Ekiyor hurt (knee) and Neal struggling, the Tide severely needs Brown at left guard.

If not for anything else, Brown’s return provides Kyle Flood (offensive line coach) with four guys that have played together.

An offensive unit of Leatherwood, Brown, Dickerson (or Owens), Womack and Wills gives balance in run blocking and pass protection.

Seeing how Neal carries the same story as Leatherwood in being more of a tackle than guard, the Tide anxiously awaits Brown’s return.

Are the Miami Dolphins really tanking for Tua?
Amari Cooper deserves a massive deal following his performance against the Giants
To Top