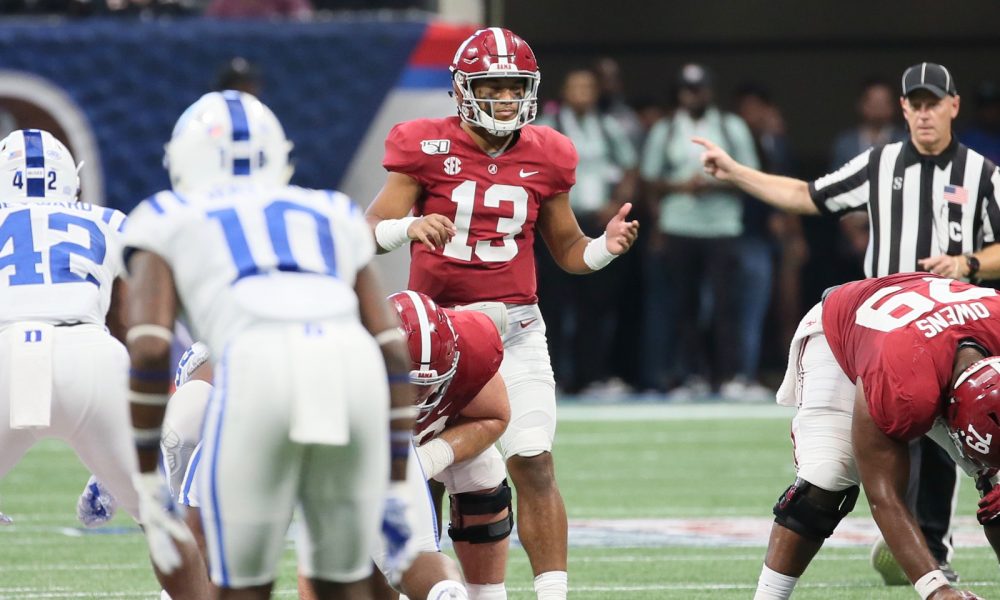 He will have a chance to move up after this week.

Much like 2018, Tua Tagovailoa has been on a roll to start his junior season – completing 42 of 55 pass attempts (76.4 percent) for 563 yards with seven touchdowns to no interceptions.

He has averaged 281.5 passing yards a game in the last two matchups, while compiling a passer rating of 204.34 and anchoring an offense that is totaling 52 points and 557.5 yards per game.

Despite these exploits, Pro Football Focus has the native Hawaiian fourth on its Heisman rankings after week two of the season. Tagovailoa sits behind his teammate, Jerry Jeudy, Jalen Hurts of Oklahoma, and the leader, Joe Burrow of Louisiana State University. He is ahead of Clemson’s Trevor Lawrence, as the sophomore is fifth via the graphic from PFF on Twitter.

Tagovailoa was the runner-up to Kyler Murray in the 2018 Heisman race.

He finished last season as a consensus All-American and is looking forward to silencing a boisterous crowd at Williams-Brice Stadium.

Alabama faces South Carolina on Saturday and despite the Gamecocks having leadership on defense, Tagovailoa has the arm talent and a cast of wide receivers that will frustrate any defense.

It will be interesting to see how much Pro Football Focus will move Tagovailoa, should he produce a masterful effort.